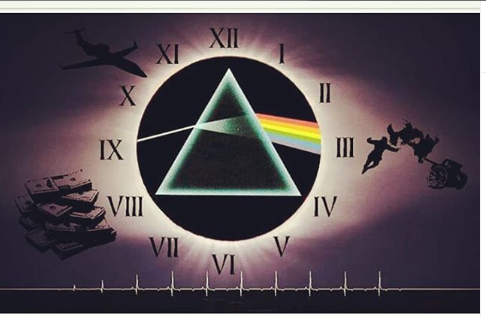 Time IS A Wonderful Song About, Well, -TIME.

But there’s more to it, of course, it is about our lives, and how we spend every second or how we waste it.

Pink Floyd’s Time begins with a man who finds himself in boredom and dull moment in his life. He keeps failing to do anything that has anything but meaning — he keeps telling himself that he’s already staying in his comfort zone, but expecting life to give him something worthwhile or a sense of direction instead of seeking one for himself.

Roger Waters, the one who wrote it discussed in 1982 with Rolling Stone Magazine:

“I spent an awful lot of my life — until I was about twenty-eight — waiting for my life to start. I thought that at some point I would turn from a chrysalis into a butterfly, that my real life would begin. So if I had that bit of my life to live again, I would rather live the years between eighteen and twenty-eight knowing that that was it, that nothing was suddenly going to happen — that it was happening all the time. Time passes, and you are what you are, you do what you do.”

The man resembles Roger Waters who failed to put his time in good use – and this “TIME,” he wasted a huge chunk of his life. He witnessed something bigger than life, but he can only go in which he only wanted to see, never realizing that he’s the only one who can give his own directions in life. He’s having a hard time reaching his goal which is the: MEANING TO LIFE.

We have all experienced this moment in our life, where we waste a huge second, never realizing that TIME is a journey through life, and acts as a threat and inspiration for anyone who ignores or giving it importance.

Remember, TIME IS GOLD. So don’t waste any minute of it, and do something valuable like LISTENING TO PINK FLOYD’s TIME below: