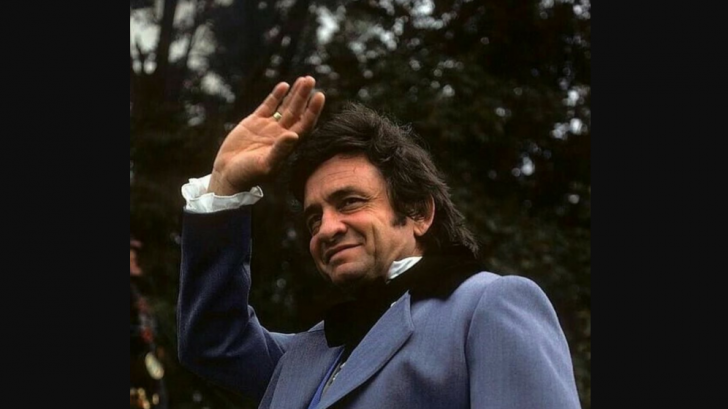 Johnny Cash was one of the legendary singer-songwriters in the annals of rock and country music. Known for his cowboy image and all-black outfits, and best known for his music “Folsom Prison Blues,” recorded in 1955, and his performance at Folsom State Prison in California.

Cash was a country star and also recorded some of the best rock, folk, and gospel music. He was born on February 26, 1932, in Kingsland, Arkansas, and a son to Carrie and Ray Cash.

Before he started his musical journey, he was first introduced to country music through the radio and started writing his own songs at the age of 12. Growing up near Memphis in Dyess – he was devasted after his older brother Jack killed in a sawmill accident, and at the time, Cash was just 15 years old.

The country legend wrote in his 1997 autobiography “Cash”:

“He’s been there in those songs we sang at his funeral…and those songs have sustained and renewed me my whole life…They’re powerful, those songs. At the time they’ve been my only way back, the only way out of the dark, bad places.”

In 1955, he started his musical journey when he managed to land an audition with Sun Records owner Sam Phillips – Cash performed gospel music but failed to win the favor of Phillips. Cash returned back, with a vengeance, a secular song he had written – the famous “Hey Porter.” And with that song, the young man, would-be legend, won a recording contract with the man who had made Elvis famous. A few months later, he released his first single, “Hey Porter” which debuted at No. 14 on the country charts.

Cash became one of the best selling recording artists of all time and was awarded Lifetime Achievement Award in 1999, and even his life became the main subject of the film “I Walk the Line” which also won an Oscar.

In 2002, a year before he passed away, Cash made a cover version of the Nine Inch Nails song “Hurt,” including it on “American IV: The Man Comes Around.” A record that became one of his biggest accomplishments. The music video featured his wife June Carter Cash, who, in 2003, died following heart surgery.

Cash was so devastated by losing his life companion, he quickly followed her on September 12 of the same year due to complications from diabetes.

After his death, Bob Dylan praised him as one of the best musicians of all time:

If we want to know what it means to be mortal, we need look no further than the Man in Black. Blessed with a profound imagination, he used the gift to express all the various lost causes of the human soul…Listen to him, and he always brings you to your senses. He rises high above all, and he’ll never die or be forgotten, even by persons not born yet—especially those persons—and that is forever.