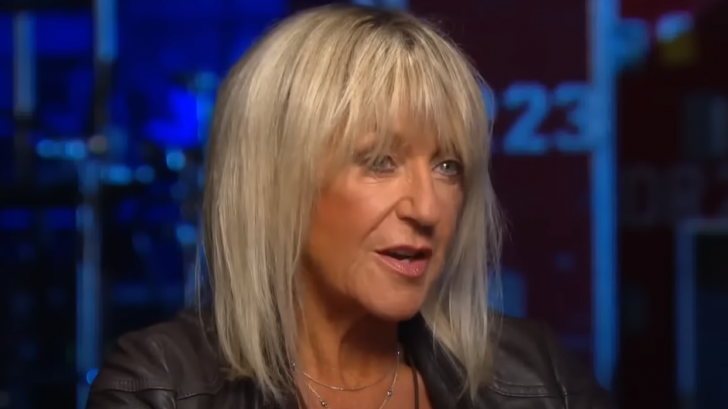 Christine Anne McVie, an English musician, and vocalist was born on July 12, 1943. She was most recognized as a keyboardist and singer for the band Fleetwood Mac, which she joined in 1970. Three solo albums were also released by her. Her lyrics were primarily about relationships and love. She was an “unabashedly easy-on-the-ears singer/songwriter, and the key mover behind some of Fleetwood Mac’s biggest songs,” according to Steve Leggett of AllMusic. Eight songs, including “Don’t Stop,” “Everywhere,” and “Little Lies,” that she wrote or co-wrote were included on Fleetwood Mac’s 1988 Greatest Hits.

McVie won the Brit Award for Outstanding Contribution to Music and was inducted into the Rock and Roll Hall of Fame in 1998 while still a member of Fleetwood Mac. She chose to quit the band that year after over 30 years of service and lived in semi-retirement for about 15 years. In 2004, she issued a solo album. She first performed live with Fleetwood Mac in September 2013 at London’s O2 Arena before reuniting with them in 2014 ahead of their On with the Show tour.

McVie was given a Gold Badge of Merit Award by BASCA, now known as The Ivors Academy, in 2006. She was honored with the Trailblazer Award at the UK Americana Awards in 2021 after receiving the Ivor Novello Award for Lifetime Achievement from the British Academy of Songwriters, Composers, and Authors in 2014. Additionally, she was the winner of two Grammys.

Born on July 12, 1943, Christine McVie, originally known as Christine Perfect, was raised in a musical family (per Smooth Radio). Her father is a concert violinist and music professor, while her grandfather was a professional organist. Naturally, Christine started piano lessons at an early age, but she wouldn’t become genuinely interested in music until much later. On the other hand, Beatrice, her mother, was a spiritual healer, medium, and psychic. McVie said that she was the genuine article.

The early years of Christine McVie’s life were spent in the English countryside. Prior to relocating to Birmingham for her father’s employment as a music teacher, the Perfects, according to LancsLive, resided in the tiny Lake District settlements of Greenodd and Bouth, which are now both regarded to be within the boundaries of Cumbria County. Before reaching the bigger River Leven, the River Crake travels through Greenodd, a little settlement that was once a harbor for exporting copper, limestone, and gunpowder. One of these streams came dangerously close to taking McVie’s life.

She spent the night of her wedding with Joe Cooper

Peter Green, a guitarist and a founding member of Fleetwood Mac, served as Christine and John McVie’s best man during their 1968 nuptials. In order to be near to Christine’s mother, who had become unwell, they chose a local Birmingham hotel for their honeymoon, as Christine described to The Guardian. By chance, the great blues singer Joe Cocker showed up there that evening. He was a guest at the same hotel and joined us in getting wasted the night of our wedding,  “until we kicked him out,” she said.

McVie spent a lot of time hanging out with the members of her husband’s band, Fleetwood Mac, when they practiced in a rented location called Kiln House in 1970 after leaving Chicken Shack to spend more time with her marriage. She remarked to Robin Eggar in a 2004 interview for S Magazine (included in “Fleetwood Mac on Fleetwood Mac”) that while making the vividly colorful, intricate drawings that served as the cover artwork for the band’s 1970 album “Kiln House,” she reconnected with her creative side. “I did them to add to my many talents,” she said of the artwork, adding, “Well, questionable talents. I’d smoked a joint when I did that.”

Prior to joining, she was a Fleetwood Mac fan

Christine McVie was familiar with the Fleetwood Mac sound because she shared the stage with the band and wed one of its members. She was a big fan, in fact. She admitted to being particularly enthralled by the antics of then-vocalist Jeremy Spencer and then-guitarist Peter Green in a 1984 interview with Rolling Stone. She would see them perform anytime she had time off from work. “They were my heroes, you know, and had been for years and years,” in a 2021 radio interview, she revealed to Johnnie Walker.

The popularity of Fleetwood Mac began to grow as the 1970s went on. The band members reportedly moved to Los Angeles in 1974 in order to explore fresh prospects and even greater success, according to Rolling Stone. Initially, Christine and John McVie shared a party house with John Mayall, a friend of John’s and a former bandmate, where they engaged in antics uncannily reminiscent of those in “Almost Famous,” but soon after, Christine McVie bought her own exclusive and opulent Beverly Hills home.

Before joining Fleetwood Mac, she spoke with Stevie Nicks in an interview

After listening to the “Buckingham Nicks” record, Fleetwood Mac’s drummer and band leader Mick Fleetwood reportedly knew he wanted American guitarist and vocalist Lindsey Buckingham to join the group. For Buckingham to join Fleetwood Mac, there was one need. He insisted on bringing along his other half, Stevie Nicks, his vocalist, and lover. Fleetwood urged McVie to meet with Nicks and essentially interview her because she was worried that having two women in the band may be difficult. The meeting’s conditions were straightforward: Nicks couldn’t join Fleetwood Mac without McVie’s consent.

Christine McVie’s ballad songbird was out of this world

On Fleetwood Mac’s legendary 1977 album “Rumours,” Christine McVie’s piano ballad “Songbird” provides a touching moment. It later became a well-liked closing song at the band’s live performances (per Rolling Stone). However, due to the song’s dubious creative process, McVie called it “a strange little baby” in an interview with The Guardian.

By 1973, John’s drunkenness and the McVies’ continuous contact as members of the same band had put a strain on their marriage. Christine then began an affair with Martin Birch, the band’s sound engineer, stating to Uncut in 2003, “I was seeing more Hyde than Jekyll.” After that, they almost never communicated, exchanging words only when necessary to keep on playing. In 1975, they decided to call it quits in the middle of their tour. The two reportedly split in 1976 but continued to get along as musicians, according to Rolling Stone.

Curry Grant, the charming lighting director for the band, and Christine later started dating. Carol Ann Harris, Lindsey Buckingham’s then-girlfriend, asserts that Grant was a known playboy who had concentrated his attention on Christine during the “Rumours” era in her book, “Storms: My Life with Lindsey Buckingham and Fleetwood Mac.” Despite the difficulty it produced in the band, the two remained together for three years.

She had always found touring difficult

In 1998, Christine McVie abruptly departed Fleetwood Mac and practically disappeared, shocking the entire globe. She said that her dread of flying had developed into a panic-inducing phobia in a 2014 interview with Rolling Stone, which made touring challenging. She had grown weary of the volatility as well.

Christine McVie performed while standing at the back of the stage, playing her keyboards, synthesizers, and organ, with the exception of when she entered the stage for several of her songs, especially “Songbird” and “Everywhere.” She had so many instruments in her setup at once, according to a 1980 edition of “Contemporary Keyboard,” that she was practically undetectable on stage. “It was like being in a prison,” she joked to the magazine, “People would look and say, ‘Christine is back in her cave.'”

She chose her career over motherhood

Christine McVie was twice married but never had children, much as she would have loved to. Being a woman in music, McVie discovered, comes with a number of concerning double standards (per The Guardian). First, few of her partners were aware of or supportive of her professional expectations. In the 1970s and 1980s, when males predominated in music and women were still expected to care for their husbands’ needs at home, McVie and Stevie Nicks were regarded as pioneers. Second, having a kid and rearing them was almost impossible due to the demanding nature of traveling and performing.

Some of her most well-known songs include “Don’t Stop,” “Everywhere,” “Songbird,” “You Make Loving Fun,” Over My Head,” “Hold Me,” “Little Lies,” and “Say You Love Me.” Sadly, McVie passed away on November 30, 2022, at the age of 79, but her great musical masterpieces continue to inspire.