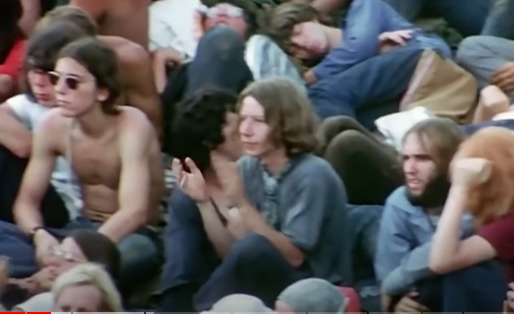 From August 15 to 18, 1969, five hundred thousand young people in New York attended the Woodstock Music and Arts Festival, considered today as the most important in the history of rock music.

We look back at the Messed Up Things That Happened In Woodstock 1969:

The attendance completely overwhelmed the organizers, who sold just under 200,000 tickets – at $18 – although it is estimated that around 500,000 people attended the festival – some sources put the figure at one million. All this caused enormous chaos, with food shortages and access to the enclosure blocked. So much so that some groups had to arrive by helicopter near the stage, where a landing zone was improvised.

Jimi Hendrix’s performance at Woodstock is one of the most memorable in its history, but it took place at 9 a.m. on Monday 18, when only less than half of the spectators were present.

The organization offered Hendrix to perform at midnight on Sunday since at that time the guitarist was the main star of the event. But his manager turned it down and insisted that the Seattle genius shut down Woodstock.

The magical moments of that long weekend, with an interpretation of the American anthem – “The star-spangled banner” – that has gone down in history and that the critic Al Aronowitz called “the best moment of the sixties. “.

There were also stories of childbirth in Woodstock, but of course, there was nothing to document it. There was talk of between one and four newborns and two women in labor evacuated by helicopter. John Sebastian announced during his concert that a boy had been born. But there is no doubt that there were many families with children at the festival.

Only in the last week did they find a caterer. No company was willing to feed 50,000 people for three days (at that time the estimate had risen to that figure). They hired someone without much experience but with the willingness to prepare hamburgers and sausages for that crowd (what they did not know was that the vendors at the end of the first night would exchange the food for drugs or give it away).

The Festival Became A Free Event

There was a notion of what would happen in the following hours before the festival. People came with their small tents, sleeping bags, or without any of that to stay all weekend. People coming in became impossible to control. They broke down the containment barriers, nobody controlled the entrances. De facto, Woodstock became a free event. They all entered.

On the starting day, Friday, August 15, 1969, the access route collapsed. The traffic stopped. At the beginning of the day, the drivers took almost 10 hours to make the final 10 kilometers. Then no one would advance. The cars were left on both sides of the road and then on the road itself. More than 40 kilometers of tail traffic. Nobody seemed to care. The audience sang and danced, driven by the music that came out of the cars, the drugs, and the spirit of the time.

Food and Water Began To Be Scarce, Drugs Was Out Of Control, and The Rain Turned The Ground To Mud

The garbage began to accumulate, so in that first morning it was necessary to wake up those who slept near the stage (a few thousand) to be able to remove it from the place, food and water began to be scarce when almost seventy percent were still missing. The festival and the indiscriminate use of drugs began to have their inevitable effects. As if all that weren’t enough, in the early hours of Saturday it started to rain and the ground turned to mud.