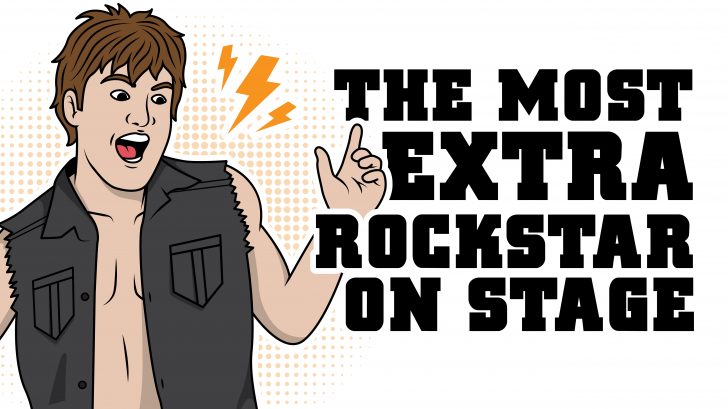 It’s never easy putting on a great show. You can sing well or play the guitar like a beast and still leave the audience unimpressed. Besides, in the rock ‘n roll world, you need to rise above the rest and one way to do that is by making sure your live performances are on another level.

Thanks to David Bowie, Freddie Mercury and other rockstars, over-the-top became the norm. And we’re living for it. This list isn’t just for frontmen and singers. As you may already know, some band members managed to steal the spotlight with their crazy extra antics.

From his trademark white jumpsuit complete with beads to his hip shaking on stage, is there anyone more extra than the King of Rock ‘n Roll?

He’s more wild than extra but for someone who wears teeny-tiny underwear on stage or who once rested his penis on an amp, he deserves a spot here.

Aside from being masters of their musical instruments, they also became famous for these antics.

Speaking of EXTRA, we can’t forget this prominent figure in pop culture – especially since the Ziggy Stardust era will always be our favorite.

From his colorful outfits to his guitar showmanship – Jimi Hendrix knew how to captivate the crowd.

He’s proof that you don’t need sparkly ensembles to steal the spotlight – the right moves will do.

How many can pull off this outfit and still look both sexy and badass?

He’s the stuff of your nightmares, enough said but extra all the same.