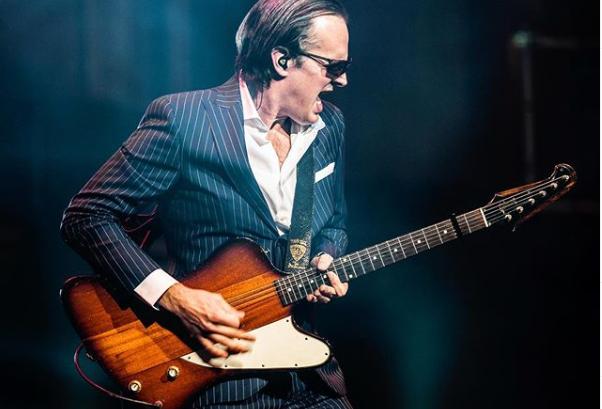 Every rock legend had their humble beginnings. These are The Origin Stories Of These 10 Guitar Legends:

Between 1955 and 1958, meeting the desires of adolescents born in the post-war period, he recorded a series of songs about girls and boys with powerful guitars and cars, launching a new reality. He was the first to understand rock as an unprecedented cultural phenomenon. On stage, Chuck Berry had a frantic way of playing, jumped with open legs and took characteristic steps that imitated a duck – and always with the guitar.

After working as a drummer in several underground bands in Detroit, White founded The White Stripes in his native Detroit with his then-wife Meg White in 1997. Their 2001 album, White Blood Cells, made them internationally famous with the single Fell In Love With A Girl. This recognition provided White with opportunities to collaborate with famous artists such as Loretta Lynn and Bob Dylan.

Page achieved some fame in the recording studios as a session musician, and in 1964, Page received an offer to replace his friend Eric Clapton in The Yardbirds, although he turned it down as a sign of loyalty to his friend. Although a year later, Clapton would leave the band by his own decision, receiving Jimmy Page again the offer to join the group. But Jimmy again rejected the offer to continue his career as a session musician, as he still did not feel ready to go on tour with a group, so he recommended his partner and friend Jeff Beck as a replacement for Clapton. Since there are not two, without three, Page would receive the offer to join the Yardbirds again, although this time it was about participating as a bassist to replace Paul Samwell-Smith, an offer that he would finally accept.
Soon after, he would end up playing the role of a solo guitarist with Jeff Beck, taking his place on bass Chris Dreja. However, the lack of musical success and internal conflicts cause Jeff Beck to leave the formation. Until in 1968, the group dissolved, and Jimmy Page founded The New Yardbirds. With Robert Plant as the vocalist, John Bonham as drummer and John Paul Jones as the bassist and keyboard player. Shortly after the band would be renamed Led Zeppelin to avoid possible legal problems with the previous group.

For Bonamassa, the instrument became an extension of himself, which soon made him a child prodigy and a true promise in the world of music. But especially in the world of blues, in need of renewal. Since hardly any new figures of international stature emerged, since the appearance of Steve Ray Vaughan. He started giving his first concerts in small blues venues as only 10 years old. Joe became a true bluesman after receiving classes from one of the leading figures in the blues; Danny Gatton. Definitively boosting his career as a guitarist at 12 years old. Playing alongside legendary figures in blues history like B.B. King, Danny Gatton, or Robert Cray. In his teens, Joe moved to California and formed the Blues Rock band Bloodline in 1991. With which he would release a single studio album in 1994. The formation dissolved after the album promotion tour.

Focusing Bonamassa after the dissolution of the group, in his role as soloist. Getting started in singing, developing his own style, and his own compositions.

Eric Clapton, known for his masterful improvisational skills. Also known by the nickname “Slowhand” (“Slow hand”), and with the “God” (“God”). In his grandparents’ house, there was a certain musical atmosphere since his grandmother was fond of playing the piano. She was the one who gave him her first guitar for his thirteenth birthday. An acoustic he had difficulty with, to which Eric would spend many hours emulating the ancient legends of blues music.

At this time Clapton would begin to frequent the Richmond area in London, and at 17 years of age, he would become part of the band The Roosters. But soon after, he would leave this group to join the Blues Rock style group, The Yardbirds, in 1963. Becoming one of the most popular guitarists on the British music scene. During his participation in The Yardbirds, Clapton earned his nickname “Slowhand”.

Guitarist and vocalist for The Black Keys, known for hits like “Lonely Boy” and “Everlasting Light.” The band’s album Brothers won three Grammy Awards. He was the captain of his high school soccer team. His love of blues began when he listened to the records that belonged to his parents. He has won numerous Grammy Awards, including the Producer of the Year Award, Non-Classical at the 2013 Grammy Awards.

Lead guitarist for The Who, the group that released hits like “My Generation.” He was inducted into the Rock and Roll Hall of Fame in 1990. He had plans to become a graphic artist before his music career took off. Her grandmother bought her first guitar in 1956. After having a spiritual awakening and becoming a disciple of Baba, he was one of the few rock stars who opposed the use of psychedelic drugs.

John Mayer is primarily known as a songwriter, singer, guitarist, and music producer. Although his career extends to live comedy, graphic design, and writing as a columnist in some magazines. Among them the Esquire magazine. John would begin to be interested in music, starting to play the clarinet, but later he would clearly opt for the electric guitar, after seeing the interpretation of the song “Johnny B. Goode” by Chuck Berry, in the movie “Back to the Future”. And when he was thirteen years old, his father got him his first guitar. Soon after, his taste for Blues would begin, after listening to the music of Steve Ray Vaughan. Starting to receive his first guitar lessons. Becoming obsessed with the instrument in such a way that his parents took him to the psychiatrist on occasion, worried about his health. Later John would declare that the continuous discussions between his parents led him to create his own world, taking refuge in the guitar.

In many ways, music was a form of a sanctuary for Hendrix, where he went to take a deep breath. Jimi was a fan of blues and rock and roll from his early boyhood, and thanks to his father’s encouragement he quickly learned the basics of playing the guitar – his father bought him the first acoustic guitar when Hendrix was 16 years old. Soon, he began music rehearsals with the band Rocking Kings, and then he made his first stage performances. In 1959, however, his attempts were reflected in Hendrix’s further musical endeavors, including a definite lack of time to drop out of high school. In mid-1966, Hendrix met Chas Chandler – bassist of the British rock group Animals – who signed a contract with Hendrix himself becoming his manager. Chandler convinced Hendrix to go to London, where he could then join forces with bassist Noel Redding and drummer Mitch Mitchell to form the Jimi Hendrix Experience.

At just eleven years old, Clark Jr. started playing guitar, giving small concerts in his teens. Later, he met Clifford Antone, owner of the local Antone’s Music Club, in Austin, who gave up his space for Clark’s presentations and, in turn, could work with personalities like Jimmie Vaughan. Later, Jimmie and other figures from the art scene in his hometown supported Gary from his beginnings to his first steps in Austin’s rock and roll scene. In 2001, being 17 years old, he received, from the then Mayor of Austin, Kirk Watson, the recognition and declaration of May 3 as the “Gary Clark Jr. Day”. For 2005, at age 21, he released his first album independently, which he titled “Tribute.” Subsequently, he released with the label Hotwire Unlimited, his second album “110” in 2008, and the EP “Worry No More” in 2010.