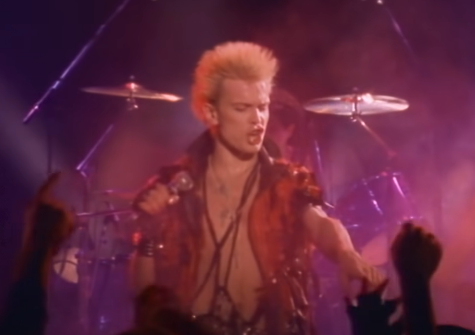 Billy Idol is an artist that caught our attention and about him was the image of a bad boy that he projected, but behind that façade, there is a great artist.

As a young man he enters the University of Sussex, but he is only there for a year, as he joins a band made up of fans of the Sex Pistols called Bromley Contingent. That experience encouraged him to create his own band in 1976, called Chelsea, that lasted a short time, but from there he already left with one thing clear, that he wants to be an artist and his stage name: Billy Idol. At the end of 1976, he created his next punk band, Generation X, a group that recorded 4 studio albums (involved in controversy and legal action against his manager during the third album), but as the group did not succeed, they decided separate and break up the formation in 1981 after the publication of their fourth and last work.

Billy Idol decides to move to New York and try to break into the musical world there and starts working with guitarist Steve Stevens (famous for his guitar solo on Michael Jackson’s Bad). With Stevens, he recorded his first solo album called Billy Idol in 1982, an album with which he moved away from punk and introduced sounds such as hard rock and the new wave sound (sound that brings together various pop/rock styles with a view to and links to the punk). It soon becomes a hit and starts to attract attention.

It would be with his second album, Rebel Yell, published in 1984, with which he finally achieved success on the sales charts and the long-awaited stardom in the United States.

Inside this album is a great song that has something special for his fans, Rebel Yell, the song that gives title to this, his second album. The theme came to Billy during an event attended by numerous celebrities from the world of music. At one point during the event, Billy observed how Mick Jagger, Keith Richards, and Ron Wood, members of the Rolling Stones, drank whiskey from a bottle where the label said “Rebel Yell”, this gave him the idea for the title of the song.

The track talks about a passionate affair with a woman who wants “more more more”, hence the chorus. Billy wrote the song together with his guitarist Steve Stevens who thought he could put some unique effects on his guitar, for this he thought that to recreate the ray gun effect he could use a digital delay processor, but later he discovered that he could recreate the sound of said ray gun more faithfully by using a toy ray gun, which he adjusted and attached to his pickups, which could generate an infinity of strange sounds. In fact, Stevens’ guitar with his original invention was baptized the Ray Gun, quite a show at Billy Idol’s live concerts.