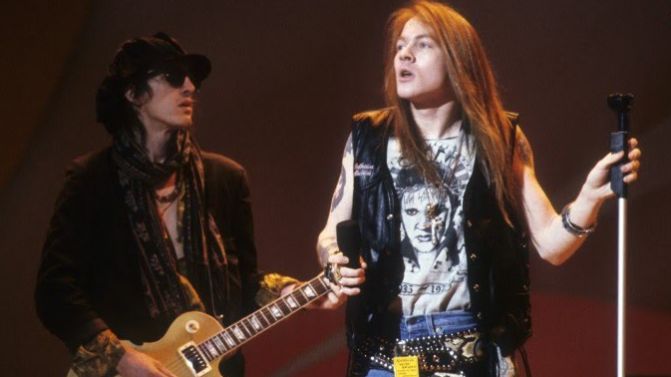 We finally got an explanation from Izzy Stradlin about his absence in Guns N’ Roses “Not In This Lifetime” reunion tour in a recent story by The Wall Street Journal.

“The current GN’R tour has been a great success for the guys,” said Stradlin in a released statement. “My nonparticipation was simply not being able to reach a happy middle ground through the negotiation process. That’s life. Sometimes things don’t work out.“

The three original members — Axl Rose, Slash, and Duff McKagan are currently having their third year of the reunion run, which is now included in the top five biggest-selling concert in music history having a gross sale of more than $475 Million.

According to Alan Niven (former GnR manager), Stradlin bailed on them as he was supposed to be appearing as a guest on their tour last year.

“[Izzy] did get as far as flying out and doing a soundcheck, and he left after a soundcheck, he didn’t want to have anything to do with it,” Niven told the Appetite For Distortion podcast. “It was last year, it was somewhere out in the midwest when they were doing stadiums. Obviously, had it gone well and everybody had been happy, and there had been a little bit of brotherhood, I’m sure he would have stayed with it. But something must have really upset him because he left after the soundcheck and never turned up for another one or an appearance. I would think right now he is probably a little-pissed off.”

Izzy Stradlin is (or should I say was) Axl Rose childhood friend and co-founded Guns N’ Roses with him in 1985. The talks about him joining the reunion tour started in the spring of 2016, telling Rolling Stone “There was just so much speculation going on regarding my involvement and studio recording. There’s so much misinformation, so I wanted to clarify that I’m not in the studio recording with any of the Guns N’ Roses guys. At this point in time, I’m not involved in the actual shows … A lot of stuff [fans] are reading isn’t true.”

And later on, Rose shared Stradlin status during an interview in the fall of 2016 with Brazillian TV, according to The Guardian.

“I don’t really know what to say about Izzy. It’s, like, you could have a conversation and think it’s one way and the next day it’s another way. And I’m not trying to take any shots at Izzy. It’s just his thing is kind of his thing, whatever that is.”

While Stradlin reply to Rose’s comment in a now-deleted tweet; “They didn’t want to split the loot equally. Simple as that.”

In 1991, Izzy Stradlin left the group which he co-founded, saying that leaving the group was the right decision.

“Once I quit drugs,” Stradlin shared. “I couldn’t help looking around and asking myself, ‘Is this all there is?’ I was just tired of it; I needed to get out … “When you’re f—ed up, you’re more likely to put up with things you wouldn’t normally put up with.”

Guns N’ Roses are currently on an extended break and will resume the tour in Berlin, Germany on June 3.