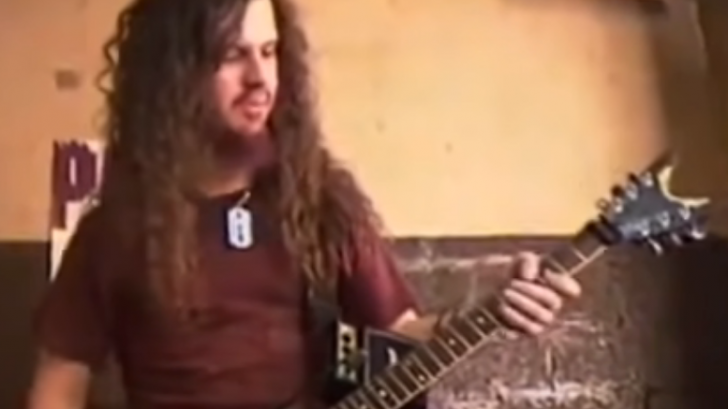 Seventeen years have passed since that fateful December 8, 2004, the day the metal world received a news that left us in shock: The tragic death of one of the best guitarists that the metal scene has had: Dimebag Darrel.

It all happened during a performance with DAMAGEPLAN, where a deranged named Nathan Gale took the stage and took the lives of Dimebag and three other people, using a gun. The murderer was killed by a policeman, however it was too late and the world was left without a great and influential musician who had seen him grow since he formed, together with his brother Vinnie, the legendary PANTERA in 1981.

During the massacre, the band’s doctor and fan, Mindy Reece, 28, came to save the ex-guitarist from Pantera. The graduate along with another of the assistants practiced cardiopulmonary resuscitation on Dimebag Darrell until medical services arrived. According to some sources, another of the victims, Nathan Bray, his life was taken from him while also trying to help the guitarist. Gale’s mother gave permission to the publisher of the book “A Vulgar Display Of Power”, a book that deals with this incident, in which there are signs of schizophrenia and paranoia in Gale, which revived the controversy about the permit of weapons in USA by the mentally unbalanced. Following the death of their brother, Vinnie Paul, in 2018, the two rest together in peace.

Darrell Lance Abbott, or simply known as Dimebag Darrell, was the guitarist and one of the main founders of one of the most iconic and beloved groove metal bands in history, Pantera. And also from Damageplan in later years.

Darrell is considered one of the best guitarists of all time, ranking No. 92 in the famous Rolling Stones magazine and in Metal Hammer magazine he was ranked No. 1, ranked by the same. magazine as the best metal guitarist. Something that many metalheads fully agree on. The importance that Darrell had within Pantera was phenomenal, being by far the quintessential member and one of the main reasons for all the success that the band had. Something like a Chuck Schuldiner, but with the difference that Darrell did not have to do all the work almost alone.

Pantera was cataloged as the creator band of the “groove metal” genre, however, in its beginnings the band played under the glam metal genre, where keyboardist Terry Glaz was the vocalist. In 1985, Phil Anselmo arrived as the definitive vocalist because the band wanted to change their sound and Terry was not going to fit in with his new style. It wasn’t until 1990 that the band made a significant change, giving birth to one of Pantera’s most recognized albums, an album that revolutionized the sound of metal, “Cowboys From Hell.”

In this album you can see a Dimebag Darrell with a much more elaborate technique to play, with emblematic riffs that were embedded in the memory of many people. Guitar solos from another world, with a virtuosity, speed and complexity that raised Darrell to the top as one of the best. Not to forget the legendary solo of the song “the sleep”. So great was this guy, that even Dave Mustaine himself offered him a position as guitarist in Megadeth, an offer that Darrell rejected since his brother would not have a place in the band, since he and his brother were practically one.

Darrell was born on August 20, 1966 in a city located in Texas called Ennis. His father was a country musician, and he had a recording studio in Pantego, where Darrell would see many blues musicians play, being one of his first inspirations to be a guitarist. But in the beginning, Darrell would not show much interest in the guitar since he liked to practice with the drums of his brother Dennis. Some time later, he would go to the guitar in the same way because his brother did not like to lend him his drums too long, you know, the typical fights between brothers.

Due to the instrument change, Darrell began practicing electric guitar full time, rehearsing continuously almost without a break. And at a very young age he had started participating in various state guitar competitions that were held in his hometown. The most incredible thing about that time, was that at 16, Darrell had been prohibited from participating in these competitions since he had won so many times that practically no other guitarist took the victory against the young Darrell. One more demonstration that since childhood was already destined to become one of the largest.

In his youth he was very influenced by the genre of glam metal, something that could be identified by the way he dressed and the way he played the guitar. With the passing of the years, he maintained this hairdressing way of dressing but with a significant change in several aspects, and one of them was the style of playing.

Dimebag Darrell was one of the most beloved guitarists in metal, due to the great charisma that he transmitted to the public in each presentation along with pantera and damageplan. The admiration for this artist is to such a degree that in most of the concerts that take place in England he is honored by the bands that visit him.

The band Disturbed also paid tribute to Darrell by creating an entire album in his memory.

On December 8, 2004, at a Damageplan concert, one of the great guitarists of all time was killed by a bullet from a madman who sneaked in during the night. The damage was fatal, without the opportunity to get to a hospital for resuscitation. Three other people died that night, it wasn’t until a self-defense guard held the killer forcibly. Apparently, Nathan Gate, had become obsessed with the band and claimed that Dimebag had stolen songs from him, which was never true because the guy suffered from serious mental problems.

The incident is remembered for being one of the most tragic events in the current history of music, a great musician like Darrell did not deserve such a horrendous ending as the one they gave him. He was still very young and he still had a whole life ahead of him to continue surprising people with his art. The saddest thing is to also think that only a couple of years before we had already lost another great music legend that was Chuck Schuldiner, who passed away in 2001 and younger than Darrell.

For his funeral, the Kiss band donated a coffin painted with the band’s design as Darrell was a huge fan of them, as well as being his inspiration to play.

Phil Anselmo was the only one who did not attend his wake or funeral, as Darrell’s parents said that Anselmo had treated their son badly when Pantera separated. An event Phil can never forget for sure.

In conclusion, Dimebag Darrell was one of those legends of music who left a great mark for those of us who love this genre. His great talent and charisma is something that will last forever in the hearts of those of us who still feel Pantera and his songs more alive than ever. We can only continue to keep alive the memory of these two brothers who were part of the history of metal, creating a genre that was the basis of many future artists.