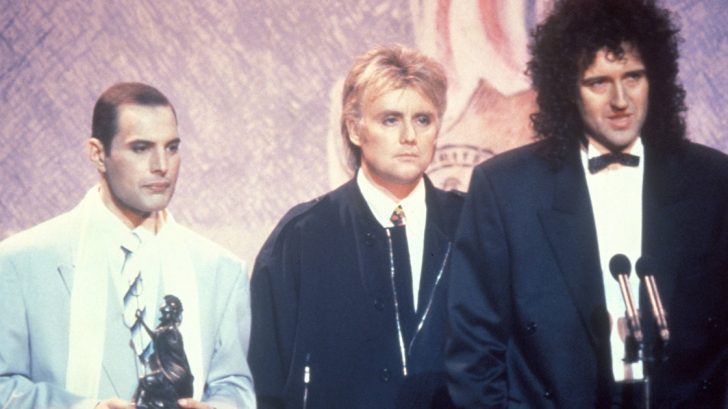 You Didn’t Know It Would Be The Last Time

Back on February 18, 1990, the 11th Brit Awards took place, and one of the best moments of the night was when the legendary band Queen were honored with a prestigious award for Outstanding Contribution to British Music – but sadly, what most people didn’t realize at the time that this would turn out to be the final public appearance of the flamboyant frontman, Freddie Mercury.

The band knew he was seriously in bad shape, but kept it privately from the public despite the rumors swirling around the British tabloids. The U.K. tabloid The Sun, particularly, were the source of the widespread rumor; as far back as the fall of 1986, their reports insisted that the singer had been diagnosed positive with HIV/AIDS. Mercury denied the reports, but – as it had with Elton John during roughly the same time period.  The Sun were still persistent and knew regardless of proof, sensationalism sold. The U.K. tabloid continued to publish Mercury rumors while hiring paparazzi to track his every movement.

As we now know, Freddie Mercury had been diagnosed with AIDS, but back then the greater public remained largely unaware of Mercury’s illness – which he reportedly received as early as the spring of 1987 — there were reasons to believe something was out of the ordinary, including the fact that the band opted not to tour in support of their 1989 album The Miracle. Brian May later explained although the decision to remain off the road was Mercury’s, not even among his bandmates knew what was going on in his health.

“We didn’t know actually what was wrong for a very long time,” said May years later. “We never talked about it and it was a sort of unwritten law that we didn’t because Freddie didn’t want to. He just told us that he wasn’t up to doing tours, and that’s as far as it went. Gradually, I suppose in the last year and a bit, it became obvious what the problem was, or at least fairly obvious. We didn’t know for sure.”

Guitarist Brian May spoke on Queen’s behalf “everyone in the industry — and, perhaps more importantly, outside the industry — who stuck behind us all these years” with giving the band “a lot of freedom to pursue what we loosely call our art to any extent we felt like at the time,” May marveled at the way they’d wandered out on “a lot of strange limbs which seemed very precarious at the time, but we didn’t quite fall off.”

With that and a joke about saying “a special thank you to the British petroleum industry for giving us this magnificent award in recognition of all the amounts of vinyl which we’ve recycled over the years,” the group left the stage.

Speculation about Mercury’s still continued following the Brit Awards, and The Sun continued prying, but Mercury maintained his privacy almost until the end of his life, avoiding any public announcements regarding his health status until Nov. 22, 1991, when he confirmed his diagnosis. After a day passed, he was gone.