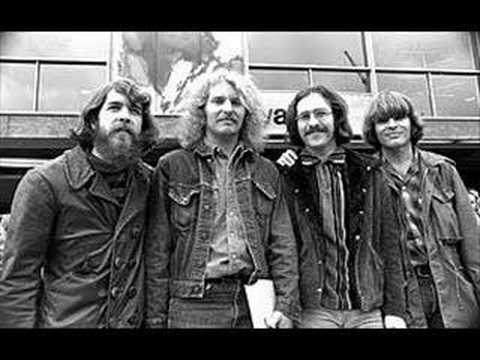 One of the most important musical groups in history. During just six years of existent they’ve enjoyed enormous success and sowed the seeds of an almost universal influence on the rock world. Their careers exploded in a meteoric way: in less than two years they went from being nobody to rubbing shoulders with the royalty of the business, but the end came with equal speed and their brief existence ended amidst bitter clashes of personalities, lawsuits, and grudges that in some case lasted until death. The Creedence

Clearwater Revival chronicle is how success can destroy a band. We will never know what they would have given of themselves had they continued a few more years, but their heritage, of course, is enough to place them at the height of the greatest. Of the seven albums they released, at least five are wonderful and it doesn’t matter how one orders them in terms of quality. Each one will have their favorites, each one will think that album X is a little better than album Y, or vice versa.

Around the time they were signing with Fantasy Records, the Blue Velvets began to undergo internal changes. The youngest of the Fogertys, John, was by far the most talented of the four, and he quickly became the main creative force. He first took over the position of a singer because his voice had more personality than that of his older brother, who was relegated to the position of rhythm guitarist. He also began to take over the composition. As a consequence, the style began to change and the fifties sound was replaced by one closer to that of the Californian hippie bands. Now it was starting to sound more like the future Creedence.

Country music has been one of the great ingredients with which Fogerty has created his tasty work, but not the only one. The simple, addictive sound that made Creedence … in the late ’60s was a fantastic mix of cowboy spirit with southern rock, rhythm & blues, and swamp pop, that heartbreaking white soul halfway between Louisiana and Texas. “When we were young that psychedelic music sounded and everyone was talking about the Grateful Dead or Jefferson Airplane. I didn’t feel like it was my place. I was into roots music … we were not so bad at what we did ”, he laughs.

They were the rebellion within the revolution. Where Jim Morrison and a whole legion triumphed with their psychotropic experimentation, intellectualism, and quotes from French poets, Fogerty, who neither drank nor smoked, locked himself in his room obsessed with the imagery of the South, which had come to him through songs from the radio. In his world lived everyday characters, who sought to get ahead or have fun. “Hank Williams was a great influence because he spoke to you about the environment with the virtue of making you believe that he was speaking to you,” he acknowledges. Its swampy and irresistible sound, full of mystical resonances, connected with the American soul. If in literature there is the concept of the Great American Novel to refer to that work that in its time captures with evocative force the myth of human narration in the United States, through which authors such as Herman Melville, Mark Twain, William Faulkner, John Steinbeck or Harper Lee, the Creedence Clearwater Revival would take pride of place in that of the Great American Song. They euphorically pointed out a path that would later be followed by Bob Dylan, The Band, Bruce Springsteen, and dozens of musicians and bands to this day.