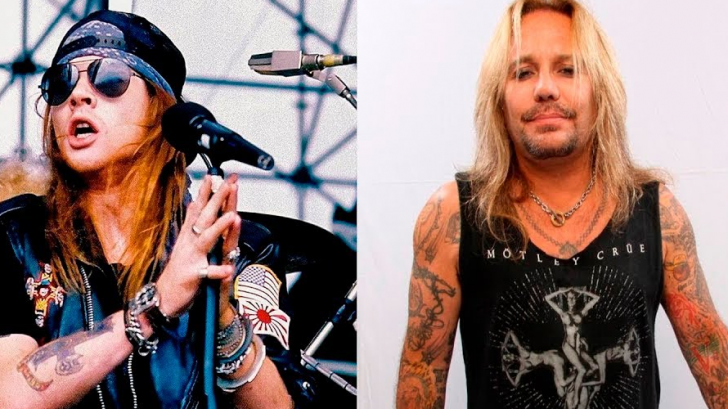 Axl Rose, the lead singer of Guns N’ Roses, has engaged in several disputes over the years. The Indiana native isn’t hesitant to get involved and express his opinions, whether it be about Kurt Cobain and Courtney Love or his former bandmates. We’ve seen him become embroiled in long feuds and see things through to the end because he’s not one to give in. He’s one of rock’s most explosive personalities.

Although his conflict with Kurt Cobain is the most well-known, Rose was already embroiled in a contentious conflict with Möley Crüe’s Vince Neil before the grunge icon. Despite the likelihood that two of the largest metal bands in the world would get along well, especially given their Los Angeles background, the reality was quite the contrary.

Mötley Crüe was founded in 1981 and immediately became one of the most well-known bands of the decade. Their 1985 album Theatre of Pain contributed to the birth of the first glam metal movement. Guns N’ Rose didn’t make a name for themselves until the legendary debut album Appetite for Destruction was released in 1987. Therefore, Vince Neil and the rest of Mötley Crüe were already well-known by the time Axl Rose arrived at the event.

Even while there were many similarities between the bands—particularly in terms of music and wild partying antics—one event in 1989 would put them directly at odds, sparking Rose and Neil’s enmity.

Strangely, Rose might have avoided the protracted rivalry because it didn’t include him at the start. It all began when Mötley Crüe gave Guns N’ Roses the Best Group and Best Metal Video awards at the 1989 MTV Music Awards ceremony for their performance of “Sweet Child O’ Mine.” After finishing their work, the band exited the Universal Amphitheatre, but Neil lingered behind to wait for Izzy Stadlin, the guitarist for Guns N’ Roses, who had allegedly slapped his wife Sharise earlier.

After Stradlin and the rest of Guns N’ Roses finished a show with Tom Petty, Neil, who was waiting backstage, got his chance and sucker-punched Stradlin. According to an allegation in Rock Celebrities, Rose yelled at Neil and threatened to murder him for the assault on Stradlin, but nothing happened.

Given their stature, this altercation garnered media attention, which exacerbated tensions. Rose then announced to Neil that he was prepared and willing to settle matters once and for all on MTV in 1990.

After delaying the task for over a year, Neil finally raised his head. He said to everyone in the room that Rose had threatened him and that he was more than willing to make amends.

In the interview, Neil said: “He said a lot of bad things about me last few years and a lot of threats. Even on one of your guys’ shows before the MTV Awards. He said, ‘Well, any time any place.’ And right now, I wanna put an end to this and what I want is, Axl if you are watching this, I want to challenge you to a fight. I’m gonna give you time and I’m gonna give you the place. There’s no backing out now buddy. It’s time to put up or shut up.”

He continued: “I’d like to do it at an arena where people can come and see. I’d like to have it televised. I want the whole world to see this fight. I think it’s gonna be great. I’m really psyched for it because I need to put an end to this. It’ll end it once and for all the bad blood between us. So let’s do it. Men should do it”.

After Neil’s controversial interview, there was a media frenzy, but strangely, nothing ever transpired. The conflict quickly vanished into history as Kurt Cobain’s ascent to fame and the arrival of grunge drastically reduced Mötley Crüe’s prominence.

It is the same with Guns N’ Roses; and although they continued to release music for a few more albums, they were never able to match the heights of their debut album because listeners were more interested in Nirvana, Pearl Jam, and Soundgarden than they were in overhyped rock epics like “November Rain.”

When the 1992 MTV Video Music Awards rolled around, Rose was focused on a new, acrimonious spat with everyone’s favorite power couple, Kurt Cobain and Courtney Love.

The issue between Rose and Neil has never been explicitly stated, but considering their relative obstinance, I wouldn’t be shocked if it hasn’t been resolved.

The notorious interviews may be seen here.