Nirvana’s ‘Nevermind’ is one of the great milestones in music history. A work that was a turning point in the music scene and is remembered for its content … But also for its iconic cover. Who does not remember that baby submerged in water that chases, amused, a dollar bill hooked on a hook?

The creator of the cover was Robert Fisher, who was the employee of the Geffen record company in charge of shaping the idea proposed by Kurt Cobain, the legendary and ill-fated leader of the band.

Everything took place in the weeks before the album was released, in 1991. Nirvana was then a band unknown to the general public, as well as Robert Fisher himself, who was a young recent graduate who had only been working at Geffen for a short time, he explained it in an interview with The Guardian:

“I was hired as a designer out of art school and I worked my way up to an art director position. I was excited when I heard that Geffen was going to sign Nirvana, so I went and asked if I could work on it. Nobody at the label had any idea it was gonna be that big. But once I got the advance cassette copy I was blown away.”

Fisher had a first meeting with the members of the band, and Kurt Cobain explained the idea he had in mind for the cover. The Aberdeen, Washington-born musician wanted the cover to feature a photo of an underwater birth in which the newborn was clearly visible.

At a time when there was no internet yet, that required doing some old-fashioned research: visiting various local libraries and bookstores to browse all the books on motherhood and newborns that included photos.

But he found that none of the images were suitable for what they had in mind, as they were too graphic or not visually compelling.

This forced us to discard the idea of ​​underwater birth and explore new options, but without neglecting the idea of ​​the submerged baby. They soon realized that the cover photo would also need some other element that would be attractive.

“We thought ‘Ok, we’ve gotta make it more than just a baby underwater’. So Kurt came up with the idea of adding a fishhook to make it more menacing. We spent the afternoon sitting around thinking of all the funny things we could put on the fishhook. One idea was a piece of meat, like a big raw steak. Another was a CD or something to kind of symbolise music.”

“We went to lunch and we were like ‘How about a burrito?’ ‘Oh there’s a dog, what about a dog?’ … it just went on for hours. I don’t remember who said dollar bill but everyone was like ‘That’s pretty good,’ and that’s what it ended up being. The thing with the whole process …

“Kurt didn’t come with like a grand plan or a message he wanted to get across. It all kind of came together organically you know, it was like one step led to another step that led to another.”’

When the group and the record company had a clear idea for the cover, they faced the following problem: how to take the photo. It was not easy to find a photographer capable of doing such a job, nothing more and nothing less than putting a baby under water to take pictures. But Fisher soon found the right person: Kirk Weddle.

“They used to have these things called work-books — big thick catalogues where photographers would buy a page or two and they’d send them out to creatives to try and get work. And this one guy in there, one of his tag-lines was he specialised in ‘submerged humans’. I thought ‘That’s our guy!’. That was Kirk Weddle.”

Despite specializing in “submerged humans,” Weddle had many doubts when Robert Fisher and those at Geffen contacted him to commission the work.

“We hired Kirk to shoot the photos at the Pasadena aquatic centre. He got four or five different parents to come down and lend us their babies and take turns passing them in front of the camera. If you look closely at the final image you can see the parent’s handprint on the baby’s chest where they were holding it right before they passed it.”

“A week later I got a couple of proof sheets back, maybe 40 or 50 shots. There was just one that was absolutely perfect. The positioning, the look on the baby’s face, the way that his arms were stretched out like he was reaching for something — everything about it was just perfect. That’s the one I picked.”

“Back before computers you used to have guys sitting in dark rooms getting paid lots of money to do what we do now in Photoshop. We had to get the photo scanned and then you would mark it up with pencil to show what you wanted done, like ‘Add a dollar bill here,’ or ‘Put some bubbles here, take out the bottom of the pool.’ Then you’d send it off, and in four or five days you’d get it back. You’d open the envelope like ‘Ohhhh!’”

“I went to the bait and tackle shop and got some fishhooks. I sent the photographer those with a couple of polaroids of how I wanted the dollar bill to look. Then I sent those photos to the colour separator and they scanned them and put them in.”

“I wanted the word Nevermind to look kind of underwater and wavy. So I had the type printed out and I held it on a Xerox machine. As it was scanning I wiggled the image and it put waves through it. Then I scanned it again and wiggled it in another direction. That’s how I got the wavy type. Now you’d just go on a computer and use filters or whatever, and people say the wavy type is kinda cheesy. But back in the day it was groundbreaking damnit!” 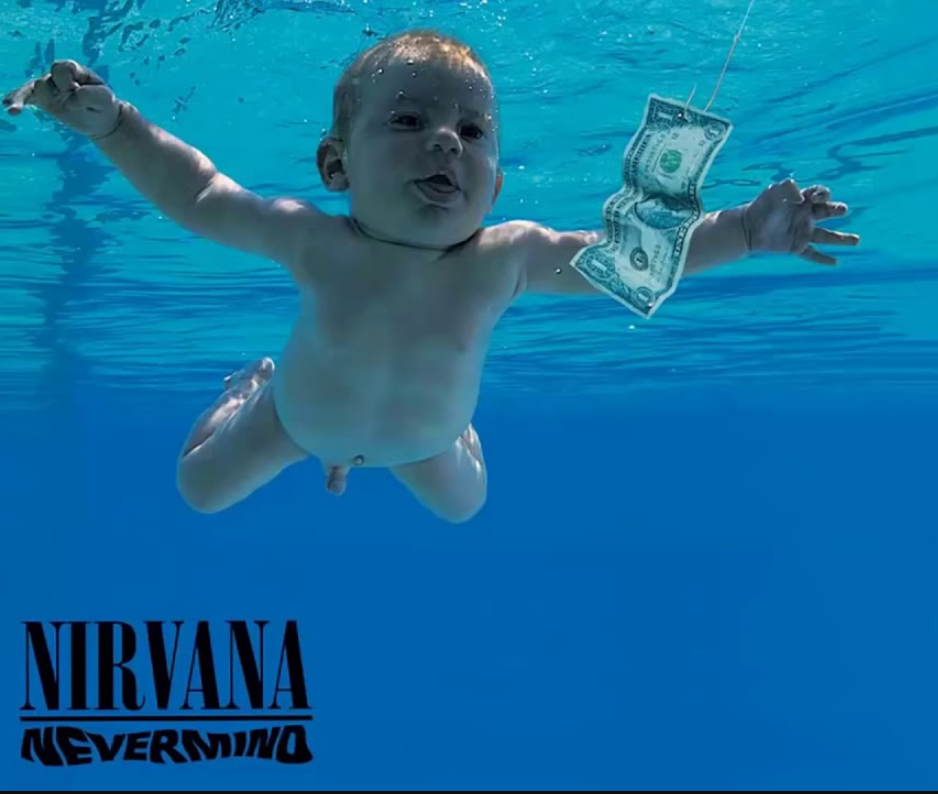 “I remember the first time I saw it with all the type on it and everything … it was perfect. I was so happy with it. When I showed the final cover for the first time to the band and management, they loved it and didn’t have a single change. Nirvana was such a great band and the two together just made magic I guess.”