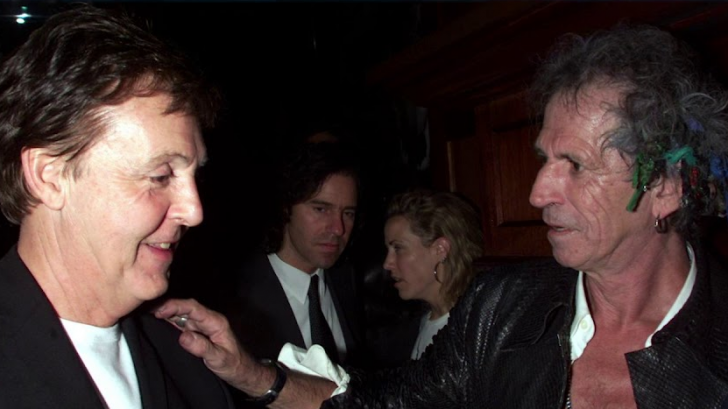 In the world of rock, there will always be two sides: those who prefer The Beatles and those who like The Rolling Stones. This excessively complicated discussion about who is better is never going to end, luckily we can hear the wonders that the two British bands created within the world of music.

But more than half a century after its emergence in Western culture, what was the first meeting between the Beatles and the Stones like?

April 14, 1963 – In the evening the Beatles traveled to Richmond-upon-Thames where they first witnessed a Rolling Stones show at the Station Hotel’s Crawdaddy Club.

It was the first meeting between both groups. The Beatles all showed up in the same outfit, long jackets with matching hats bought from Hamburg. According to Mick Jagger, it was an intimidating image that he described as “a monster with four heads.”

At the time, the Quartet was a hit in its native country with two songs placed at number one: ‘Please, Please Me’ and ‘From Me To You’.

For their part, The Rolling Stones were a fledgling band, so it took them over a year to get one of their songs to the top of the popularity charts. While Mick Jagger, Keith Richards, Brian Jones, Bill Wyman, and Charlie Watts were in the middle of their presentation at the Crawdaddy, four figures appeared in the immediate vicinity of the stage.

These silhouettes belonged to John Lennon, Paul McCartney, George Harrison, and Ringo Starr, who were in the middle of the crowd that danced to the blues beat of ‘Their Satanic Majesties’. Bassist Bill Wyman noticed his presence and made it known to Charlie Watts (drums).

After the concert was over, the members of both bands met backstage to end up in the apartment shared by Jagger, Richards, and Jones. The evening continued with the interpretation of old blues songs. It was the beginning of a friendship between the British giants.

Despite rumors about a possible rivalry, The Beatles and The Rolling Stones had a good friendship, to the extent that Harrison recommended the Decca label to sign them, which made them start in the professional world of music. To make matters worse, John Lennon and Paul McCartney wrote ‘I Wanna Be Your Man,’ which would become the first Stones song to reach the Top 10.

In this way, two of the most decisive bands within popular music met, figures that crossed borders and earned a place within the culture of the West.