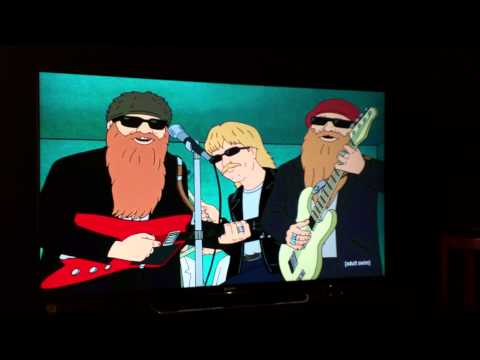 The bassist/vocalist for the band ZZ Top and Hank’s cousin. In the episode “Hank Gets Dusted”, Cotton gives his precious Cadillac to Dusty without allowing Hank a chance to buy it. Dusty enters the car in a demolition derby in which he is badly damaged. Hank and Dusty make amends after Dusty has repaired and installed the car at the Cadillac Ranch.

It was on April 1, 2007, when King of the Hill aired revealed one of their hidden secrets: The show’s main protagonist, Hank Hill, was the cousin of legendary ZZ Top bassist Dusty Hill.

Doing his own voice for the cartoon character was an easy task for him: “I played a character named Dusty Hill who plays in a rock band called ZZ Top,” Dusty humorously explains to UCR. “I kind of already had the role down, so to speak.”

Before he produced amazing television show programs, Judge’s first passion was the bass. He had been playing since high school but stopped playing after he graduated college to work for a start-up tech company. He met the ZZ Top trio when Judge was touring with Doyle Bramhall, a singer-songwriter whose main influence was Texas music.

When Judge created King of the Hill, in 1997, he explored the history of suburban Texas that he had seen during his 20s.

From its debut, the program was an instant hit, gaining a strong audience and experiencing praise from critics. But not until the 11th Season that ZZ Top made an appearance.

“A friend of mine suggested, ‘You should have it where Dusty Hill is Hank’s cousin, but he never mentions him,'” Judge recollected to Lonestar Music Magazine. “So, that was something we’d wanted to do on the show for a while.”

Hill had also considered a King of the Hill cameo before they were even invited. “Great and/or twisted minds think alike,” he explains. “I say this because long before they asked me to portray Hank’s cousin Dusty, I was a big fan of the show. I‘m from near Dallas, where the show is set, and I told my wife they should ask me to play a relative since the last name was already there. I mean, I know those characters as real people who I grew up with, including Bobby – you know: ‘That boy just ain’t right.’”

Watch the clip of the episode below: