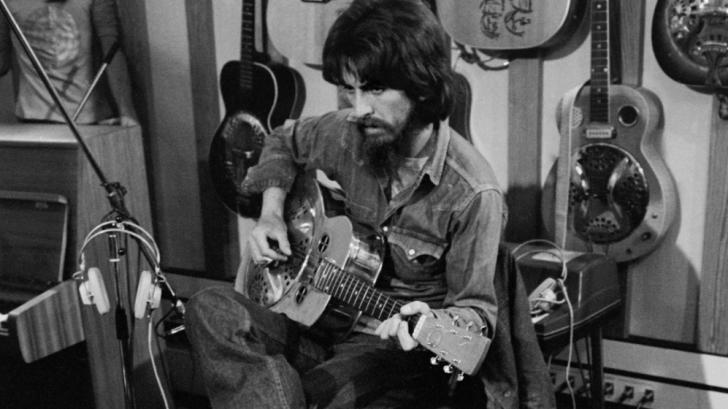 George Harrison, always in the shadow of the geniuses Lennon and McCartney, surprising to critics and audiences of the time for his ability to create masterful themes of an introspective nature where love, mysticism or spirituality fit, characteristics inherent in his humble personality.

During his time as a member of the Beatles, George Harrison was overshadowed by the Lennon / McCartney media figures. Somehow, they condemn him to remain hidden in the shadows. Sometimes his contributions are considered superficial, not to say ignored.

After the breakup of the Beatles, Harrison decides to compile his material, and accompanied by his undeniable compositional talent, he presents us with this inexcusable reference from the 70s: “All Things Must Pass”.

The entire album is surrounded by extreme exquisiteness, reflected in tracks like “It Not For You,” owned by Bob Dylan, to be followed by “Behind That Locked Door,” the catchy chorus of “Awaiting on You All,” “Let It Down,” the beautiful ballad “Run of the Mill.”

The album was critically acclaimed and turned out to be the best-selling and first released by a solo Beatle. In a manner, this album was the liberation exercise that George Harrison always wanted after the breakup of the Beatles.

“Run of the Mill” is the story of the fight between George and Paul that is in the documentary Let It Be. They fought, and the guitarist left the studio, sat down, and wrote that lyrics, putting everything out – Apple Corps. breaking, personal problems among the Beatles, and almost everything until the end.

The business side of The Fab Four started to have a bad effect on Harrison, who was coping to see the content in their Apple Corps project: “Me, I was never really interested in Apple shops or anything else,” Harrison shared Melody Maker in 1975. “During the whole Apple period, I was always mainly interested in working in the studio, recording…I couldn’t be bothered to follow through [with business ideas]. I suppose my attitude didn’t help.”

Harrison told Derek Taylor in 1979 about the composition, “It was when Apple was getting crazy…Paul was falling out with us all and going around Apple offices saying ‘You’re no good’ – everyone was just incompetent (the Spanish Inquisition sketch). It was that period – the problem of partnerships.”

“Running of the Mill” is a scarce ballad, essentially, a veiled comment on the group’s breakup, “everyone has choices…”, has an elegant production dominated by the wind instruments. Good lethargic ending for the first album of this triple L.P.