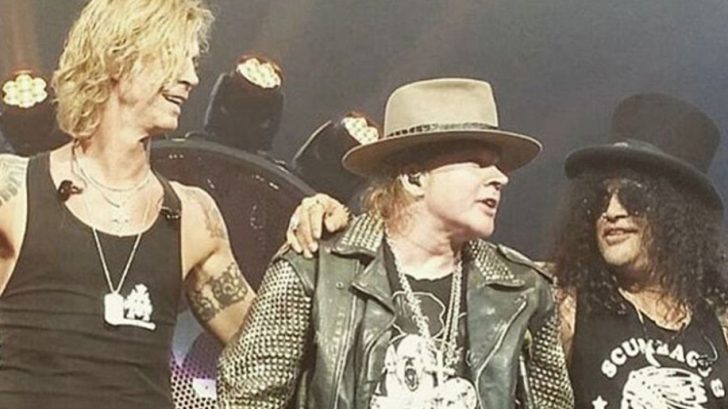 It was three years ago since it was reported that Slash and Duff McKagan would rejoin Guns N’ Roses. And it was a rock n’ roll history that fans had been waiting for a very long time, and few expected that it would have happened. The reason was the feuds between Axl Rose and his bandmates following their disbandment in the 90’s and was a lot deeper than we’ve expected and was beyond repair.

But thankfully, they were past that, and after being apart for decades, Axl, Slash, and Duff got back together, and a tour was reportedly in talks. Slash gave credit to Axl with making the first move in order to make the reunion happened. In a recent interview with USA Today regarding the new record of Slash Featuring Myles Kennedy and The Conspirators album, “Living The Dream,” he recalled reassociating with the singer (Axl Rose).

“It was nice that it happened. I don’t know if I would have had the wherewithal to call him, just because I’m introverted and it might have been hard for me,”

“Not during that initial phone call, but after that, it was really good to be able to get rid of some of the negative baggage that we’d been carrying around for a long time,” Slash continued. “It’d been 20 years of not talking and letting this bad blood continue to be perpetuated by the media. It turned into something way bigger than what was really going on, so it was good to get past that.”

Though the classic lineup was not complete, due to Izzy Stradlin refusing to rejoin the band, with Slash and Duff McKagan return has been a massive success. The “Not in This Lifetime…” tour was listed as the fourth-biggest tour of all time in January and has sold nearly half of a billion dollars in box office sales. There’s even rumor about them writing a new album.