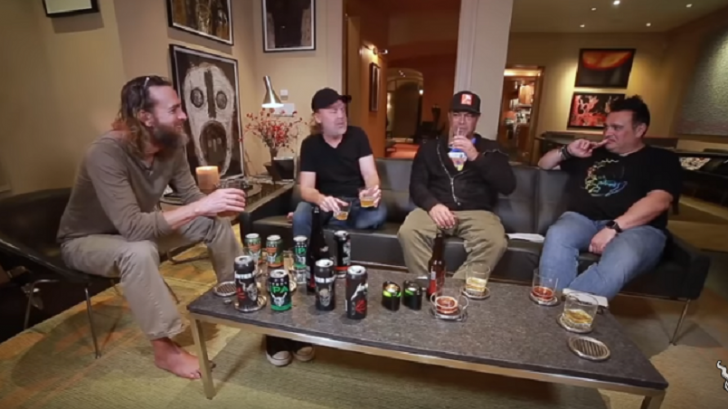 In Case You Need To Grab A Cold One…

Rock bands collaborating with other companies for products isn’t exactly new especially for Metallica. Aside from the Blackened whiskey that they launched, they also teamed up with Budweiser for a limited edition can of beer a few years back.

But this time, the band is more hands-on and they actually followed the entire process closely – that includes backstage drinking sessions of course.

Called the “Enter Night Pilsner,” Stone Brewing referred to it as “the cataclysmic collision of two uncompromising supernatural forces.” Does that sound too much? Yeah, maybe but the fact is, we still want to buy it though. Besides, it has already been released in limited quantities during some of the band’s 2018 tour dates in North America. It will be launched nationwide and this spring, it’s set for an international release.

This 10-minute documentary shows the band and the co-founders Greg Koch and Steve Wagner and how it all came about.

“The amount of ideals and outlooks that Metallica and Stone Brewing share are endless. I’m always blown away about how similar our paths forward have been.

“Our view of the worlds that we each inhabit, of creativity and process, and sense of place in relation to our peers and ‘The Man’ are almost identical. This collaboration is beyond effortless and pure, and we can’t wait to share this incredible beverage with everyone out there.” – Lars Ulrich

From the flavor to the aroma, beer drinkers would surely appreciate this drink especially since Stone Brewing is well-known for going beyond the usual “fizzy yellow beer.” Koch also had this to say,

“I remember seeing METALLICA on the cover of a magazine just after the Black Album was released. On the cover was a quote that resonated with me to this day: ‘METALLICA didn’t go to number one, number one came to them.’ I loved what that meant. Do it your way and never compromise your art. If you’re great at what you do, people will come. I view that simple quote as one of the founding philosophical elements of Stone Brewing.”

BRB as we go find the store nearest to us.