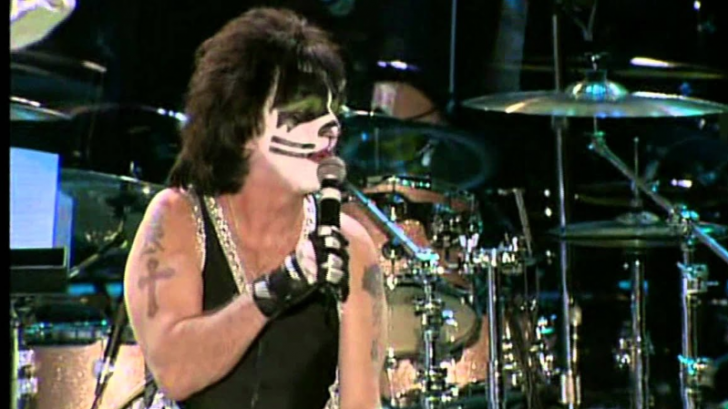 On May 18, 1980, Kiss issued a statement announcing that drummer Peter Criss was no longer in the group. The announcement arrived as a shock to fans who’d followed the very lineup since its formation in 1973 – although it was more of a relief to the two remaining members, and also Criss himself.

The group’s situation was already out of control for them due to the drummer’s alcohol and drug abuse reaching to a point where he was not reliable anymore. Criss even admitted that he sabotaged his last show in 1979. KISS gave up to do some recording with him and instead hired a session man Anton Fig for the album, Unmasked. Paul Stanley and Gene Simmons agreed to let him go, but Ace Frehley wanted for him to stay – and so manager Bill Aucoin planned for an audition at SIR studios in New York.

“The day of the audition or rehearsal or whatever you wanted to call it, Peter walked in carrying a music stand and sheet music,” Stanley wrote in his autobiography Face the Music: A Life Exposed. “The first thing he said was, ‘I’ll have to have all your songs on sheet music because I read music now.’ I whispered to Gene, ‘Are we on Candid Camera?’” The frontman continued: “Peter sat down, put his sheet music on the stand, and studied it for a while. Mind you, this rehearsal was of old material, not the new stuff we had written and recorded for Unmasked. We wanted to see whether he could even play the songs he already knew.”

In his book Kiss and Make-Up, Simmons remembered that Criss “looked very serious and intense,” adding: “Peter couldn’t read or write music, not then and not now. None of us could. … But by that time he was so delusional that he thought if he had a music stand, he could convince us that he head changed. I’m surprised he didn’t bring a baton.” The situation didn’t improve once the playing started. “[H]e was worse than ever,” the bassist recalled. “So we had a meeting afterward, and we said, ‘Peter is unhealthy. He’s going to kill himself. He’s got to leave the band and get some help.’”

Criss revealed that his addiction problems had left him in a mess. In his book, Makeup to Breakup: My Life In and Out of Kiss, he wrote: “With each sip and each snort, I felt my world collapsing around me. Then I just started crying again.” He wanted out of Kiss – but Frehley felt differently and pushed for the audition, even though the drummer had told him: “Ace, I don’t want to play with the band no more,’ I said. ‘I’m going to get my own band. You should do the same, you’re miserable.”

Criss revealed that he’d sabotaged the rehearsal session to make sure he didn’t have to rejoin. “I really wanted to get back at them for all the times that they’d put me and my music down,” he explained. “I was going to play this out to the max. Instead of the fun-loving, clothes-shedding Catman, they were going to see a new, improved, serious Peter Criss. … I had never been so serious in my whole life, and it really freaked them out. I was extremely locked into myself from the blow. They didn’t know what to make of me.”

Criss verified that, although he’d been practicing with jazz drummer Jim Chapin, he couldn’t read music “that well yet.” He did produce a few extra licks that he’d learned, however. “Can’t you follow me, you assholes?” he remembered asking, adding: “I’m surprised that they played with me as long as they did… but they stayed there for an hour or so, until they were finally fed up and left. At the time I felt like I was throwing my life out the window, but who’s kidding who? It really had been over for a long time already.”

His last assignment as a Kiss member was the video shoot for “Shandi,” an event he remembered as hurtful even though he’d caused it to himself. His departure was declared official later. “To the press we used the traditional rock-band excuses: creative differences, desire to begin a solo career, and so on,” Simmons said. “We never said that Peter was thrown out of the band because he was a drug addict. We wouldn’t have done that to him, to the fans or to ourselves.”