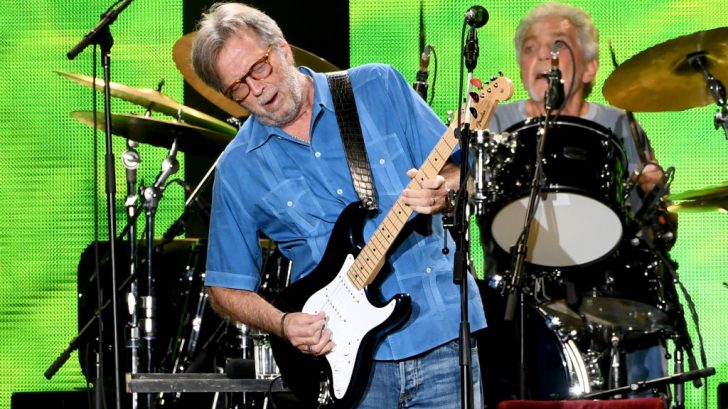 Everyone has a song that really resonates with them. Every time we hear the song or think about the words, it transports us to another world and distances us from the one we are currently on. A tear may form when the song starts because of a loved one’s passing, grief, or nostalgia. In truth, Eric Clapton wrote a number of these depressing songs for his long-lost father and after the passing of his son Conor, including “My Father’s Eyes” and “Tears In Heaven.”

Throughout his life, Eric Clapton had to cope with challenging situations, including the terrible death of his 3-year-old son Conor and not discovering his father’s identity until 2007. Clapton utilized music to deal with his traumas, and his songs ended up being depressing reminders of them. Other than this, the musician’s romantic luck wasn’t all that good. His many romances have been in the news, particularly his affair with Pattie Boyd, the wife of George Harrison. Eric worked so hard to win Pattie’s heart, but in the end, cheated on her repeatedly and verbally abused her.

Eric Clapton’s primary drug addiction was the reason he kept changing relationships. He became addicted to heroin when he was in love with Pattie. While residing with Pattie Boyd, Clapton quit taking heroin, but this time he started drinking. His romantic relationships and musical career suffered greatly as a result. Eric Clapton married Melia McEnery after having romances with Pattie Boyd, singer Betty Davis, manager Yvonne Kelly, and model Lory Del Santo.

Eric Clapton has benefited greatly from Melia McEnery’s assistance during his struggle with drug and alcohol addiction. The pair has three children and has been together since the early 2000s. McEnery made an effort to promote Clapton’s musical career and stick by him over the years.

Clapton established the Crossroads Centre in Antigua after deciding that he needed to overcome his drinking and drug addiction. Since 1999, he has been running the annual Crossroads Guitar Festival to raise money for the treatment facility. His wife, Melia McEnery, wanted to get involved and is a board member of the institution.

Eric Clapton’s music is a favorite of McEnery’s as well. ‘Run Home To Me,’ a track from Clapton’s 2005 album “Back Home,” turns out to be her favorite Clapton song. According to what Eric Clapton told YourTango, they both weep when listening to this song since he composed it after feeling like they were becoming a family.

“She only has to hear the opening, and she starts to cry,” said Eric Clapton about ‘Run Home To Me.’ “And me too, because that song is about us sitting on the stony beach in Bognor in winter. It was cold but beautiful, and nobody was there, and it was the most real picture I had of us becoming a family.”

Thus, after spending a chilly winter day on the beach with his wife Melia, Eric Clapton composed “Run Home To Me.” The two apparently found being there by themselves to be a lovely experience, and Clapton reportedly felt like he finally had a family as a result. It’s hardly surprising that this emotion causes them to cry given how hard the artist searched for his soul mate.