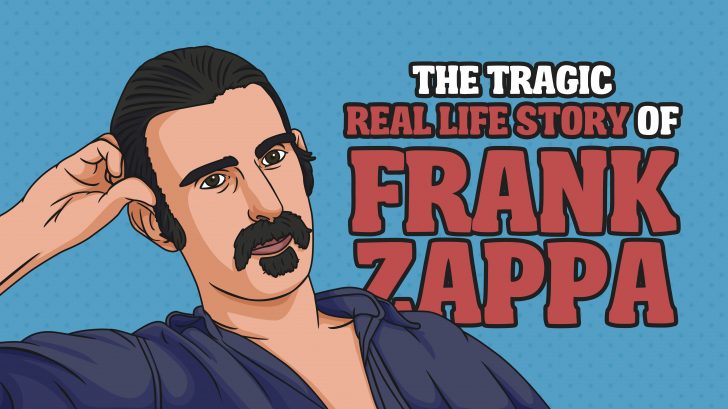 Frank Zappa was a unique legend and an icon in the entertainment industry. He had a very eventful 30-year music career that included every musical genre from rock, to jazz, synth, and classical music. His music and creativity were well-influenced by avant-garde composers and even the math and chemistry from his father’s work. In his career, he made more than 60 albums with music that was often shocking and highly political on purpose.

Jack Of Many Trades Besides Music

Aside from being an accomplished musician, Zappa also directed films and designed his own album covers. He is a true artist in every form, brillant in an unconventional aspect. He is considered and respected as a musical pioneer. However, despite all these praises and compliments, not many may know that he actually lived a life of tragedy until his death on December 4, 1993, at age 52.

He Suffered But Still Did His Thing

In 1990, Zappa was diagnosed with prostate cancer which made him incapable of urinating. The cancer was inoperable and untreatable as it was detected too late. During the time of his deterioration, he still continued to create music and devoted his final days to composing classical music. In 1993 he released an orchestral album titled The Yellow Shark to positive reception. Unfortunately, it was only a few weeks after the album release that Zappa passed away.

His life was filled with illness, much turmoil, and dysfunctional relationships. His childhood was filled with literal poisons and toxins as his father Francis worked at a military facility that manufactured poisonous gas during World War II. His father would usually hand him lab equipment, including beakers, flasks, and petri dishes full of mercury. Zappa told the Washington Post later on that his “only toy” growing up was a gas mask and he opened it with a can opener.

Exposure to hazardous substances as a child impacted his health. According to Zappa, he “lived in mercury” and recalled how he used to pour it on his bedroom floor and splatter it with a hammer for fun.

His family would often move from one state to another because his father worked for the Department of Defense, and that didn’t help at all to provide young Zappa with a stable home life.  Zappa attended six different high schools by the time he was 15, according to the NY Times.

Still, even from a young age, Zappa was already fascinated with chemistry (from his father) and classical music. He didn’t write rock music til he was 21 but he was already composing classical music at 16 years old. He liked to blow things up and would try to make his own fireworks as a kid. He even got almost expelled for starting fires all over his San Diego high school with a mixture that contained rocket fuel.

He was a self-taught musician, which just proves how much of a genius he truly was. He even conducted his school’s orchestra when he was in high school.

He married his college sweetheard Kay Sherman when they dropped out of school to elope. However, his wife eventually divorced him when he had an affair with “a buxom redhead named Lorraine Belcher”, according to the book titled Tropic of Capricorn.

Zappa absolutely detested cops ever since he got arrested. He had described his arrest as one of the worst experienced of his life, and he spent 10 days behind bars. The whole experience left him jaded and “ready to flip the bird at the rest of the world.”