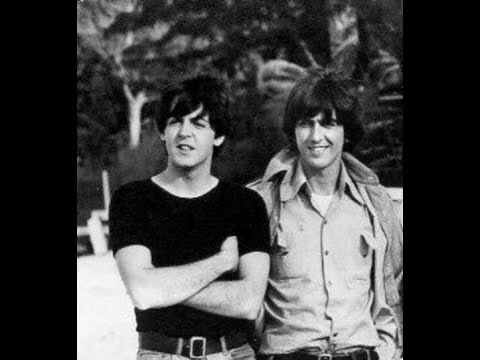 Paul McCartney’s songwriting skills and George Harrison’s skills on the guitar made for several hits for The Beatles. McCartney and John Lennon took most of the credit for the band’s songs – they had a songwriting association with around 180 jointly credited songs. However, it was Harrison who helped the band discover a new voice with some songs of their own.

There is always plenty of talk about Lennon and McCartney, as the two were often seen leading the band during tours and media appearances. But what remains more hidden is the McCartney-Harrison friendship that flourished during the band’s early days.

So how exactly did McCartney and Harrison become friends, and how did their friendship evolve as the band rose to fame? What impressions did they leave on the band? These are some of the questions that the Beatles and classic rock fans might be eager to explore, and we have the answers below.

Paul McCartney and George Harrison’s friendship began before The Beatles

The bond between the Fab Four seemed strong when they first appeared together in the early 1960s. Chemistry and synchronicity came with years of collaboration and obsession with music. George Harrison was obsessed with guitars from a very young age. According to Rolling Stone, Harrison filled his notebooks with guitar drawings and then charts of chords and lyrics as he practiced his way to find a place in a band that would go on to make album after album.

Paul McCartney was Harrison’s older classmate, and they met when McCartney needed a guitarist for a new band he was trying to form with John Lennon. “I know this guy,” McCartney told Lennon, according to Rolling Stone.

Performance was all it took Harrison to make his mark in front of the Liverpool boys. He was accepted and became a Quarryman: the band was called ‘The Quarrymen’ in its early stages and then it became The Beatles. Ringo Starr joined the band in 1962 after the band fired Pete Best.

George Harrison once grew tired of Paul McCartney, but their friendship endures even after Harrison’s death.

George Harrison struggled to include his compositions on the band’s album. But when the band decided to split up in 1970, Harrison was able to express his feelings on his album “All Things Must Pass.”

“George got stuck with being the Beatle that had to fight to get songs on records because of Lennon and McCartney. Well, who wouldn’t get stuck?” Bob Dylan told Rolling Stone, according to NME. “If George had had his own group and was writing his own songs back then, he’d have been probably just as big as anybody.”

The magazine recounts how Harrison told The Beatles editor in 1979 that he was getting tired of McCartney, prompting him to work on “Run of the Mill,” a song directed at McCartney.

Both Harrison and McCartney worked alone and with other groups after the band’s disbandment. Their relationship also aged, overseeing the frictions of their youth. The surviving members of The Beatles at the time, Harrison, Ringo Starr, and McCartney, even met briefly at Harrison’s home in 1994 to perform some of the band’s early songs. The friendship now seeps into an evergreen coniferous tree that Harrison gave McCartney before his death in 2001.

“It’s lovely. He gave it to me, so I just planted it,” McCartney told NPR, according to Insider. “But then, as the years go by, every time I look at it I go, ‘That’s the tree George gave me.’ George has sort of entered that tree for me. I hope he’s happy with that.”