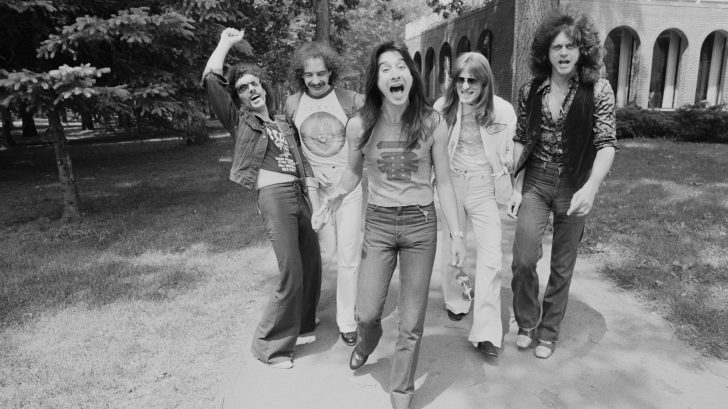 It’s About A “Man’s Best Friend”

Before he became Journey’s keyboardist and songwriter, Jonathan Cain had just moved to Hollywood, CA from his hometown of Chicago, IL. Cain experienced his first punch of bad luck and decided to phone his dad for some funds. The phone call was incited after Cain’s dog was hit by a car and he couldn’t come up with the money to pay the $900.00 vet bill. “Dad, should I just give up on this thing and come home?” Cain asked his dad.

His father responds, “No no, don’t come home. Stick to your guns. Don’t stop believin.” He did ultimately get the loan from his dad but something more valuable was gained. During that fateful phone conversation, Cain was scribbling notes in a spiral notebook. One of those scribbles was “Don’t Stop Believin.” Cain left his then current band, The Babys, and went on to San Francisco to work with Journey in 1980. Dad’s prolific advice still remained a prominent piece of morale that stuck with Cain during the most important part of his dawning career.

And Then It All Made Sense And Came Together

When Jonathan Cain joined Journey in San Francisco, the composition for their album Escape began. Singer Steve Perry turned to Cain for a last track. Feeling like he was under intense scrutiny, Cain goes home to sit on his Wurlitzer piano and look for ideas in his spiral notebook. He flips through the pages and finds the scribbles from his phone conversation with his dad.The legendary song writer finds “Don’t Stop Believin” and presents the idea along with some chords to the band.

“Perry said, ‘Man, those chords are great.’ … He just had an engineer’s (mindset),” says Cain about the moment he showed Perry the “Don’t Stop Believin” notes. The band recorded Perry’s improvised lyrics with some instrumentals, and Cain took the recorded track back to his apartment. He tuned it up a bit and returned to the studio. The rest of the song was constructed around the theme of Sunset Boulevard on a Friday night. Listen to the iconic song now, and you’ll totally feel that vibe. After finalizing the song, “Don’t Stop Believin”  became the first track on Escape and went on to make rock and roll history around the world.