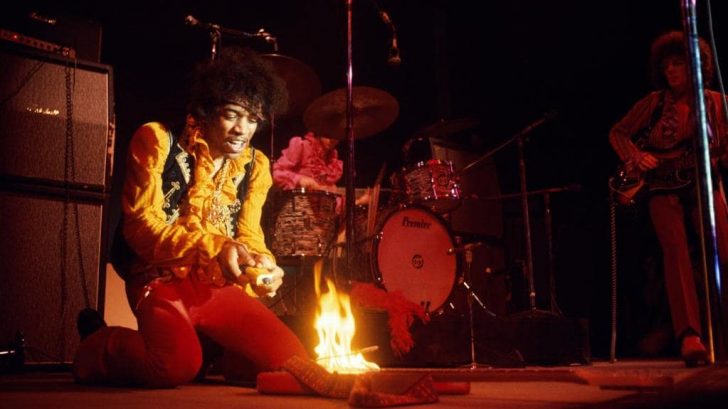 via The Daily Telegraph

There are some instruments that helped build the foundation of rock ‘n roll – one of them is Jimi Hendrix’s 1965 Fender Stratocaster which he infamously burned during a performance. It had so much value that it sold for over $350,000 at an auction.

Although there are rumors that Hendrix actually switched to a cheaper axe during the burning, the question remains – why the heck did he do it?

Back in the ’60s, you needed to step up your game if you want to rise above the rest. Pete Townshend was known for destroying his guitar after every gig and so of course, Hendrix had to follow suit because apparently, his mad axeslinging skills weren’t enough.

Before the Monterey Pop Festival, Hendrix already pulled of and somehow mastered his stunt. It started in early 1967 when they embarked on their European tour and he accidentally cracked his guitar. Since it was already damaged, he decided to smash it altogether. In March that same year, Hendrix was part of a British tour. And since he was in the company of other iconic musicians like Cat Stevens, he and Chas Chandler brainstormed ideas on how he can take their new song “Fire” to a whole new level during the performance.

Before the first show on March 31, they hung out with rock journalist Keith Altham at the Finsbury Park Astoria. Altham came up with the idea initially.

“I was backstage at Finsbury Park Astoria and [The Jimi Hendrix Experience] were on that package tour Englebert Humperdink and Cat Stevens and a whole bunch of people who were ill suited. Chas [Chandler, Hendrix’s manager] turned to me at one point and said ‘how are we going to steal the headlines this week?’ So I said ‘you can’t keep smashing the guitar because people will just say you’re copying The Who and The Move, you got to find something original to do – why don’t you set fire to the guitar?’

“There was a silence in the dressing room for about 10 seconds and Chas turned to Tony Garland, who was his PA at the time, and said ‘Tony, go out and buy some lighter fuel’. That is how ‘guitar flame’ was born. Jimi set fire to it on stage, after a few aborted efforts he whirled it around his head like an Olympic torch, much to the disconcertion of the fire chief who would probably never work again on the circuit.” – Keith Altham

And so during the performance of “Fire,” Hendrix put down his axe by the amplifiers and Chandler doused it in lighter fluid. Both Noel Redding and Mitch Mitchell continued to play on. Hendrix then grabbed the guitar, laid it on the floor, knelt beside it and tried lighting it. After a few attempts, it lit up. And because there was so much fuel thanks to Chandler, flames rose to over a meter in height and therefore burned Hendrix’s hands. The emcee who rushed to the stage also had minor burns.

Hendrix probably felt high from the adrenaline because he was still able to get another guitar and play on it. Later that day, he was brought to the hospital for treatment.

A few months later, he once again pulled off the same stunt at the Monterey International Pop Music Festival. And Hendrix’s guitar-burning showmanship became as iconic as the man himself.