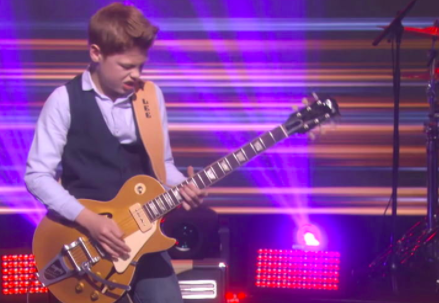 This kid’s got the blues!

The young teenager who hails from Oxfordshire, England took the stage as Ellen’s musical guest whipped out Stevie Wonder’s classic hit “Superstition” on his electric guitar which has a quirky design on it: a print of his name. Toby’s talent even goes beyond his amazing string work, with his fancy guitar acrobatics, playing it over his shoulder. He obviously delighted and amazed his audience, as well as Ellen herself, and gained a well-deserved standing ovation after his performance.

Toby sat down with Ellen and shared his passion for blues music with humor. When Ellen commented that it was unusual for a kid his age to get into blues, Toby joked saying,

Toby also shared his love for vintage cars and told the story that he used his earning from appearing in the stage musical School of Rock to buy himself a 1965 Volkswagen bus, and he’s not even old enough to drive yet!

Surely, this young man is an old soul.

Check out his performance and interview in the clip below: