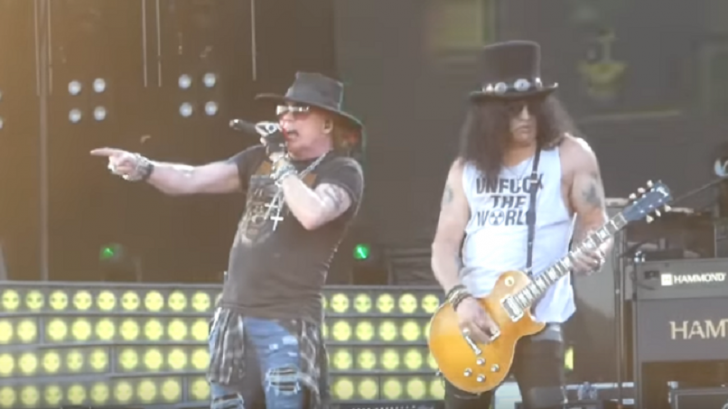 Remember back in 2016 when the entire rock ‘n roll universe was shaken to its core because Brian Johnson left AC/DC due to his hearing problems? And the band hired Axl Rose as temporary replacement? Yeah, that was a crazy time.

Almost everyone was highly doubtful Axl could pull off the gig and some fans even had their tickets refunded because they didn’t want Axl Rose singing AC/DC classics. Few people were excited to see if he could nail it but most were actually just waiting to be disappointed.

And as it turns out, even long-time bandmate Slash shared everyone’s skepticism. In an interview with the Los Angeles Times, he said:

“The Axl-doing-AC/DC thing, I went and checked that out, and it was awesome. I was probably as skeptical as anybody because of the iconic status of the band, and he pulled it off and it was great.”

Slash designed a new @epiphone Ltd. Ed. Firebird and signed all 100 of them. Check them out and pick up one at an Epiphone dealer near you! #slashnews

“I’m probably a little bit more intimidated about the idea of having to fill someone’s shoes — someone that I look up to or had a big influence on me. If I was going to get that phone call, I’d want to do it in a band that no one would expect me to be in.”

Axl Rose had big shoes to fill but even the harshest critics had to admit he did a fine job as AC/DC’s frontman. He nailed the high notes and his live performances were nothing short of spectacular. He didn’t just silence the haters, he also gave them several reasons to admire and respect him. After all, he now had two frontmen gigs under his belt and both from legendary rock ‘n roll bands.

As for Slash’s future plans, there might be hope for another Guns ‘n Roses record as he reveals:

“Next year is all touring [with The Conspirators], but going beyond that, obviously I’m not going to not mention wanting to do a Guns record along the way. It’s not a personal challenge or anything, but I would love to see a Guns record get done and have it be, to us, really great. That would be awesome.”

That’s something to look forward to!