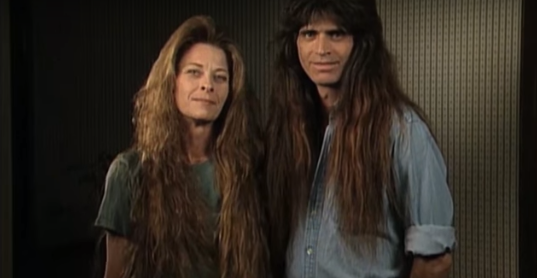 Fell In Love All Over Again

In the year of 2002, a metalhead couple lets go of their metal look. They hadn’t changed their fashion sense for over a decade. They’ve been married for 12 years during that year. The husband is a member of a struggling rock band as a bass guitarist. For 17 years, he never had any haircut while his wife had been growing her hair for 11 years. The couple looked like as if they were walking off the set of a Heavy Metal music video.

Tim and Wendy White are a sweet metalhead couple which both have a long history together. They’ve been calling themselves “the rock ‘n’ roll hair couple.” They seem to be liking their looks pretty much but Wendy noticed that her very long hair was kind of aging her.

So, with the help of the show, the couple each went in for a transformation. A team of beauty experts had given them a makeover that will transform them into different looks. – YOUNGER looks. Wendy received a bouncy short blonde haircut and Tim got his first haircut for over a decade. On the Oprah Show, Wendy the first to come out behind the curtains, reveals her fresh transformation.

“I feel young and sexy!” she said.

Next was Tim, walking out behind the curtains. Showing off a much younger look and shorter hair while wearing a black Prada suit. Proudly doing a spin move like a model and a quick air guitar for appearances. As he stopped in his tracks, he laid eyes on his wife. He was pretty shocked and went straight to her wrapping themselves in a tight embrace. It was the best reaction ever. Such a lovely couple these two.