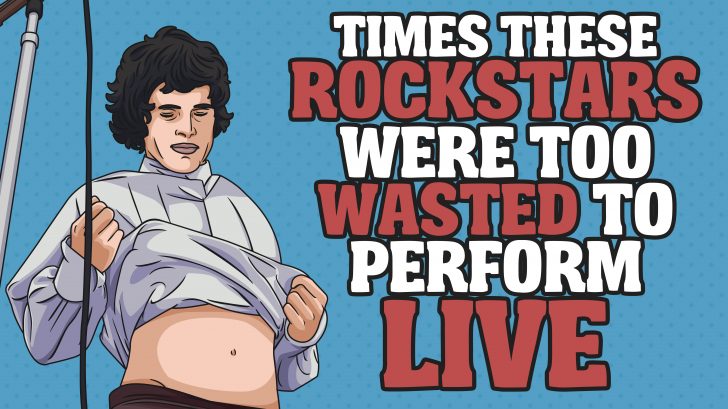 They Were Dazed and Confused

These aren’t their finest moments, that’s for sure. Some actually perform well even when they’re smashed or wasted. But the following rock acts barely pulled off a decent performance. So you see, the next time you feel embarrassed about your drunken antics the other night, at least few people witnessed it. Imagine if throngs of fans witnessed all your crazy shenanigans and told their families and friends about it.

What’s even worse is they actually paid to see you. That just sucks big time. Looking back, these artists either have regrets or just laughed it out. Either way, it sure made for some memorable times.

During The Doors’ show in New Orleans in 1970, Jim Morrison was apparently so loaded he was having a hard time standing up so he had to rely on a mic stand for support. He made terrible jokes, was slurring while talking, forgot the lyrics to his songs and he kept staggering on stage. And he looked so unkempt some people from the audience didn’t even recognize him until he started talking. And finally, he grabbed the mic stand and smashed it repeatedly. He then threw the mic down before storming out.

We want to remember David Lee Roth as someone with seemingly limitless energy as he karate kicks his way on stage. But like any other rocker who had too much to drink, his antics are pretty embarrassing. When Van Halen showed up for the 1983 U.S. Festival, they were exhausted from touring for three months. They couldn’t turn down the offer to headline Heavy Metal Day because well, they’d be paid $1.5million for that.

According to Apple Computers co-founder Steve Wozniak who also co-founded the event, Diamond Dave was “practically falling down onstage. He was so drunk, slurring and forgetting lyrics and everything.” Even MTV VJ Mark Goodman claimed that David was “laughing at every joke he made.” And to top it all off, he talked crap about The Clash as if they weren’t present in the same festival. Lucky for him, they still got paid.

Even EVH had some mortifying drunken moments too. Remember back in 2004 when they embarked on a reunion tour with Sammy Hagar? Almost everyone knew it was bound to be a disaster. At the time, Hagar said Eddie was already drinking wine straight from the bottle. And so for their final stop in Tucson, all hell broke loose because not only did Eddie play so bad, he also smashed his guitar to pieces sending some shrapnel into the audience. He ended up tearfully yelling “You don’t understand!” to them.

You know what’s worse than getting fired? It’s having thousands of people witness the moment you screwed up and afterwards, getting beaten by your “boss.” Most likely from having too much cocaine in his system, guitarist CC DeVille played “Talk Dirty To Me” instead of “Unskinny Bop” during the 1991 MTV VMAs. Not only did he play poorly, he looked somewhat confused too. Backstage, he and Bret Michaels got into a fistfight before he was dismissed.

In a nutshell, Scott Stapp disappointed his fans so much that they filed a class action lawsuit for Creed’s 2003 show in Chicago. They asked for ticket reimbursement, parking fees and $2 million. According to the documents, the audience members claimed that Scott was “so intoxicated and/or medicated that he was unable to sing the lyrics of a single Creed song.” They also added that “Stapp left the stage on several occasions during songs for long periods of time, rolled around on the floor of the stage in apparent pain or distress, and appeared to pass out while on stage during the performance.”

We can’t talk about rockers who were too wasted to perform without mentioning this Keith Moon incident which every single The Who fan probably knows by heart. Keith Moon is notorious for many things including taking drugs and alcohol even other rockstars deem as excessive. So for their 1973 Quadrophenia tour at the Cow Palace in San Francisco, he took horse tranquilizers to steady his nerves. He also took a shot of brandy after.

While playing “Won’t Get Fooled Again,” he started slowing down and eventually passed out at his kit. Some said he was injected with cortisone while others claimed he was thrown into a cold shower. But whatever they did, he went back around 30 minutes later to the stage for “Magic Bus” but he collapsed again and The Who were forced to perform “See Me, Feel Me” without a drummer. But suddenly, Pete Townshend had an idea and asked someone from the crowd to play the drums. 19 year old fan Scott Halpin took over the drumming duties for their next three songs.

Grace Slick once said in an interview, “You make a lot of decisions when you’re drunk and they’re majorly stupid.” And she speaks from experience because during Starship’s tour in Europe back in 1978, they made a stop in Germany. One show was already canceled since she was too sick to perform. But in Hamburg, she was binging on alcohol like it was nothing and so when the band got on stage, she repeatedly asked the crowd “Who won the war?” And she even did the ‘Heil Hitler’ salute. And to make it worse, she called them Nazis. She left the band afterwards.