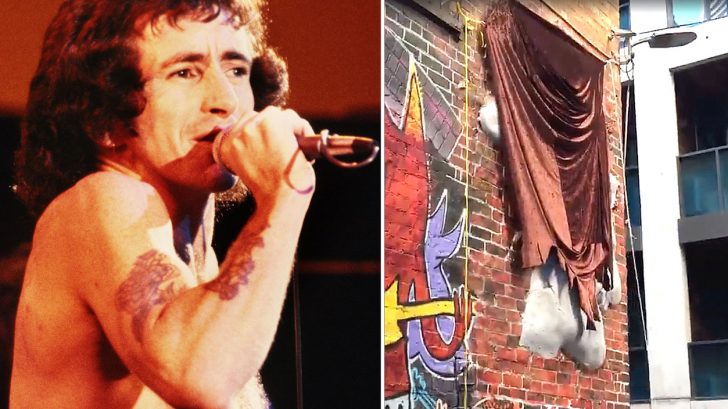 The late former frontman of Australia’s greatest rock n’roll band AC/DC is honored with a sculpture carved to his likeness that can be seen in an alleyway in Melbourne alleyway fittingly named AC/DC Lane.

This sculpture is created by Melbourne-based artist Mike Makatron who is a regular mural artist in AC/DC lane. Makatron sculpted the AC/DC singer in a 3D concrete statue bursting from brickwork, attracting hundreds of sightseers day in day out.

The unveiling ceremony was attended by Scott’s son Dan Stevens who also was given the honor of presenting the sculpture to the public for the first time.

Makatron said of his work,

“It’s an honor to add a permanent 3D element that pays tribute to a great Australian rock ‘n’ roll band and its lead singer, Bon Scott, but also to music in general”

This Bon Scott sculpture isn’t the first public landmark to be inspired by the AC/DC singer. There is a Bon Scott statue in Perth, Australia that fans and tourists visit. There is also one in his home town of Kirriemuir, Angus, Scotland , where it serves as the centerpiece of a memorial garden.

Check out the video from the new sculpture’s unveiling below:

Let there be Bon. The unveiling of the Bon Scott statue in AC/DC Lane