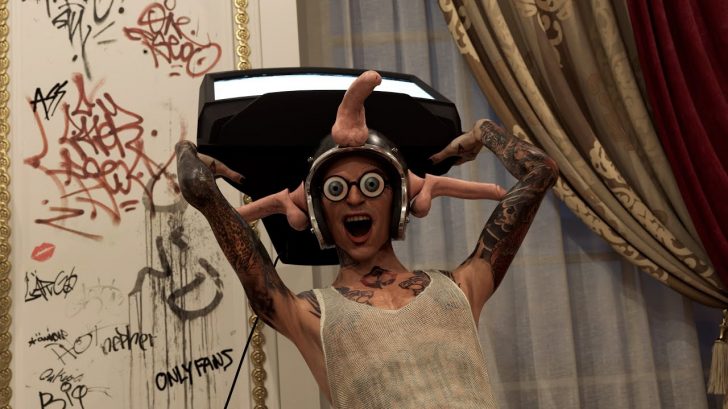 Over the last week, Tommy Lee has teased us with fresh video releases, and his “Bouncy Castle” video did not disappoint. It’s actually most likely one of the craziest things we’ve seen in a while.

Smearballs provided the animation for the video, which shows a variety of “Tommys” causing mayhem in a hotel room as Lee’s hot new song serves as the music. It’s a little Tommy overload with some lighthearted references to the Motley Crue drummer’s, yeah, larger-than-life demeanor.

Lee, who is most known for playing drums in Motley Crue, has gained a lot of attention over the years for his genitalia, which is clearly displayed in the song video. Yes, Lee’s penis was depicted in the Pam & Tommy miniseries earlier this year. Later that year, when he shared a nude selfie on social media, it garnered even more attention.

This video contains a number of crude jokes, including one where Tommy is lying on a couch with a huge snake rising from between his legs, and another where the Motley Crue drummer smashes a television while wearing a penis and balls helmet.

Several “Tommys” in the video include a Minotaur Tommy, a drummer Tommy playing drum kit with plenty of boobs, a clown Tommy sucking on a helium tank, a deathbat Tommy wearing a diaper, and a heavily built Tommy with a bikini-clad woman bouncing on his chest. At the moment, a large ball of possessed Tommys is likewise rolling down the hallway outside. Not to mention the headless Tommys that were crawling to safety from the mayhem, hanging from the ceiling, and being eaten in a fireplace.

Although Lee clearly paints an image you won’t soon forget, the song itself is also rather good. Fans of Lee’s rock drumming will like “Bouncy Castle,” which brilliantly combines those beats with the drummer’s love of electronic dance music. There’s little doubt that the groove will make you want to dance.