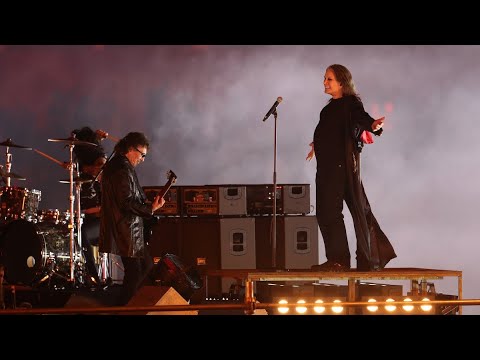 Half of Black Sabbath – singer Ozzy Osbourne and guitarist Tony Iommi – performed on Aug. 12 during the closing ceremony of the Commonwealth Games, the “Olympics” of countries ruled by the British crown. A sorely missed absence was bassist Geezer Butler, replaced by Adam Wakeman, who used to take over keyboards on Sabbath’s last tours.

Now, in an interview with Birmingham Live, Iommi explained the absence of Butler, revealing that recent times have not been very easy for his colleague. According to the guitarist, the bassist was not in shape to perform due to some problems that had plagued him in recent weeks.

“I don’t think he wanted to come over as he hadn’t been well with COVID,” Iommi revealed

Butler additionally had “been on holiday to Kenya and to Italy and had had an accident on a boat, cracking or breaking a rib about three weeks ago,” the Black Sabbath guitarist explained, “so he was not quite in fine fettle to come over to play.”

Iommi added, “It’s a shame because we’d talked for a long time about the possibility of playing at the Commonwealth Games.”

In addition to Geezer, drummer Bill Ward also did not participate in the performance. He has already been absent from the band’s last tours and on this occasion, he was replaced by Tommy Clufetos.

Iommi was astounded, otherwise articulating his satisfaction and the quality of the performance. “I never thought that Ozzy would be able to come and perform at the Commonwealth Games because of his operation. And then when he said he was coming over we were asked to keep it all a secret so that nobody would know.”

The performance, which played the intro of “Iron Man” spliced ​​with “Paranoid”, marked the first meeting between Ozzy Osbourne and Tony Iommi live since the end of Black Sabbath. It was also Madman’s first appearance on stage after revealing his Parkinson’s diagnosis.

Iommi features on two tracks on Osbourne’s new solo album, “Patient Number 9”, which comes out on September 9th. One of them, “Degradation Rules”, has already been released for an audition.

Also participating in the album are Eric Clapton, Jeff Beck, Zakk Wylde, Robert Trujillo, Chad Smith, Mike McCready, and the late Taylor Hawkins. As in the previous one, “Ordinary Man”, the production was in charge of Andrew Watt.