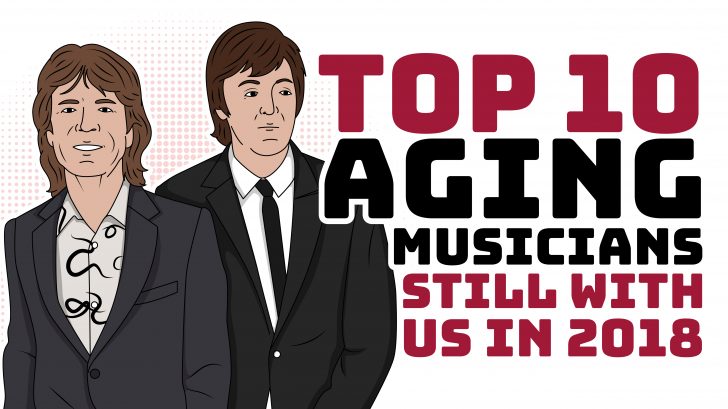 Protect Them At All Costs

We lost several iconic musicians in 2017 and it broke out hearts to see them pass away one-by-one. But we have other legends still with us this year and we’ll probably spend the next few months saying prayers that they make it through to 2019.

You see, they’ve become part of our lives – their songs were our life’s soundtrack and we knew almost everything that happened to them. And somehow, it feels as though they are already a part of our family, a part of us. So now, consider this a tribute to these icons who changed our world one song at a time.

Tony Bennett is a precious cinnamon roll and people who got pissed at him at this year’s Grammy Awards for not moving out of Rihanna’s way need to learn something – he’s Tony freakin’ Bennett. He doesn’t move out of anyone’s way, they move out of his.

And besides, he deserves a lot of respect because let’s face it, few can even manage to touch his greatness.

“I could have retired 16 years ago but I just love what I’m doing… They know that I’m 90, and I come out and I’m in top shape. After the third or fourth song, they start flippin’ out. I’m getting five or six standing ovations a night. When they start acting like that, I just go home very pleased.” – Tony Bennett

Frank Sinatra once said that Tony has “four sets of balls” and man, that says a lot. Even at 91, he still has it. Oh wait, that’s actually an understatement. Let’s just say, he still slays it each time he steps into the stage.

They don’t make them like this anymore. But still, we are lucky to be walking the earth the same time as Little Richard. The fact that this man who somehow helped build the foundation of rock ‘n roll is still around should be considered a miracle.

He was charismatic and his musicality is just off-the-charts. Today’s musicians could learn a thing or two from him.

“Pounding the piano, howling his lyrics and screaming in a wild falsetto, Little Richard the so-called Quasar of Rock was integral to the birth of rock & roll… In his own way and as he is wont to exclaim to anyone in earshot, he is the king of rock & roll.” – The Rolling Stone magazine

He’s unique and he knew how to put on a good show. He may have retired from the limelight but his contribution to rock music will always be remembered. Besides, his influence is practically everywhere.

Tina Turner is the very definition of a survivor. She managed to carve a successful career spanning almost six decades and we all know it wasn’t all rainbows and butterflies. She experienced domestic abuse in the hands of Ike Turner.

They rose to fame as a duo but when she pursued a solo career, it really took off. Aside from winning 11 Grammy Awards, she also has a total combined sales of 180 million copies (both album and singles). That’s quite a feat.

“And I won’t stop until I get that respect. I may not ever get it completely, because my life has been too hard so far. But I’ve gotten a taste of what that respect is probably like, and I like it. I may not be able to get that class, because I didn’t act my life, I lived it.” – Tina Turner

She’s a total performer and she knew how to leave the audience in awe. When she sings and dances, nothing else matters.

So Keith Richards surviving the apocalypse is still insanely funny. And we may joke all we want but we’re still mighty grateful him and Mick Jagger are still around doing what they love. Besides, what else can we say? They’ve already proven themselves worthy of all the fame and credit they got.

And they’re both filthy rich so they actually have the option of retiring and spending their days at home with they grandkids. But we totally understand why they want to continue performing.

“I’m not thinking about retirement. I’m planning the next set of tours, so the answer is really, “No, not really.”” – Mick Jagger

And you know, they’re still pretty cool considering they’re way past 70. At that age, we can only hope we’d be half as awesome as them. They’re probably the coolest grandpas too – crazy stories and rebellious youth. You can just imagine what they tell their grandkids!

Pete Townshend may have abandoned his guitar smashing ways but he is still the bad ass rockstar we know. And he remains influential both as member of The Who and as a solo artist. He has written several masterpieces and when we think of him, we think of his massively entertaining showmanship.

He basically does everything just to keep the audience entertained. And he has perfected pretty much every trick in the book – jumping a few feet into the air or executing his trademark move the “Windmill.”

“Basically it’s a gesture which happens on the spur of the moment. I think, with guitar smashing, just like performance itself, it’s a performance, it’s an act, it’s an instant and it really is meaningless.” – Pete Townshend

Aren’t we all glad we got to witness his brilliance? So you know what we should do this year? Protect this legendary guitarist at all costs.

Last year when it was reported he was spotted at LAX looking frail, we were frantic. Not Slowhand, please. But fast forward, and he’s alive and healthy – well enough to hold a show this July in fact. Eric Clapton has affected more lives than we could count. His music just speaks to your soul.

He may not be as energetic on stage as Mick Jagger but he plays with so much passion, you can’t help but be enchanted.

“I would add one thing – listening to music became just as important as being able to play. During all of those periods of my life, I found new or old music that helped me, that got me through even when I wasn’t playing well or I wasn’t playing at all.” – Eric Clapton

Think about all the people who were inspired to pick up the guitar because of him. We have a lot to thank him for.

These golden boys – what would life be without ever hearing “Stairway to Heaven” or “Kashmir” or “Whole Lotta Love” or “Immigrant Song?” Also, can we all take a moment to appreciate how insanely good Robert Plant and Jimmy Page still look even with those gray hair?

Like, who the heck manages to look ridiculously sexy in their 70s or late 60s? We don’t know what deal they made with the devil but dang, if we look half as gorgeous as them at that age, we’d be more than happy.

“Everything else was a side show. It’s part of the story. But there would be no story without the work we put into the songs, the shows we played. Without that, nobody would care about the other stuff.” – Jimmy Page

This 2018, we’re hoping they’d eventually come around and decide to reunite and tour again. They can even invite Bonzo’s son Jason Bonham!

This year opened with the sad news that Neil Diamond is going to retire after he’s been diagnosed with Parkinson’s Disease. It was heartbreaking to say the least. Neil Diamond is much-loved by pretty much everyone and he’s given us plenty of classics.

He’s an amazing singer-songwriter and while he’s obviously not the same as he was in his prime (no surprise here, really), he still knows how to entertain his audience and keep the atmosphere fun and happy.

“I plan to remain active in writing, recording and other projects for a long time to come. My thanks goes out to my loyal and devoted audiences around the world. You will always have my appreciation for your support and encouragement. This ride has been ‘so good, so good, so good’ thanks to you.” – Neil Diamond

Even though we’d love to see him perform and continue doing what he loves, his health remains the topmost priority.

Paul McCartney is undoubtedly one of the greatest musicians to ever walk this earth. With a career spanning more than six decades, it’s no wonder he is worth billions of dollars. And with that money, he could just go and buy himself an island and enjoy the peace and serenity.

But like the other ones on this list, it’s mighty difficult to stop doing what you love.

“It’s always held a fascination for me, getting up in front of people and performing. From the beginning, I was trying to figure it out: What’s the best way to keep true to yourself yet have people on your side?” – Paul McCartney

His contribution to rock ‘n roll is immeasurable. Aside from writing numerous great songs for The Beatles and Wings, he also managed to pursue a successful solo career. He didn’t need to be extra or flashy. There were no theatrics. It was just him and his music.

Bob Dylan is one of those musicians who doesn’t care about rules and what other people think. It’s his craft and he will do what he pleases with it. We’re pretty sure he wasn’t exactly ecstatic or jumping with joy after being referred to as the ‘voice of a generation.’

He probably reacted the same way when he found out he would be awarded with the Nobel Prize in Literature.

“From 1970 till now, there’s been about 50 years, seems more like 50 million That was a wall of time that separates the old from the new and a lot can get lost in this kind of time.” – Bob Dylan

Also unlike other musicians, Bob Dylan gets better over time. From his singing to his songwriting, he always took it to another level. And his influence transcends genres too. Let’s be honest, no one can hold a candle to him.

There’s nothing else to say but THANK YOU FOR YOUR MUSIC!