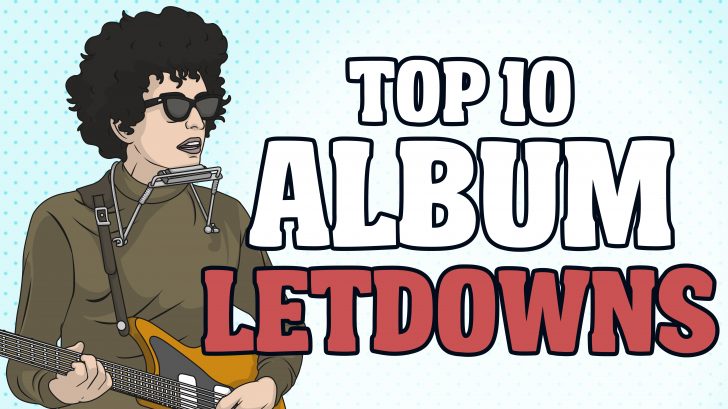 No Expectations, No Let-Downs

For an artist, the hardest part isn’t reaching the top; it’s staying at the top. How do they achieve this? By crafting a groundbreaking and bar setting albums.

Most of us were waiting tediously in line to buy the new records of one of our favorite bands or artists, but after listening to them, we just kinda unexpectedly want to destroy them or throw it out the window while we drive. We’ve all been there.

But what is the main reason why an album could possibly become so disappointing? The answer would be failing to live up to fans expectations. It’s too painful for an album that really disappoints it has to come from the artist that matters for most of us.

One of the most famous and iconic heavy metal band in history, they made their reputation as The Godfathers of Thrash Metal in their heavy, fast, and angry melodic metal music.

After the “Reload” album, 6 years passed before they’ve released a new one, it was titled “St. Anger”. It was an album that disappointed a lot of fans. It only felt like a noise.

It was very different than their other great albums. The melodies were so uninspired, guitars kind of out of tunes, it lacks the Kirk Hammett solos, and the snare drums that sounded like a 3-year-old was playing or like a big size metal garbage disposal drum being smashed by an angry dude who doesn’t like “St. Anger”.

After waiting for almost 17 years, the album was expected to be a spectacle but it seems that Axl Rose just wasn’t made for this generation.

We were led to believe that Axl Rose was creating something epic in those long years locking himself away in the studio. As much as we came to expect, we were so hopeful that it would be a masterpiece, a piece that will bring rock n’ roll to its rightful place. But the album came out to sound overproduced and has too many layers upon layers all done with tools.

It just makes it real that Axl was never capable of anything without the original members. But even without Slash, Duff, and Izzy, everyone had to listen to this anyway.

Some of us have heard all of Dylan’s records, every album leading up to Self Portrait. Each one is amazing in almost different ways.

One can even argue that Self-Portrait album was unfairly criticized by many due to the records before it. Well, Bob Dylan was tired of with people knocking at his front door, so he decided to step aside. The album wasn’t anything like the poet used to be. It was something that Dylan hadn’t done previously and people were surprised.

The album was out of focus and contained a lot of covers. It kinda makes you ask why Bob Dylan was covering Paul Simon songs.

Some considered it as a classic but for some people, it was a joke.

For a lot of Neil Young fans, Trans was a terrible album for them and they thought Young was trying to send a satirical message about the direction of music in the future. Nonetheless, this was just a myth, maybe the album is not that good for the framework of Neil Young’s other excellent albums. It is very different from what we used to hear from him, the classic rock n’ roll and country music.

It sounded so futuristic, he made the album influenced by the electronic music of the decade. An electronic movement was forming during the 80’s and the main reason behind this was Depeche Mode and Kraftwerk. Though despite having a different style in this album, the record has some good songs that were similar to the normal songs of Neil Young.

Famous artists releasing an album with a different style is very common, but a lot of them fail miserably.

At the time of this album’s release, fans were still mourning the loss of Keith Moon while punk and new wave were emerging, taking over the press space and radio air-waves.

Many people have blamed the failure of this first album without Keith Moon on the conservative style of replacement Kenney Jones. Everything about it just wasn’t up to The Who’s standards. Why didn’t they just used Moon’s sense of ambition in making this album?

It was the very first time we tried listening to this album and switched over to something different after only a few songs. It was hard to listen to and that the fact that Keith Moon was gone.

This is the album that changes everything for Styx, it is so surprisingly bad that it’s shocking, – even for them.

Some of you are lucky if you’ve never heard “Babe” before, but most were very unfortunate to hear it on the radio. A terrible ballad that sounded so cheesy with a melody so awful that threaten you to listen to pop music. They did it so badly that it hurts.

People were wondering, what’s a song like “Babe” doing on a Styx album in the first place.  Yeah, it’s a love song, but what I mean is they never really did any love song with a dated electric piano before. This band was supposed to be a progressive rock group. It seems they’ve become a new pop group on this album.

A very difficult time for Van Halen before releasing this album. They were falling out with their vocalist Sammy Hagar and attempted to reunite with David Lee Roth but was not available.

This was the only album fronted by Gary Cherone that was ignored by longtime fans, becoming the first release that failed to achieve platinum in the U.S. Although, Eddie Van Halen did his best to make the album good, well, for providing his guitar skills (of course), but he failed miserably.

This album was unbelievably bad it did not get the attention that most thought it would. It was everyone least favorite Van Halen’s piece.

Knowing the Stones pretty well, they’ve made some worse albums, to be sure. But none of them could have matched this one for its sheer drop-off in quality of music.

It was a definite let-down waiting to happen. This was not only weak but it was also bad compared to the other albums that preceded it in The Stones catalog. They’ve become lazy as turds in making this album.

The album was the ending period of the sustained brilliance of The Rolling Stones. They were amongst the most impressive rock band in history. Everything about this album was something we didn’t quite expect to get from them.

We hold a very keen relationship with Queen’s music. For some reason, we consider them as Gods of Music, though quite a few groups surpassed them, still, none have managed to foster the amount of energy that this group has generated.

The album was an ineffectual mix of robotic disco, funk, and even R&B. As for the entry into the world of disco, the album is not that bad, but not very good either.

As much as I don’t like to say this, this was the worst thing that the Queen crafted. It was a huge step-down, everything about it was not Queen used to be. For example, the opening track “Staying Power”; we don’t hear the drums that it used to sound before, the creative ways have changed and we’re not even sure if there’s any bass on it. It sure ain’t there!

It was the very first released album of Pink Floyd that did not feature founder and bassist Roger Waters. It was a new phase that represented a definite transition in the band’s history.

The album was more of “Necessary Lapse of Band Participation.” It was a dark album for the most part of it. The Floyd kind of stoop down to the level of flashier sounds produced by most bands in the 80’s. Well, for one thing, it was produced in the 80’s, it would definitely sound like that.

Is it bad or is it just really misunderstood? If they could have just spent a lot of time refining the songs, the album could have turned out to be something great.