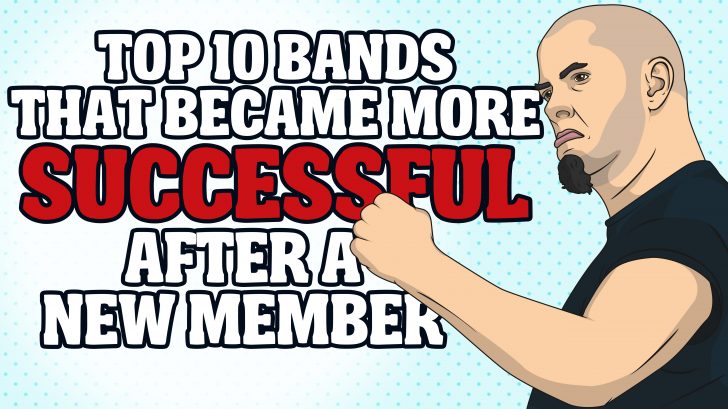 Who’s better? The New Guy Or The Old One?

The bands that carried on with new members. Few have achieved the success that they sought for in the music industry by changing or replacing band members. For example, Axl Rose replacing everyone else in Guns N’ Roses. If not for these major changes, what would have happened for these bands? Will it become a failure for their careers or a huge success? With all that being said, let’s take a peek for the Top 10 Bands That Became More Successful After A New Member,

The bass player for Tool. He replaced original bassist Paul D’Amour in 1995. Both were great and fitted exactly where they were. Paul D’Amour fitted perfectly for the first two album and Justin fits exactly for the rest and the rest to come. With Chancellor, the band became more successful after the replacement. He is more creative and better tone. His works for their Lateralus (2001) and 10,000 days (2006) albums has surely defined the band’s success despite the replacement.

“IF STEVE CLARK WERE ALIVE, HE’D STILL BE IN THE BAND TODAY”

Before joining Def Leppard replacing Steve Clark in 1992, Vivian Campbell started his career in the early 1980’s as a member of Dio and has also worked with Thin Lizzy, Whitesnake, Sweet Savage, Trinity, Riverdogs, and Shadow King. Since then he became a member of Def Leppard. After replacing Steve Clark he has been working with the band for different albums, Retro Active (1993), Slang (1996), Euphoria (1999), X (2002), Yeah! (2006), Songs from the Sparkle Lounge (2008), Mirror Ball – Live & More (2011), Viva! Hysteria (2013) and Def Leppard (2015). Considering that he never really fitted with the band’s style, Vivian Cambell surely has contributed something for the growth of the band.

Following the departure of co-founding member Pete Willis, Phil Kenneth Colen was the replacement in 1982. The drinking problem of Pete Willis was the excruciating reason for his replacement. Since then Phil Collen played a vital role for Def Leppard helping them to set the musical tune of the band. He perfectly fits in with the band. What he did for the band was surely the ultimate success not that everyone was so receptive to it at first but he absolutely did everything to get Def Leppard on top and I think he did even more than that.

The band Genesis survived following the departure of Peter Gabriel with the help of Phil Collins after replacing him in 1975. But in defense of both, Phil and Peter eras got great music with different amazing styles. But the fact that there was more of a personal touch when Phil Collins took over the band, Genesis seemed to have more emotions and definitely pushed more to success. Well, I guess if Peter stayed with Genesis, I don’t think they would have made it.  Phil Collins was without a doubt the perfect lead for Genesis into stardom.

After replacing Robert Fleischman in 1977, Journey became a huge success. Providing nine albums for the band. Easily one of the best singers from the 80’s. Known for his wide vocal range, Don’t Stop Believin and Oh Sherrie was the proof. So, Journey without Steve lost their mojo. He was the newfound success that brought the band to the top. Some folks would disagree with the fact (as most people do not know) that Steve Perry was just a replacement and some might argue also that Fleischman was even better than Perry.

He did not actually replaced Syd Barrett because Gilmour was actually a member of Pink Floyd playing besides Syd Barrett, but after Barrett left the band for health issues. David Gilmour fully filled in the shoes of Syd Barrett. The death of Barrett was a great deal of lost for Pink Floyd.

I’m pretty sure we are all aware David Gilmour can sing beautifully, it’s basically the answer to the question why he was the lead singer after Barrett’s departure. He fits perfectly in the spot. He led Pink Floyd right on the course.

Nothing new for Metallica, so many replacements, it started with Dave Mustaine to Kirk Hammett, Cliff Burton to Jason Newsted and now Robert Trujillo for Newsted. After auditioning for the replacement of Newsted as bassist. Long before Metallica Trujillo played for the Great Ozzy Osbourne and some bands like Suicidal Tendencies and Infectious Grooves. He was definitely no joke, although Metallica was currently and still on the top, Robert Trujillo helped them to achieve more success, giving the groove for their albums Death Magnetic (2008) and Hardwired… to Self-Destruct (2016).

The one who saved Pantera! After Terry Glaze quit the band, Phil Anselmo took over. Pantera as we know it would have never been a huge band if not for him. They became one of the most influential band for metalheads. When he arrived, the band’s musical pace had changed, releasing three mainstream metal albums. Introducing a new genre, the Power Metal. But he was also somehow at some point their downfall, making some racist comments in public, alcohol and drugs abuse took their success. But his voice and screams was definitely the best for metal. Their song “This Love” was one of the best metal performances of all time.

“Di’Anno famously sang on Maiden’s first two records, Iron Maiden and Killers”. The legendary vocalist for a legendary band who joined Iron Maiden in 1981 brought something new for the world of metal. If not for Bruce Dickinson Maiden would not have gotten as huge as they did. The “Number of the Beast” was their most explosive success. He was without a doubt an incredible frontman. So if Paul Di’Anno would have stuck around, they would not have make it so huge and might have been lost so early in their career. Kudos for Bruce Dickinson.

Probably the easiest one. Who would have thought that it would have been possible to replace Bon Scott? I think if not for Brian Johnson they would not have made it past the 80’s. Back In Black would not have happened if not for Brian Johnson. Yeah, it is a sure thing that Angus and Malcolm were definitely the writing core for AC/DC but Brian Johnson was the phenomena of their huge success. He solidified their career, turning great ideas into great rock and roll music. But what if Back in Black was made Bon Scott? It would have been so interesting.