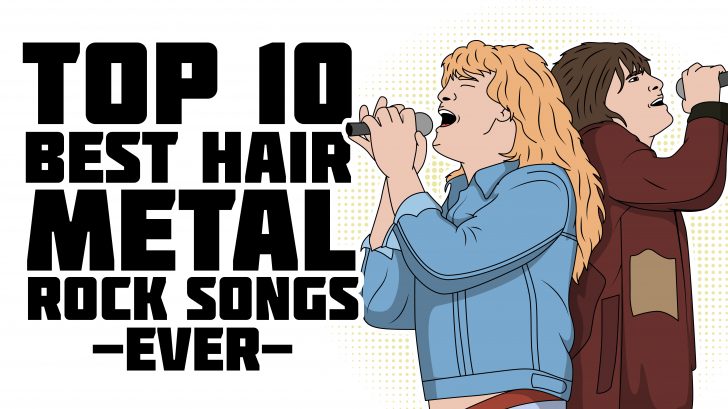 In The Name of Good Music and Fabulous Hair

You gotta love the ’80s, man. It’s that decade when people were all about hair metal. It’s more than just power ballads and songs so cheesy, they make you cringe. Love it or hate it, the world was never the same. Think about it – what would we be without the spandex, tight leather pants, bandanna, sparkly vest and the glorious, glorious mane? Would we ever love this era as much if we’ve never heard of Guns ‘n Roses, Whitesnake, Poison and Van Halen?

Haters say they’re not exactly rockstars because they spend more time worrying about their makeup and glitters than making good music. We totally disagree with that one. Are these songs the best that rock music has to offer? Maybe not but they had their shining moments and we can never imagine the ’80s without them and their overplayed songs.

The hair metal bands were flashy and incredibly dramatic but they gave us tracks you cannot escape from. Someday soon, you’re going to say you miss those days when they still made these tunes and maybe, just maybe you’re going to hate yourself for it.

Is there anything more ‘80s than this song and music video? It captured the essence of the whole decade in less than five minutes, ha. So anyway, this is Autograph’s most famous song and sadly, their only Top 40 hit. And thanks to MTV’s heavy airplay, that gave the track an extra boost and made it more popular.

Also, we can’t help but laugh at the product placement. Paper Mate sure got their money’s worth.

“Yes, of course because they are still one of my favourite bands and therefore they influence me in writing my own material. My other influences from bands that I admire are obviously Van Halen and AC/DC.” – Autograph’s lead vocalist Steve Plunkett

What’s funny is that the band was pretty surprised by the song’s commercial success. They definitely didn’t think much of it but lo and behold, it appealed to mainstream audience because it’s obviously catchy and has that ‘hook.’

So you may roll your eyeballs or scoff at this uber-cheesy song but the guys from Europe are still cashing their checks and laughing all the way to the bank. It’s unarguably one of the most enduring songs from the ‘80s. You can still hear it everywhere – from sporting events to commercials.

And let’s not forget how people recycle the song over and over again every single New Year’s Eve.

“I had the demo without vocals, and I was singing it over and over again. The music was almost like a soundtrack to a movie, about leaving Earth, and that the Earth was spent. And one day, we’ll probably have to leave this place. It was kind of a dream-like lyric, but that was the backdrop for it.” – Europe’s lead vocalist Joey Tempest

This always, ALWAYS gets stuck in your head and it’s pretty dang hard to shake it off too. And even if you’re not a huge fan of the song, we’re going to bet you can sing the words and probably even the riffs too!

Say what you want about the group but at their prime, Mötley Crüe was so good they made wearing spandex look cool and sexy. Is it cheesy? Yep but it’s undeniably good. It’s heavy, energetic and catchy. It’s seriously one of those stuffs that gets you all pumped up.

From the guitar playing to the vocal performance – everything here is on-point and it’s easily one of their finest musical moments ever.

“There are differences and friction. It’s like having a girlfriend and you can’t stand her, but it’s the best sex of your life and you keep going back for the sex, even though she drives you crazy. That’s kind of what Mötley Crüe is.” – Nikki Sixx

The music video may not be for everyone though because Nikki Sixx set himself on fire and Mick Mars drooled blood because really now, the band would obviously do anything to put on a good show.

If you were a teenager in the ‘80s and you say you don’t know the lyrics to this song by heart, we know you’re lying. Lol. You see, this was such a huge hit it was difficult to escape this tune – from the radio stations to MTV, it was everywhere.

It was one of those tracks that helped Bon Jovi to secure a spot in the rock ‘n roll pantheon. And aside from the catchy tune, the lyrics are also uplifting which made listeners like it more. Besides, we already know Tommy and Gina’s story all too well.

“It deals with the way that two kids – Tommy and Gina – face life’s struggles and how their love and ambitions get them through the hard times. It’s working class and it’s real… I wanted to incorporate the movie element, and tell a story about people I knew. So instead of doing what I did on ‘Runaway’, where the girl didn’t have a name, I gave them names, which gave them an identity… Tommy and Gina aren’t two specific people; they represent a lifestyle.” – Jon Bon Jovi

Let’s all be honest, this is an ‘80s anthem and it’s one of the best songs hair metal has to offer. And for it to still be popular three decades later, that’s pretty impressive.

The thing about the hair metal era of the ‘80s is that it won’t ever happen again. The hair, the outfit, the music, everything – it was absolutely refreshing. Twisted Sister could have matching spandex outfits with outrageous blue and red makeups and still look badass.

They may have other great songs but hey, this one definitely takes the cake. And man, don’t even get us started on that music video. It’s just epic!

“With ‘We’re Not Gonna Take It,’ whether I was singing about my parents, my teachers, my bosses, my peers, people around me, I felt it was important not to define it by actually naming names and singing, ‘Dad, you’re so trite and jaded, I hate my teachers, too.’ And thus, the song has had a life in sporting events, at political rallies, at protests, pretty much anybody who’s not taking something from somebody else, they’re going to break into ‘We’re Not Gonna Take It’ all over the world.” – Dee Snider

Anyone who hasn’t listened to this yet is missing out big time. It’s one of those songs that’s difficult not to love. And it’s so good that it’s hard to shake it off.

Back in the ‘80s, Ozzy Osbourne was blonde. He also wore tight-fitting outfits and while he didn’t wear excessive makeup, he always made sure to have enough eyeliner to reinforce his Prince of Darkness persona. And “Crazy Train,” how can we forget this epic masterpiece?

It’s bad ass on so many levels thanks to Randy Rhoads and his mad axe-slinging skills.

“Randy had the basic riff, the signature riff. Then we worked on music together. He needed something to solo on so I came up with a chord pattern and the section for him to solo over. Before it was called ‘Crazy Train,’ before we even had a title, Randy and I were working on the music.” – Bassist Bob Daisley

It has one of the greatest solos of all time and there’s just nothing quite like it. So you see, not every hair metal song is just about the glam. Most of them are pretty serious when it comes to music.

David Lee Roth is perhaps the ultimate ‘80s icon. He could wear a sparkly coat with loose pajama-looking pants underneath or leather pants with red feathers and still slay it every single time. And oh, don’t even get us started on those kicks and jumps. No one does it like him.

So, maybe some of you think there are way better songs than “Panama” but hey, this is still Van Halen at their prime. The riffs, drum fills and vocals – it’s just too good!

“I have no memory of coming up with any of those riffs. Even the stuff I wrote for the last record, I don’t remember. It just comes to me. I never sit down and decide to write a song. I’ve never done that.” – Eddie Van Halen

It’s great to sing along or dance or kick around to. You know, whatever floats your boat. But it’s still quite possibly the heaviest song in Van Halen’s catalog and anyone would easily pick this over “Jump!”

Okay so this may not exactly be from the ‘80s but it’s definitely an essential hair metal song. If we’re going to talk about sparkly outfits, outrageous makeup, and platform boots – it would be a crime not to include KISS on this list. Besides, “Rock ‘n Roll All Night” is a real classic.

Love ‘em or hate ‘em, they did hit the jackpot with this track. So it’s really no surprise that it became their signature song.

“Originally Gene and I would tend to help each other fill in the gaps. ‘Rock and Roll All Night’ came about because we felt we needed an anthem, a song that could be the rallying cry for all of our fans.” – Paul Stanley

You can be a non-KISS fan but if you don’t sing along, then there’s definitely something wrong with you. It’s catchy, fun and carefree. It has that feel-good vibe and it’s one of those things you’re not sure whether to dance along or headbang to.

The hair metal movement owes so much to Quiet Riot and this particular song. It’s the stuff parents warned their kids about and man, was it just so good blasting this on the speakers. Besides, if other glam rockers made you cringe, that’s definitely not the case here.

Even with their matching or complementary prints, they looked seriously cool – the I-want-to-look-like-them kind of cool.

“We were huge fans of AC/DC, so we wanted something that had a very simple, straight ahead groove at a certain tempo. It went through a lot of different changes, and what I mean by ‘changes,’ a lot of that song has to do with the tempo. I listen to a lot of classical music and jazz.” – Drummer Frankie Banali

Partly thanks to MTV for putting their music video on heavy rotation and therefore allowing hair metal to break into mainstream. Yes fans of Twisted Sister and Mötley Crüe. You can thank Quiet Riot.

Some may prefer “Pour Some Sugar on Me” but nah, this right here is a rock anthem. This is hair metal at its finest. Remember the first time you heard this song? It was like a punch in the face or a bucket of ice cold water over the head. You were probably like, “What just happened?”

Yep, it’s awesome like that. The tune is so catchy and a real earworm that it just stays in your head for like days on end.

“We’d have never written ‘Rock Of Ages’ if we hadn’t have heard ‘I Love Rock And Roll’ by Joan Jett. But we didn’t steal her entire sound. We took that one song and thought, ‘This is very anthemic. We could get away with writing songs of this standard and style.’ And that’s what we did.” – Lead vocalist Joe Elliott

From the song to the music video, it’s ridiculously good. They made history with this one.