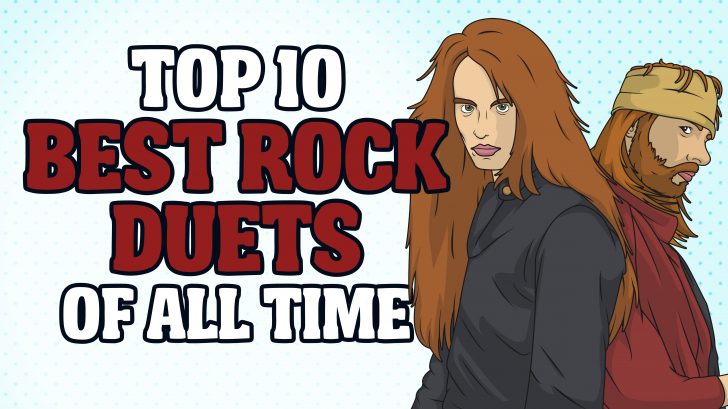 The Pairings We All Needed

In rare instances, rock gods convene and decide to give us a match made in musical heaven. These duets offer us the best of both worlds. Most of them are surprisingly good – we say ‘surprising’ because it’s the collaboration we never thought possible, not in a million years. But of course, it blew us away. On paper, it probably didn’t seem like the best idea but lo and behold, together they managed to silence the haters by giving us epic masterpieces.

Joining forces with another icon not just in rock but even from another genre entirely isn’t new. What else can we say? Sometimes, two legendary voices are better than one.

This is two minutes of pure rock ‘n roll bliss. We’ve always known Sammy Hagar is one fine rocker – his time with Van Halen already showed us what he was capable of as a vocalist. But this collaboration with Kid Rock and Joe Satriani is definitely something else.

It’s from Sammy’s twelfth solo album “Sammy Hagar and Friends” which is, well, star-studded to say the least. Some of his ‘friends’ include Neal Schon, Ann Wilson and Chad Smith.

“I just want to say something about Kid Rock. I was blown out of the water by that guy. I mean, look, I’ve seen him on TV, I saw him early on do a couple of songs, he’s jammed with me in Detroit three or four times. But I had no idea that he was that good. The guy is really the real deal. I think he’s found something real important for rock.” – Sammy Hagar

The thing is, Sammy also invited James Hetfield to sing even just the “Knockdown! Dragout!” part but the Metallica frontman refused saying that although he’s flattered, it wasn’t his style. Still well and good though because this song definitely rocks.

This is one of those songs that you just have to play really loud. It’s probably the ultimate bar song and we can only imagine the drinking session after (or maybe even BEFORE) they recorded this track. Besides, INXS is already a great band but adding in Jimmy Barnes – wow, it’s the best of Australian rock.

And Jimmy’s voice is insanely good – how can anyone not like this?

“I’ve had a problem playing Good Times live since Michael died. It’s driven me nuts. Everyone loves it, they want me to play it and I didn’t want to play it any f—ing more because it’s not the same without Michael.” – Jimmy Barnes

They were great friends and you can tell just how much fun they were having when they collaborated. It’s one of our favorite cover versions ever. Oh and it was badass enough to be included in The Lost Boys soundtrack.

This song is beautifully heartbreaking. And with Peter Gabriel and Kate Bush perfectly in sync with each other, you would never think she wasn’t his first choice for the duet. He originally wanted to enlist country singer Dolly Parton but she turned him down.

We’re glad she did because we can’t imagine a more incredible chemistry than Peter and Kate’s. And of course, the music video may be simplistic but it captured the essence of the song.

“Because there was a reference of America roots music in it when I first wrote it, it was suggested that Dolly Parton sing on it. But Dolly turned it down… and I’m glad that she did because what Kate did on it is… brilliant.” – Peter Gabriel

There’s a certain intimacy about this track which we love. It might be extremely sad and depressing (the first time you heard it you probably cried too) but it’s a masterpiece. This is the duet we never thought we needed.

Eddie Vedder and Chris Cornell – what could possibly go wrong? Nothing, absolutely nothing. You know, you may or may not believe that some things are meant to be (yes, that’s cheesy) but this thing right here is proof.

You see, Chris ran into some problems with the vocals and with Eddie just hanging out in the studio, the latter just stepped up to the mic and started singing. Basically, he blew everyone away that day.

“He sang half of that song not even knowing that I’d wanted the part to be there and he sang it exactly the way I was thinking about doing it, just instinctively.” – Chris Cornell

Eddie called “Hunger Strike” as the most meaningful song he’s ever been on. And we totally get why – it was the first time he heard his vocals on record and it was such an incredible collaboration – unplanned and unexpected but it worked.

6. David Bowie and Mick Jagger – “Dancing In The Street”

Let’s just get this over with – the music video is painful to watch. It makes us cringe every time. But the song by itself is actually pretty good especially when you take into consideration the fact they practically rushed their recording (both the track and the MV were finished in less than 24 hours) because of the tight schedules of both rockstars.

Also, it was for a good cause. They collaborated for the purpose of raising money for the Live Aid famine relief.

“We banged it out in just two takes. It was an interesting exercise in how you can do something without worrying too much.” –Mick Jagger

The song was a hit too. It peaked at #7 on the US Billboard Hot 100 and it also topped the charts in UK, Australia and The Netherlands. Sure, they may be trying to upstage each other (both David and Mick were always so extra) but musically, we love the chemistry.

5. Sebastian Bach and Axl Rose – “Love is A Bitchslap”

It’s the song you need blaring in your car stereo. And it’s what happens when two rock ‘n roll royalties come together to make one kickass song. With all his craziness, Axl Rose was never a mediocre vocalist. He was far from it. And this duet with Sebastian Bach proves that he may be a bad boy but he’s a great collaborator.

Of course it goes without saying that they’re good friends in real life.

“At the end of every single night going into the early morning or late afternoon [laughs], he [Axl Rose] would always say, “But Bas, never say never.” He would always end the night with a “but you never can tell, you know, maybe someday.” One part of me was surprised and the other part was not surprised.” – Sebastian Bach

They reunited on stage back in 2016 when Sebastian joined Guns ‘n Roses and performed “My Michelle.” And well let us borrow what Sebastian said, “Is this fucking great or what?”

It’s not just this song but the entire album they collaborated on. “Raising Sand” is an epic masterpiece. Robert Plant is a rock god while Alison Krauss is a bluegrass country legend. So who would have thought they would make stellar music together?

When we mentioned earlier about having the best of both worlds, they were the ones on our mind. From the vocal harmonization to the chemistry, they raised the bar for everyone else.

“I was basically tutored by Alison. She’s a very precise singer who’s done more duets than you can shake a stick at, and I was thinking: help, I’m a rock singer, no matter what I do. But, of course, I’m not: I’m just a guy that sings songs.” – Robert Plant

Their record received generally positive reviews. It’s the pairing we didn’t see coming but what a surprise. Their duets are practically effortless and yet excellent all the same.

3. Stevie Nicks and Tom Petty – “Stop Draggin’ My Heart Around”

More than an incredible collaboration, Tom Petty and Stevie Nicks have one of the greatest friendships in rock. When they toured together back in 2006, Tom declared her an “Honorary Heartbreaker” and even gave her a platinum sheriff’s badge which said, “To the only girl in our band.” Awww, isn’t that the sweetest?

It’s Stevie’s first single and the first hit from her debut solo album. And do we love it? Heck yes, we do.

“I said: ‘Okay, I’ll do it.’ So, anyway, ‘Stop Draggin’ My Heart’ became a huge single, all because Mr. Tom Petty was generous enough to give me that song.” – Stevie Nicks

Several artists covered this but nothing even comes close to the original. Tom and Stevie created magic that no one can replicate. Besides, they may not have been lovers but their duet was definitely one for the books. That’s the kind of friendship we all aspire to have.

2. Bob Dylan and Johnny Cash – “Girl From The North Country”

The best word to describe this pairing is “magical.” If you think otherwise, then you’re listening to it wrong. There’s nothing flashy or extra here. And even though they’re two legendary musicians, there’s no ego trip here – no one’s trying to upstage or outshine the other which is pretty rare, to be honest.

Most rock gods love the spotlight and that shows even in collaborations. But not here, not with Johnny Cash and Bob Dylan.

“After a while at that, I wrote Bob a letter telling him how much of a fan I was. He wrote back almost immediately, saying he’d been following my music since ‘I Walk the Line,’ and so we began a correspondence.” – Johnny Cash

Some say this isn’t their finest musical moment. Maybe, but keep in mind that they just went into the studio and jammed. Does it sound unrehearsed? It doesn’t matter, it’s still way better than most duets we’ve heard. It’s simple but incredibly beautiful.

David Bowie and Freddie Mercury – they’re both flamboyant, super extra and they know how to command attention and basically captivate the audience easily. When you think about it, so many things could go wrong. Not only will they try to upstage each other, their big personalities will make them want to stay in the spotlight.

And maybe they did try to outdo and outperform one another but, it was majestic all the same.

“It was hard, because you had four very precocious boys and David, who was precocious enough for all of us. David took over the song lyrically.” – Brian May

It’s hard not to like this. It’s catchy, fun and powerful. Still, this was a product of compromise because obviously, Freddie and David were used to doing it their way and since they don’t always see eye to eye on how things should be done, so they compromised. That’s how geniuses work.