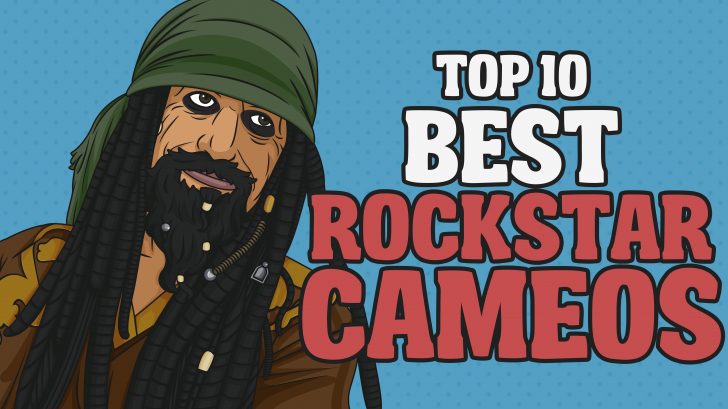 From stage to screen

Rockstars have a way of popping up in places you least expect, much less on movies and television shows. Unless it’s a talk show appearance, musicians having roles in movies as themselves or even as another character doesn’t really occur that frequently. So when they invade the movie or television world, it’s pretty bizarre and awesome to see! Let’s go through the best cameos made by your favorite rockstars:

Keith Richards – Pirates of the Caribbean

We all know that the famous central character in the Pirates of the Caribbean film franchise Captain Jack Sparrow is truly rock n’ roll. It wouldn’t be a surprise to reveal to its wide audience that Jack Sparrow’s heritage is also rock n’ roll, and what better way to show that than to cast a real life rock star in the form of none other than Keith Richards. Yes, the Rolling Stone lead guitarist makes a truly convincing rock star pirate as he has an uncanny resemblance with Jack Sparrow played by Johnny Depp. Richards was cast as Captain Jack Sparrow’s, father the infamous Captain Edward Teague. Funnily enough, before the series even became a worldwide blockbuster hit, Johnny Depp actually based his iconic character Jack Sparrow partly on Keith Richards. Because of that, Richards was approached to play Sparrow’s father for the second film but was unavailable at the time. He made his first appearance as Captain Teague on the third and fourth films.

If you’re an Alice Cooper fan, you’ve probably seen at least one of his many movie cameos in his career. Aside from his appearances on “Prince of Darkness”, “Sgt. Pepper’s Lonely Heart’s Club Band” and “Dark Shadows”, one of his most notable ones has to be in the 1992 film “Wayne’s World” wherein he gives a history lesson on Milwaukee. “Wayne’s World” was the second ever SNL movie to be made. If ever your kid or grand child needs a one minute crash course on the History of Milwaukee, just show them Alice Cooper’s short clip and they’ll be passing that pop quiz like a rock star. If not, we’ll say in unison “we’re not worthy!”

The Thin White Duke has graced the big screen various times in his very colored career in the arts – which includes both music and film. David Bowie has an impressive filmography to go with his extensive discography and he was a genius in both fields. The most memorable and most iconic of his cameo roles, however, was his strutting stint in 2001’s “Zoolander”. Bowie played himself in the cult classic comedy film starring Ben Stiller and Owen Wilson. In one of the most memorable scenes in the film, Bowie uttered the famous line “Maybe I can help” before proceeding to have a modelling “runway-off” with Stiller and he struts down while the name David Bowie flashes across the screen. It was truly one of the most epic theatrical moments in Bowie (and even Stiller’s) career.

Flea – Back to the Future II

Red Hot Chili Peppers bassist “Flea” has a pretty solid resume of film appearances and animation voice overs. The most notable one among them all, however, was his small role in the second and third Back to the Future films. The infamously wild bass player portrayed the character named Douglas J. Needles or simply “Needles”. If you’re confused as to where Flea was in the “Back to the Future II” movie, you’re not the only one as he was hard to recognize beneath the make up and prosthetic of an old man who was convincing the “future” Marty to say yes to some business deal. The more recognizable hyperactive Flea can be seen in “Back to the Future III” in a scene where he challenges Marty McFly to a drag race.

Phil Collins has always had that undeniable the charm. If you’ve watched his music videos, it’s sort of watching a small sitcom. Yes, he’s musical talent has gotten him writing and composing for big Hollywood films, but it’s also gotten him small roles and cameos that you might’ve missed. In fact, even the great Steven Spielberg took notice of his acting talent. In 1991, Phil Collins was cast in a small role in Spielberg’s adult Peter Pan adventure film “Hook”. Collins took on the role of an English police inspector investigating a disappearance. Collins was among a great call of actors including Dustin Hoffman as the titular character and even other musicians such as Jimmy Buffett and David Crosby. Sadly, the film didn’t live up to its hype and it was more of a disappointment than a blockbuster.

Dave Grohl is an animal on stage, having been part of iconic rock bands Nirvana and the Foo Fighters. He’s famous for being a talented drummer and a charismatic front man and that was put to the test when he faced Animal in an epic drum-off during his brief cameo on ABC’s The Muppets. The Foo Fighters front man finds himself going beat for beatin a “drun-derdrome” with Animal as both of them do their thing behind their own drum kits. Grohl extends his appearance as the drummer “Animool” in 2011’s “Muppet Movie”. He’s part of the rip-off band “The Moopets” and we see “Animal” and “Animool” go mad on the drums with the snares, cymbals, and toms flying around. It’s a pretty wild scene.

Did Jon Bon Jovi give war movies a bad name? In 2000 war film “U-571”, Jon Bon Jovi trades his sparkly rock star outfits for a uniform as he stars alongside Matthew McConaughey and Bill Paxton in this film about the World War II German submarine directed by Jonathan Mostow. Jon Bon Jovi only has a small supporting role, and *spoiler alert* things doesn’t really end well for his character. It’s not exactly one of those blink-and-you’ll-miss-it roles, but he just disappears half way into the film. Well, his character dies, tragically too. His death scene was sent to the cutting room floor but ow of the released deleted scenes would show that a big rock hits his character and decapitates him. Yikes, what a way to go huh. Nevertheless, whether he came out of the story dead or alive, the film actually was well-received by critics and audiences alike. It even won an Oscar for sound editing. Pretty sure Jon Bon Jovi had something to do with that.

Michael Jackson has had many cameos and even small roles in past films. (Remember the peculiar scarecrow from “The Wiz”? Yeah, that’s him). And maybe it was his wide array of cameos that caught the attention of director Barry Sonnenfield for the sequel of the widely famous sci-fi film “Men In Black 2” alongside Will Smith and Tommy Lee Jones. Have you seen that movie? Yup, MJ was briefly there. No, not as a space alien monster. The King of Pop played Agent M (M for “Michael Jackson”, no kidding) who is an agent of an organization associated with the Men in Black. It was a literal cameo as he was only seen in the film flashed on a video screen, sort of applying for the position of Agent M.

Before Ozzy Osbourne made a hit out of his family’s dysfunction in the reality TV show “The Osbournes”, he already had on screen experience fro this little known movie in the 90s called “Jerky Boys”. We say “little known” because really, not many people have seen this movie about a comedy duo who were being chased by the mafia because of a prank call going wrong. One of the greatest moments of this cult classic is when the Jerky Boys manage to sneak into a music club after they fooled a band manager into thinking they were part of the crew. And who might that band manager be, you may ask? Well, it’s none other than the Prince of Darkness himself, Ozzy Osbourne! The band Osbourne is supposed to be managing is Helmet and in the film, they are performing a cover of a cover of Black Sabbath’s “Symptom of the Universe”. How meta is that!

In 2014, His Purple Majesty appeared as himself on the Fox television comedy New Girl starring Zooey Deschanel. His amazing and surprising cameo was part of a post-Superbowl episode with the plot having Zooey Deschanel’s character and the show’s main cast ending up attending a party at Prince’s Los Angeles mansion. How did Prince came about just waltzing in comedy tv shows? Well, simply because he wanted to. He was a fan himself and wanted to be involved in moving the plot forward. Lucky Deschanel, who is also a singer, even got to sing alongside Prince in a rendition of FALLINLOVE2NITE!