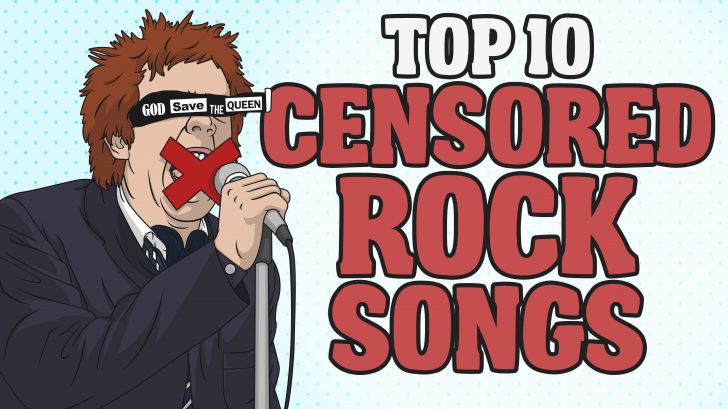 Did They Deserve It Or Not?

Back in the day, being censored wasn’t exactly something to be ashamed of. On the contrary, most rock artists wore it like a badge of honor. Come to think of it, what’s rock ‘n roll without challenging conventions and breaking rules? Then again, some of these are totally understandable but others, not so much. You see, there was a time when even toilets were taboo so no matter how seemingly innocent a track is, it can be unfairly censored.

There were artists who gave in and recorded an alternate version but for the rebellious, they simply didn’t give a *bleep*.

We can go on and on about how this was inspired by the artwork of John Lennon’s son but it’s really hard to deny that this somehow was about LSD.

9. Dire Straits – “Money for Nothing”

They probably knew what was going to happen when they included “faggot” in their lyrics.

Because of Roger Daltrey’s stuttering, the BBC reasoned that the song might offend those with stutter problems and also because the line “Why don’t you all fff… fade away!” sounds like it meant an expletive f-word.

It was only because of a single word – “joint.” So Tom Petty went back to the studio and recorded two alternate versions. First, instead of “Let’s roll another joint,” he changed it to “Let’s hit another joint.” Second, he reversed “joint” to “tnioj” which didn’t make any sense.

This one’s pretty funny – BBC were rather concerned with putting “Coca-Cola” in the lyrics and not so much with Lola’s biological sex. So, Ray Davies had to travel back to London in the middle of the band’s American tour to record it again but using “Cherry Cola” instead.

From the artwork cover to the lyrics, it’s no surprise why the BBC refused to even play this. There were even rumors that it only peaked at no. 2 on the official UK Singles Chart because it was ‘fixed’ so they won’t hit #1.

It was censored mainly because it promoted casual sex when AIDS posed as a huge health concern. Some banned it entirely while others played it using “love” instead of “sex.”

3. The Rolling Stones – “Let’s Spend the Night Together”

They weren’t censored by radio stations or BBC but by Ed Sullivan who told Mick Jagger to sing “Let’s spend some time together” instead of “Let’s spend the night together.” Jagger agreed but he rolled his eyes at the camera.

2. Charlie Daniels Band – “The Devil Went Down to Georgia”

Charlie Daniels already knew it would likely be censored or banned because of “son of a bitch” so he recorded a second version where it’s replaced with “son of a gun.”

It wasn’t simply censored but the song prompted an FBI investigation because some people believed the lyrics were obscene.