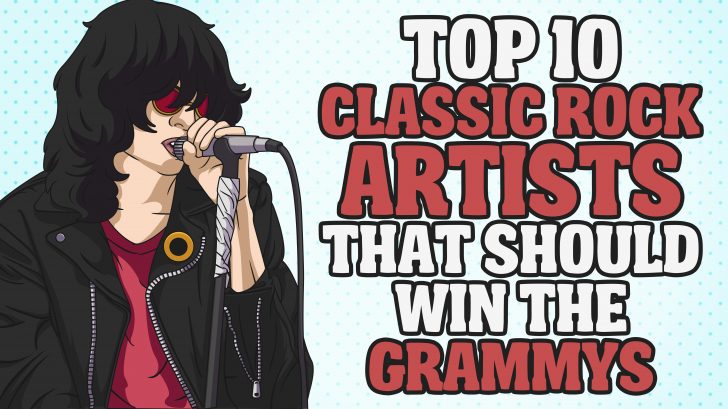 Some of these musicians are legends in their own rights and have sold millions worldwide, changed the pace of music as we know it, but never won any Grammy awards during their lifetimes. Here are the top 10 classic rock artists that should win the Grammys – and shockingly never won.

One of the most legendary frontmen for his work with the Smiths and solo career. He was nominated once, The Independent magazine once wrote in their paper, “Most pop stars have to be dead before they reach the iconic status [Morrissey] has reached.” Hey “GRAMMYs,” what the hell are you doing!?

The British Legends never won a Grammy, how the hell did that happened? These guys were behind “You Really Got Me,” and you overlooked them – not even a nomination!

Without the Ramones, there would be no “Black Flag. the Dead Kennedys, Bad Religion, or any other punk rock bands who came after.” And yet, where’s the GRAMMY (except for their Lifetime Achievement in 2011)?

The top best-selling bands worldwide, but no GRAMMYs to brag about it. But I guess, they have nothing to worry about because they have at least four American Music Awards, four MTV VMAs and a World Music Award.

Is it already safe to say that it’s time to stop believin’ that Journey will never ever get a GRAMMY?

Talk about influential rock acts, The Who are definitely one of the most. Despite having a huge footprint on the music scene, Grammys have kept them award-less.

This rock legend released four albums before passing away at the age of 27 from a heroin overdose. Don’t get confused the Grammys honored Janis Joplin with a postmortem Lifetime Achievement Award in 2005, (but nothing during her lifetime.)

“Bohemian Rhapsody” won a Guinness World Record and got inducted into the Grammy Hall of Fame, and that’s a Queen song. That said, Queen has never won an actual GRAMMY! WHAT THE F!? Is Grammy the next RNRHOF?

Of course, Lifetime Achievement Award and Grammy Hall of Fame, blah.. blah.. Led Zeppelin had nine studio albums and have ever won a freaking GRAMMY – even after 300 million units sold in the entire world!

This man has received several of Hall of Fame Grammy awards, including the Lifetime Achievement award, but the four albums he recorded during his lifetime, including one of the greatest albums of all time, “Are You Experienced,” never won a GRAMMY, not a single one! Isn’t this the greatest snub of all time?