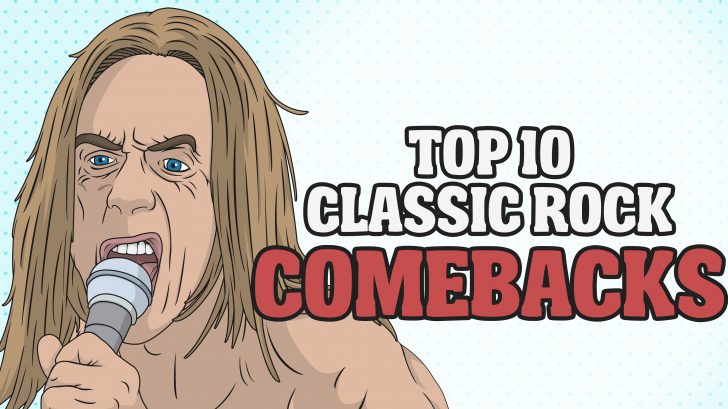 It’s All About Overcoming The Odds

From sickness to lack of creative direction and even death, these artists proved that some are lucky enough to have another shot at stardom. And they’re the ones that cross our mind when we think of the adage, “When you hit rock bottom, the only way to go is up.”

They’ve been through the worst but they managed to rise against it.

Their first breakup was in July 1971, then got back together the next year and disbanded for the second time in February 1974. Iggy Pop went on to pursue a successful solo career but eventually they worked as a band again and released new material over three decades after their last album. They continued touring until their final breakup on June 22, 2016.

The sudden death of their frontman and vocalist Bon Scott was a huge blow to AC/DC that they even considered quitting. But after some encouragement from Scott’s parents, they hired Brian Johnson to fill Scott’s shoes. Did Johnson deliver? As it turned out, their first album with him “Back in Black” was such a huge success with an estimated sales of 50 million copies!

Fleetwood Mac has had several lineups that it gets confusing sometimes. But we can’t deny that one of their greatest musical achievements was “Rumours.” When Lindsey Buckingham and Stevie Nicks left the group, they released the album “Time” which was a huge flop. They reunited two years later with “The Dance” which took them back to the top.

After he was kicked out from Black Sabbath, he spent the next few months in the company of drugs and alcohol. But future wife Sharon sobered him up and convinced him to start a new group. His band’s debut album was “Blizzard of Oz” which topped the charts and sold over 4 million copies in the US alone.

When they decided to remove their trademark makeup, it was pretty obvious KISS was struggling to find their identity and new creative direction. They also suffered the loss of a longtime member Eric Carr who died due to cerebral hemorrhage. Then they came up with their 1992 album “Revenge” which featured harder and heavier sound. And it was the best way to stage a comeback because the record debuted in the top 10 and even went gold.

After breaking into mainstream, the band experienced commercial decline. So after a glam metal makeover, their self-titled eighth studio album gave them their biggest success. They sold over five million copies in the US! The next albums “Bad Animals” and “Brigade” also took the top spots in the charts.

They were at the peak of their career in the mid-70s but addiction and conflicts caused their popularity to start going downhill and in the early ’80s, it didn’t seem like they were going to be able to duplicate their previous success. But their collaboration with hip-hop act Run DMC gave them an unlikely boost and just like that, they came back with a bang.

They were at their prime when tragedy struck the band. Some band members were killed including Ronnie Van Zant while others sustained serious injuries. They were on hiatus for almost a decade until they reunited for what was supposed to be a one-time tribute to the original member lineup. It eventually developed into a rebirth with their Last of the Street Survivors Farewell Tour starting on May 4 this year.

They were so huge in the rock world when they lost two members – Duane Allman and Berry Oakley who both died from motorcycle accidents on separate occasions. They decided to continue and it remains as one of the most stunning comebacks of all time. Their first album after the loss of two members is “Brothers and Sisters” which sold over a million copies in the US. The song “Ramblin’ Man” became their first and only top 10 single.

They were enjoying massive success before Bruce Dickinson left the band to pursue a solo career. Although he agreed to be part of the farewell tour, there were accusations that he was under-performing. In 1994, Blaze Bayley joined as their new singer but not everyone was digging it. The two albums he recorded with them, “The X Factor” and “Virtual XI” gave them their lowest chart positions. In 1999, Dickinson re-joined and it became the start of their spectacular rebirth.