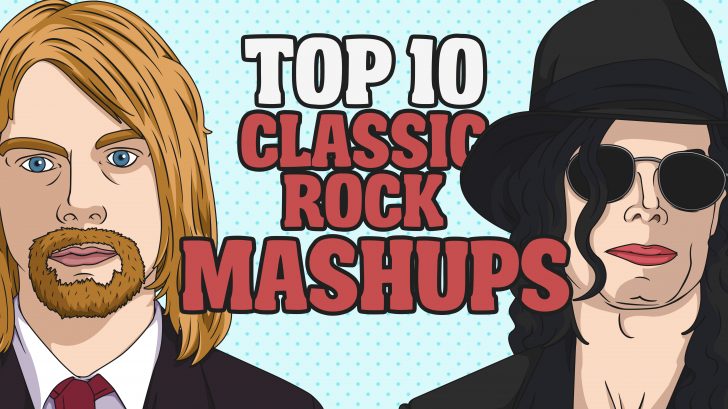 Imagine If These Bands Actually Did It In A Live Concert – Damn!

Mash-up is a remix created by blending two different existing songs, by either overlaying the vocal track of one song over the instrumental track of the other or by mixing up each fragment coming from both songs in a non-sequential method. In this article, we’ve set a list of top 10 mash-ups the internet has provided, and some of them are one of our favorite classic rock artists.

People on the internet can do anything. We all know who Mr. Rogers is, one of the most beloved children’s televisions host and he is mixing it up with Ted Nugent. – The Internet surely is awesome.

The Mr. “Beautiful Day in the Neighborhood” provides a soothing tone to the Motor City Madman’s 1977 smash “Cat Scratch Fever” – and it rocks!

9. “Smash Your Head” (Lil Wayne-Nirvana-Elton John And A Lot More)

I don’t know if you’re going to be happy about this one, (because it has Lil Wayne on it), but this mash-up is pretty darn hilarious.

8. “Sleep Rules Everything Around Me” (Fugazi-The Wu-Tang Clan)

The thing about this mash-up is Fugazi’s “I’m So Tired,” blends with “Cash Rules Everything Around Me,” Wu-Tang’s hit. Ian Mackaye’s whispered subs in the chorus kind of bring it everything together, making an awesome mash-up.

The maestro of Grunge meets up with the “King of Pop” in a mash-up. Nirvana’ well-known song, “Smells Like Teen Spirit” blended with Michael Jackson’s “Rockin’ Robin.” After hearing this one, it’ll get stuck in your head for awhile.

6. “The Boys are Back in Heaven” (Thin Lizzy-The Pixies)

We don’t know what came in the mind of the DJ who goes by the name of Phil RetroSpector, the one who created this mash-up. But he did something perfect “The Boys are Back in Heaven” features Lizzy frontman Phil Lynott’s vocals from “The Boys Re Back In Town” blended on top of “This Monkey’s Gone To Heaven,” Pixies classic.

5. “Sweet Dreams are Made of Seven Nation Army” (The Eurythmics-The White Stripes)

These two songs definitely fit together perfectly, and the editing is absolutely crazy. This mash-up can be inspiring for those who want to create their own mash-ups.

Bob Seger’s “Turn the Page” and Foreigner’s “Juke Box Hero” is somewhat an inspirational mash-up, it combines very similar stories, where a kid dreams of rock stardom (and the sweet Foreigner’s bassline) with Seger’s story about how lonely the road to the top if you really want to rock n’ roll. Mixing it The Door’s “Riders on the Storm” make it more perfect, – definitely, one of the greatest mash-ups ever created.

Someone overdid it with mashing-up Blondie’s 1980’s hit “Rapture” to The Doors “Riders on the Storm,” but it kind of seems a perfect fit. Jim Morrison’s vocals with this one put a haunting theme to the disco beat.

Two of the most iconic bands of the late 70s. “Pink Floyd” and the “Bee Gees” are both legends in their respective genres. After hearing this mash-up, you will definitely be mesmerized – “Another Brick in the Wall (Part 2),” from their 1979 album “The Wall” perfectly blends with Bee Gees disco hit “Stayin’ Alive.”

If creating a great classic rock mash-ups, why not do it with one of the legendary bands of all time, “Led Zepellin” and “Black Sabbath.”

You just know something crazy is about to happen the first time hearing Jimmy Page’s ‘Whole Lotta Love’ riff is merging on Tony’s Iommi’s ‘War Pigs.’ While the “Prince of Darkness” is having a duet with the legend, taking parts of the verses and “Robert Plant” on the chorus, making the mash-up a perfect combination of war and love.