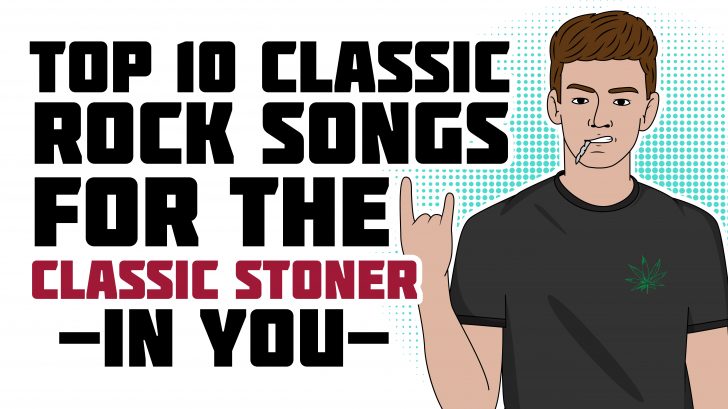 Good music is good music whether you’re sober or high. But let’s face it, being stoned takes the whole experience to another level. It’s the kind of rollercoaster ride that could make you feel things and maybe even give you a glimpse into the creative mind of the artist.

And it goes without saying that a popular theme in rock ‘n roll is drugs so… Whatever your trip is, we guarantee these are the best tunes to listen to. Besides, you don’t have to wait for 4/20 to plug them in and put your volume on max. Even your non-stoner neighbors will most likely enjoy this too.

For the record, the song itself is highly addicting. So chances are, even if you’re sober and all, it’s going to feel like your stumbling into a haze maze. It sounds so good and it’s seriously one of the best rock tunes ever made. With all those feel-good vibes, your stoned self will most likely keep on smiling the whole day.

“All Right Now” is Free’s signature song and we totally understand why. It’s a great listen if you’re feeling high or going there.

There’s nothing flashy or mind-blowing about it but it’s so dang memorable. And it’s best played after a long day, you know, while you’re relaxing and having a drink.

If some songs beat around the bush that it’s about weed or whatever, Tom Petty doesn’t especially when he sings “But let me get to the point, let’s roll another joint.” Talk about being straightforward. So basically, there’s no guessing game happening here. We know what the track’s about and well, there’s no way you cannot like it even if you’re feeling somber or the happy kind of high.

We also love how it sounds so rebellious and defiant – typical Tom Petty stuff.

“The strangest thing happened. I wrote this song not thinking that it was controversial in any way and I nearly left this song off the album ’til the very end, and we put it on. Imagine my surprise when this song comes on television and they say, ‘Let’s roll another noojh,’ which sounded worse to me than joint. Because, I don’t know if you’ve ever had a noojh, but it sounds really wicked.” – Tom Petty

Once upon a time, the song was censored by both MTV and radio stations and they either traded the word ‘roll’ with ‘hit’ or ‘joint’ was played backwards. Yup, it only made the whole track sound weird.

8. Brewer and Shipley – “One Toke Over The Line”

How high do you have to be to mention marijuana and Jesus in the same breath? Sadly though, this is the only hit from the American folk rock duo Brewer & Shipley. Then again, who needs a lot of songs in your catalog if you already have one that will cement your name in the rock ‘n roll pantheon and basically immortalize you in the music world.

Besides, stoners are constant in every era, every decade. So well, they have an audience in every generation.

“When we wrote ‘One Toke Over the Line,’ I think we were one toke over the line. I considered marijuana a sort of a sacrament… If you listen to the lyrics of that song, ‘one toke’ was just a metaphor. It’s a song about excess. Too much of anything will probably kill you.” – Tom Shipley

You gotta love Tom Shipley’s explanation because at the end of the day, it will always be a staple in every stoner’s playlist. You just can boot this one out.

We can almost hear the collective “Yeah!” of all the stoners reading this list. This is probably the song you’ve been waiting for, LOL. You see, if you love this epic track from Rush, you’re either a stoner or you have impeccable taste in music. Or more likely, you’re both.

You can ask anyone but most of their songs are actually stoner-approved. And so, if “Tom Sawyer” doesn’t strike your fancy, you can choose any of their other tunes.

“Tom Sawyer was a collaboration between myself and Pye Dubois, an excellent lyricist who wrote the lyrics for Max Webster. His original lyrics were kind of a portrait of a modern day rebel, a free-spirited individualist striding through the world wide-eyed and purposeful. I added the themes of reconciling the boy and man in myself, and the difference between what people are and what others perceive them to be – namely me I guess.” – Neil Peart

Everything is absolute perfection. If by any chance, you haven’t listened to Rush yet, this is guaranteed to hook you. From the bass line to the guitar solo and drumming, it’s a wild, wild ride if you’re high. It’s also great if you’re out on a road trip and you need something to make you feel ‘the moment.’

Everyone has probably gotten high or drunk while listening to this classic. It’s fun, feel-good and just pyschedelic. They may have other better songs but hey, this right here is stoner-approved. It sounds eerily beautiful and it showcased Jim Morrison’s mesmerizing vocals.

Anyone who’s not yet a fan of The Doors only needs to listen to this. It’s guaranteed to win them over.

“It’s like I’d saved up all [these ideas] in my mind and got them out all at once… Jim had this idea of the band being a shooting star.” – Robby Krieger

Well we all know Jim’s wild and crazy antics so there’s that. Besides, it has psychedelia written all over it. It doesn’t matter if you’re actually stoned or just want that ‘high’ feeling. Although to be fair, some find this an ‘acquired taste.’ There are those who find it horrible at first but eventually come to love it.

Subtlety isn’t one of Ozzy Osbourne’s strongest suits so basically you can tell from the title alone what he’s referring to. Obviously, Ozzy and the rest of the band were into drugs at the time and no, it’s not just weed. And we wonder how high they were when they wrote the line, “I love you sweet leaf, though you can’t hear.”

Yup, that’s the kind of stuff you only say when you’re stoned.

“To be honest with you, I will think to myself, ‘What the fuck was wrong with me when I thought a good night was getting a belly full of booze and bag of fucking cocaine?’ You’re sitting in a fucking hotel room, jacked to the gills and the sun is rising and you’ve got to do a gig that day. It’s fucking dreadful.” – Ozzy Osbourne

And of course, the track starts out with Tony Iommi coughing after you know, smoking a joint with Ozzy. Because really now, why the heck not?

This pretty much describes every stoner’s state of mind – dazed and absolutely confused. Besides, Jimmy Page and his guitar solo with likely leave you in awe. It’s psychedelic so you know what that means. And the best part here is, when they played this live, they would often extend it to 45 minutes.

“The Yardbirds never sounded so otherworldly. The song lasted close to fifteen minutes. This was a tour de force for Page’s bowing in the show—a song no one had ever heard before, ‘I’m Confused.’ It was dramatic and scary … an eerie, menacing guitar solo by Page that droned forth from his bow and then exploded into a furious lead.” – Biographers Ralph Hulett and Jerry Prochnicky

It’s spooky but beautiful all the same. If you’re stoned, you already understand how that feels like. It elevates the whole music experience to another level and well, it might make you feel as though you’ve just been transported to another dimension.

People say this is one of his worst songs but we beg to disagree. It’s certainly not his best, that’s a given, but it’s a must-add for every stoner playlist. Besides, Bob Dylan doesn’t shy away from giving us advice when he sings, “Everybody must get stoned.”

Yes sure, Bob. And then he proceeds to singing ‘stone’ a couple more times because you know, he’s a rebel like that. And in all likelihood, everyone in the studio was probably stoned during recording too.

“I have never and never will write a drug song… These are people that aren’t familiar with the Book of Acts.” – Bob Dylan

So okay, maybe just maybe it’s not about doing drugs or really getting stoned. But we’re really not buying this whole biblical meaning thing. Others believe it’s about trials – it’s possible. Still, it’s hard to deny with his now-famous line, every stoner just felt like they found the soundtrack of their lives.

Pink Floyd and their wild, vivid imagery with all those bright colors – how can we not include them on this list? You can choose this or “Comfortably Numb” or even “Shine On You Crazy Diamond.” Either way, it’s some good stuff every stoner will approve of.

What’s there not to like about this? It’s an epic masterpiece that proved they were way ahead of their time. And like other tracks in their catalog, this has an otherworldly feel to it.

“I for one would have to say that it is my favourite album, the Wish You Were Here album. The end result of all that, whatever it was, definitely has left me an album I can live with very very happily. I like it very much.” – David Gilmour

This is the very definition of ‘hauntingly beautiful’ and there’s that feeling as if everything’s unreal. It will make you want to just stare into space for a few minutes. There’s nothing quite like it.

The inner stoner in you will wish you were as creative and brilliant as Jimi Hendrix when high. The man practically created one of his most popular and enduring songs from his ‘dream.’ He denied it was about drugs but we still think it’s the ultimate psychedelic track.

You can understand the dream-like imagery though. Besides, when you’re high and all, it’s as if you can actually see all the colors that Jimi saw which is like taking a peek into his mind.

“I dream a lot and I put my dreams down as songs. I wrote one called ‘First Look Around the Corner’ and another called ‘The Purple Haze,’ which was about a dream I had that I was walking under the sea.” – Jimi Hendrix

Admit it, just listening to this is enough to make you want to get high and see that ‘purple haze’ Jimi is singing about. It just can’t get any more psychedelic than this.