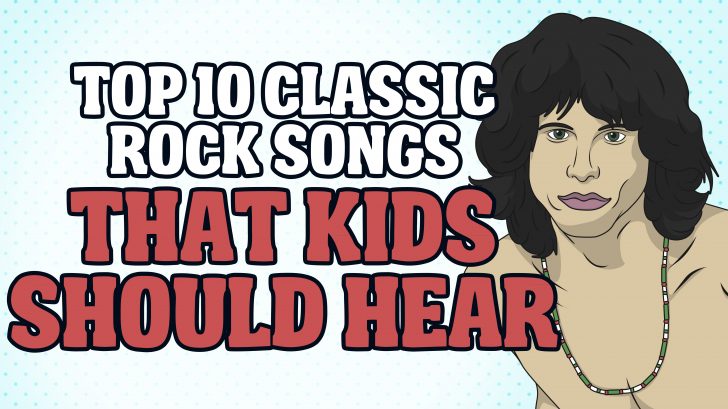 Classic Rock Will Always Be Better Than ANY Kind Of Music

Sad to say that us parents are now relatively old, as for our love to classic rock our children grew up with our music, listening to our favorites. So your children as a classic rock kid will embrace the things we love, while other kids listen to soulless music in today’s scene.

Looking at it now, we as parents should influence them more for giving them the greatest gift of all – REAL MUSIC.

In a world filled with soulless music from the dust every week, auto-tuned one hit wonders and retards lip-synched performances nothing compares to the real deal, the things we grew up listening to – CLASSIC ROCK.

And all that being said, these are the top 10 classic rock songs that YOUR kids should hear!

The opening lines of this song, “Jeremiah was a bullfrog, was a good friend of mine. Never understood a single word he said, but I helped him drink his wine,”  You might get your kids confused by this song, the title seems like alike to the Christmas song “Joy To The World” but it’s not.

The one who wrote this piece is “Hoyt Axton” for an animated TV special called “The Happy Song,” but somehow it never materialized during those times. Axton is a well-known country singer-songwriter from Oklahoma. “Joy To The World” was pitched to Three Dog Night when Axton opened for them during a tour.

If you are a bible man who happens to love classic rock, this song is a perfect fit for you to share with your kids. Axton’s bullfrog in the song interpreted as prophet Jeremiah from the Bible, and a sermon that somehow connects the case that the song represents God’s desire to unite humanity in happiness.

9. “Roadhouse Blues” by The Doors

Written by Jim Morrison who happens to get drunk too often. He liked to sing blues every time he gets drunk, and he came up with this at one of those inebriated sessions.

A perfect blues song to introduce to your kids, folks.  Every time they will hear it, it’s like the first time all over again. Your kids would really enjoy this song especially the incoherent mumbling in the middle.  It’s fun and cool at the same time that the song can fit anywhere anytime. Even today’s music can’t get near this level. They can play it whenever they wanted to, wherever they are.

Kids should really hear this perfection! Not only a great song but the best musical achievement of the Zeps! The greatest band on earth! The chills you get on this song is something you will never have on today’s music.

A wonder and a kind of envy too of why musicians such as Zeps who composed this song was able to come up with something like this! It’s very rare and decent, let alone beautiful. So kids, when you hear a song like this you should be honored. The musicians who wrote it are not just your typical rock n’ roll band. They are Legends! Kashmir is the best rock song of the best band EVER, nuff said kids.

A song that represents teenagers everywhere so well! It’s very awesome and angsty!  A song by one the greatest bands of all-time, The Who, – it also has the best bass solo of all time. Not only that the song is great – had the most meaningful lyrics that represented the sentiment of the time period that it was released.

Kids, you were definitely born in the wrong generation. A song like this made during that era will never die, it’s from the 60’s and it’s still true than blue! Remember kids, songs like this should never be played or sung by anyone else–unless they’re just singing along with the original singer or artist!

So are your kids looking for some sort of a song that gives a statement about doing their own thing without letting others bring them down? Here it is! Let them damn kids have it! Let them have it all! Let them get infected by the bass line and the sneering lyrics, let them be cracked up!

This song right here will be one of those reasons why your kids will get into classic rock! They will be mesmerized in a sec! The riff sounds so awesome and powerful, and it defines what rock music is and always should be.

5. “Me and Bobby McGee” by Janis Joplin

So today’s singers cannot actually sing if they don’t use autotunes? Why still bother listening to them if you can always listen to Janis Joplin!

With Janis Joplin, you can have one of the best bluesy rock n’ roll songs of all time. Her words can be quite easy to visualize. So incredibly beautiful, it makes you realize that the world is really lost when a musician such as Janis Joplin died. She was very bright and makes you feel so happy and this song sets you free. Kids, if you are looking for the best song this one right here is one of them. Best song to along and mellow out.

One of the most prolific songs ever written. It symbolizes the parenthood, teach your children your values, and at the same time you should also learn from their values and move forward as one family. Nothing is greater than that and nothing is much greater than influencing your children to get into classic rock. “Teach Your Children” is a good start.

Kids will learn the really important things in life with this song, that life is often through trials, pain, misery, and regret.

Unlike other classic rock songs, Tom Petty’s songs actually tell a story.  One of those songs that makes you feel free, and it kinda reminds you of great memories.

This song will definitely remind your kids that being a “Bad Boy” will lead to nothing. Trying to fit in with the bad boys, won’t get you any girls. Drugs and booze won’t get you to anything. Just listen to classic rock, and will get you high enough. Start with this one.

2. “Stairway to Heaven” by Led Zeppelin

Why kids should hear “Stairway to Heaven?” Well, first of all, this song is strongly real, both forwards and backward and that makes the song so very inspiring.

The progression of the song is absolutely brilliant that since the beginning people have been searching for answers about the hidden subliminal messages in the song.  The song gives you the feeling of gradual crescendos, and that is the best feeling in the world. The greatest song ever recorded. You kids will definitely appreciate the song when hearing it every time whenever you get the chance. Something you have never hear in your lifetime. A song that is actually constructed as a stairway, it rises its intensity as it goes. Greatest ever! PERIOD!

Perfect songs for teenagers! They will definitely relate to these songs in a way. Most of us went to a school as troubled teens. Most teachers were more interested in keeping us in line rather than actually TEACHING anything.

But hey, kids, don’t confuse yourself that these songs are ANTI-education. It’s definitely PRO! You will love every minute of it, so meaningful by ruling out the education that forces children to lose their very individuality and build a wall around themselves.