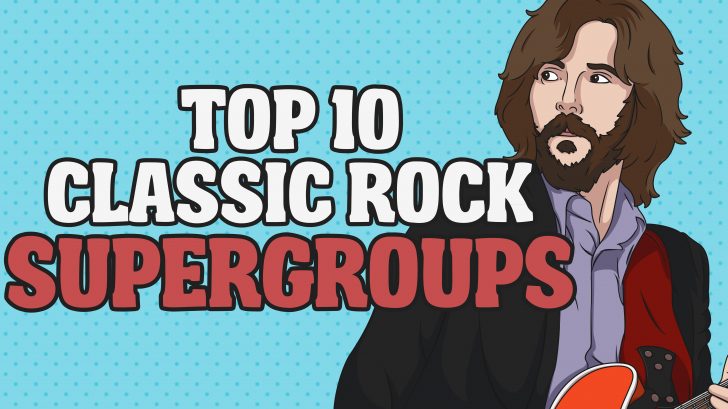 A supergroup is a rare and fragile yet epically amazing phenomenon in the world of rock n’ roll. Supergroups are formed when members of different legendary existing bands decide to gather together and form another band of their own. They don’t usually last a long time, with big talents and even bigger egos clash together, a fall-out is usually inevitable. But when they do form, wonderful material is created, and fans of the various bands they played for prior, also unite. Forming of supergroups is an ongoing thing. The very best ones when successful members of different groups join forces and make iconic music.

Here are the Top 10 Classic Rock Supergroups ever formed:

Formed in 2001, this four-piece supergroup was basically a combination of Soundgarden and Rage Against the Machine. However, by the band’s sophomore output Out of Exile, the group formed a completely new sound and identity. The supergroup lasted for six years, released three albums, and received three Grammy nominations. They also sold more than 8 million albums worldwide. They disbanded in 2007 but reunited 10 years after in January 2017 and performed at Prophets of Rage’s Anti-Inaugural Ball. Just five months after their reunion, Chris Cornell was found dead in his hotel room in Detroit, at the age of 52.

This outlaw country-rock music supergroup was formed by four of the biggest names in the genre. The band was active for a decade from 1985 to 1995 and recorded three major label albums with Columbia Records and Liberty Records. The supergroup also released three chart-topping singles including “Highwayman” which reached number one in 1985. Nelson, Kristofferson, Cash, and Jennings also voiced the Louis L’Amour Collection, a four-CD box set of seven Louis L’Amour stories published by the HighBridge Company, although the four were credited individually and not as “The Highwaymen”. The four-some also starred in a movie together: the 1986 film, Stagecoach.

The Dirty Mac was only a one-time supergroup that John Lennon put together for the TV special The Rolling Stones Rock and Roll Circus. The TV performance was also the first time since the formation of the Beatles that Lennon had performed sans the Fab Four. In the special, it was shown that Lennon was chatting with the Rolling Stones’ Mick Jagger before going on to perform. Lennon also weirdy introduced himself “Winston Leg-Thigh” but introduced the rest of the supergroup by their real names.

The Dirty Mac also recorded a version of the Beatles’ song “Yer Blues”, which Lennon himself had written. They were also the backing band for Yoko Ono and violinist Ivry Gitlis on the track “Whole Lotta Yoko”.

7. Temple of the Dog

This supergroup was formed in 1990 in Seattle, Washington as a one-off tribute to Andrew Wood, lead singer of Mother Love Bone and Malfunkshun, who had died from a heroin overdose.

The band became a grunge classic group and went on tour in 2016 in celebration of the 25th anniversary of their self-titled album.

This supergroup was stacked full of musical legends! When Bob Dylan, Tom Petty, George Harrison, Jeff Lynne and Roy Orbison got together, fans almost lost their minds by the historic banding-together. The four musicians joined their insane talents together to create two remarkable albums:  the first one released in 1988 and the second in 1990, though Roy Orbison died of a heart attack before the second album was recorded.

Blind Faith was considered as one of the first ever supergroups created (second to Cream). It is said that this group helped pioneer the of blues/rock fusion. They released only one album, their eponymous Blind Faith in August 1969. The public and media deemed the band as “super Cream” with their stylistic sound very similar to that of Clapton’s first supergroup Cream. After just one tour, Clapton feared that the band was only sub-par and got weary of the supergroup life.

Them Crooked Vultures is probably considered the biggest alt-rock supergroup of all time, with three of the most popular names in the alt-rock genre joining forces to create hard-rocking songs that are hard to forget. The supergroup released a self-titled debut album in 2009 and toured all over the world through 2010. With Grohl busy with the Foo Fighters and the rest of the boys also busy with their own things, there’s no word yet of this supergroup getting back together on stage or in the studio.

This folk rock supergroup started out as Crosby, Stills & Nash (CSN) before legendary artist Neil Young joined in and the group occasionally became Crosby, Stills, Nash, & Young (CSNY). This vocal supergroup is harmony paradise with their voices perfectly merging with each others’ as evident in their signature hits “Ohio”, “Teach Your Children”, “Carry On”, and “Deja Vu”. However, no matter how perfect their voices blend, personality clashes behind the scenes had pushed them towards splitting up in 2015, just three years away from their 50th anniversary.

2. Derek and the Dominoes

Derek and the Dominos was the third ever supergroup formed by Eric Clapton with keyboardist Bobby Whitlock, bassist Carl Radle, and drummer Jim Gordon in 1970. All four members of the supergroup were also previous members of the band Delaney & Bonnie and Friends.  The Beatles’ George Harrison also guested and provided vocals. Derek and the Dominoes only released one record, the highly acclaimed and now iconic Layla and Other Assorted Love Songs which spawned the band’s most popular track “Layla” (a song Clapton wrote about his relationship with George Harrison’s wife Pattie Boyd, whom he eventually snatched from Harrison and married but divorced not long after).

Considered as the first ever supergroup, pioneering the creation of such musical groups to come, Cream set a new standard for blues and rock in the history of rock n’ roll with their 1966 debut album Fresh Cream.

The rock power trio sold more than 15 million records worldwide and released chart-topping iconic singles such as “Crossroads”, “Sunshine of Your Love”, “White Room”, and “Spoonful” to name a few.