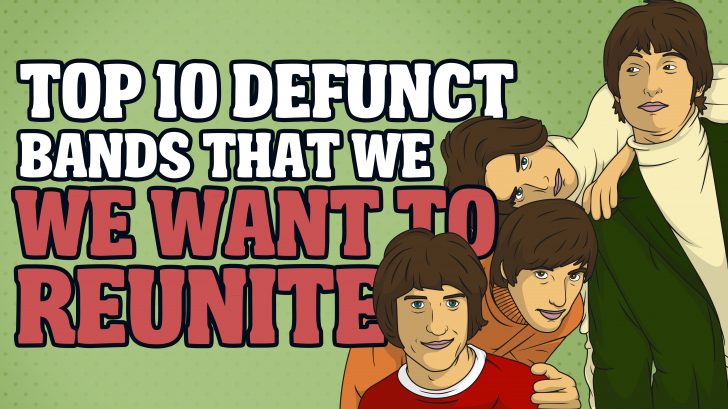 We often find ourselves reminiscing about the greatness of the past, the overwhelming feeling of nostalgia for the days when music was what we considered real music – these were the times when musicians had real talents and possessed God-like skills, but more and more of those bands and artists we grew up with have parted ways for various reasons. It somehow broke our hearts about them, so here’s a list of our favorite defunct bands and artists who we’d love to see to hit the road again and make a comeback.

The Kinks ended it up in the mid-90’s, but still, they are one those classic rock greats that fans still hold out hope of seeing them reunite again someday.

Though it might seem pretty impossible because brothers Ray and Dave Davies, have been involved in a feud for ages, and they still haven’t fully put their differences aside.

But yet again, fans were shocked when Ray Davies walked out on stage during his brother Dave’s gig at the Islington Assembly Hall in London last December 2015. He spoke a few words and sang their first hit in 1964 “You Really Got Me,” with his brother’s band.

So as of now, we are still in the hopes of The Kinks reuniting.

David Byrne seems to acknowledge the “bad blood” between himself and his former band members in the past. Insisting that their creative differences have been the very reason why they made a breakup necessary. Though, their bassist Tina Weymouth called out Byrne as “a man incapable of returning friendship.”

As much as we would love to see this reunion happening, it’s hard to imagine that Talking Heads would settle to recreate their past glories.

The odds that the reunion would be possible to happen is not that good. Though rumors have circulated for years, keyboardist Jerry Harrison and drummer Chris Franz quickly denied all those tales saying, “It should be happening but David is holding out.”

8. Rage Against the Machine

With all these political and social dispute, this year is a perfect fit for Rage Against the Machine to reunite again, and it’s kind of a sign for them to make the reunion possible.

Prophets of Rage have been doing their part to keep the flame burning into the system, but what the world really needs to see is  Zack de la Rocha onstage performing with his former bandmates.

After brief reunions in 2007 and again in 2011, it seems like Rage Against the Machine would never see a day like those happening again.

Nearly 50 years after the legends from Birmingham, England formed Black Sabbath. It’s hard to imagine a world without Black Sabbath, and it’s something that we would likely accept. They played their final show of the farewell tour last February 2017.

The band could have been celebrating their 50th anniversary this year, and yet they called it a career just a one year shy of the half-century mark of rocking the world out.

It’s understandable why Tony Iommi wanted to close the book, but are we really asking that much? They can still put on a show, and maybe they could crank out some new jams. And why the hell they didn’t reunite with Bill Ward when we wanted them to.

Pantera reuniting would definitely be a great idea. The band called it quits in 2003 and the chance of a reunion happening was tragically crushed when guitarist Dimebag Darrell was murder on stage in Columbus, Ohio on December 8, 2004.

Of all the reunions we would like to see happening, Pantera might be the least likely of all of them happening.  The idea of a Dimebag-less reunion has been coming up over the years, and Black Label Society’s Zakk Wylde has been potentially viewed as Darell’s replacement if a reunion could possibly take place.

But come to think of it, this kind of Pantera reunion would just be too weird. Pantera was always and has been Anselmo, Dimebag, Brown, and Paul, and making a new line up would just seem not-so-ingenuous.

Sex Pistols reuniting seems to be just a dream within a dream as they hate each other too much. Though rumors have been circulating that the band could have returned to celebrate their 40th anniversary of the release of “Never Mind The Bollocks” album last year and it’s unlikely happening this 2018.

But the idea would be awesome, with political disputes reaching a higher intensity, the Sex Pistols could provide a couple of middle fingers and astounding four-letter words that will remind all of us what Rock N’ Roll used to be!

Tom Keifer has once again ruled out the possibility of a Cinderella reunion, saying the “disputes” between the band members are “beyond repair.” Though many of them are still active today.

Cinderella will be forever considered one of the greatest Hardrock bands of all time, something is better than nothing at all, we can always look on the bright side as a fan that Tom Keifer is still out there and keeps continuing to release more solo albums, but in the future, if they could make a reunion possible it would be cool and wonderful!

Three members of the band were due to reunite for a series of gigs this summer, but it somehow fell apart as soon as they were announced.

Mike Joyce and Craig Gannon really tried to make it possible, but Andy Rourke, the former bassist with The Smiths, has denied his involvement in the said partial reunion of the band that is planned for this year’s summer. He called the announcement as “false statements”, adding up: “At no time did I give my consent for anyone in connection with this Classically Smiths project to act on my behalf or my name, and nothing was ever confirmed, approved or contracted by me or my team.”

What so pure about the Smiths’ refusal at getting back together?

“I would rather eat my own testicles than reform the Smiths.” – “VEGAN” Morrissey

There’s a possibility that the band is getting back together, according to one the four members even the fact that Graham Nash has held some resentment towards David Crosby during the past years.

The reunion seemed like it was off the table, but Nash has spoken and given us hope on the possibility of a band reunion.

Setting their personal differences could be one of the major things that could reunite the four. Plus their hatred for the current administration and the U.S. political climate could set them in doing some new records. However, they still have to talk to each other first.

A Led Zeppelin reunion will never ever become a true reunion with the fact that John Bonham is now resting in peace, but wait, Jason Bonham is basically John Bonham. –  Oh, I guess I exaggerated the statement a bit. No one is John Bonham, and no one will ever be!

But legend says that they should do a reunion tour because of a reason that they are in fact a LEGEND, this is the most important reason. Not every one soul could have possibly not known that fact. It’s Led Zeppelin, the greatest rock band in the world, even Gods will see them if they reunited just one last time.