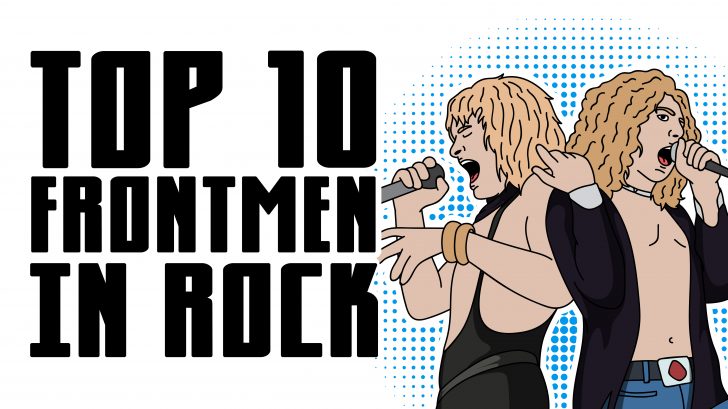 What makes a great frontman? Is it the stage presence? Charisma? Showmanship? Serious vocal chops? Or is it the whole package? They can drive the crowd crazy or silence them when they want to. And they basically propel their performance to the next level – from mediocre to legendary.

They get you excited, exhilarated and emotional. They make you feel things, basically. As a band, you can have the greatest songs in your catalog or the best musicians but without a great frontman, you won’t make a mark. In rock ‘n roll, there’s no shortage of talented and engaging frontmen and it pains us to boot some of our favorites on this list.

Ladies and gentlemen, we present to you the top 10 frontmen in the history of rock.

Ozzy Osbourne was many things but he was far from your average frontman. After being booted out of Black Sabbath, he managed to carve a successful solo career. And well, he even had his own reality show The Osbournes which was a huge hit and only made Ozzy more popular.

But what is it about him that captivates the crowd? The guy pulls out all the stops to make a great show. And apparently, there’s no such thing as too much for him. Remember the time he infamously bit off the ear of a live bat? Yup.

“I’d have to say the Beatles. They turned me on to wanting to be a rock & roll performer. And I like Mick Jagger as a frontman. We all owe him a certain amount of respect. He can still do it in his seventies.” – Ozzy Osbourne

He’s all sorts of crazy and we love him for it. And there’s nothing he won’t do to keep the audience entertained. What’s not to like about that?

Maybe we can all agree that Dave Grohl is one of the coolest and nicest rockstars of all time. He’s a great drummer and musician but what endears him most to his audience is his attitude. Remember the time he offered a glass of beer to a fan?

And he goes all out everytime – whether it’s performing at a children’s TV show or beside Paul McCartney and Stevie Nicks.

“He used to get stage fright, really uptight, before a show. But you never see that. He doesn’t pace around backstage, worrying.” – Foo Fighters producer Butch Vig on Dave Grohl

He broke his leg mid-performance and still managed to finish the show. And somehow, he also figured out how to continue with their concerts (after canceling some tour dates) without looking lame. So in typical rockstar fashion, he performed while sitting on his giant throne decorated with guitar necks. He even let Axl Rose borrow it. That’s a great frontman for you, the show must always go on.

Diamond Dave knows how to put on a memorable show. From high flying kicks to splits in the air and leaps, he’s a total performer. It makes us think that he moonlights as a stunt man. But, martial arts is actually a big deal for him.

And on stage, it was him and his trademark moves. If you’re a cameraman, you should know better than to stay close to the guy. Well unless you fancy a swift kick in the face.

“I started my first martial-arts lesson on my 12th birthday up here at the Buddhist temple on Raymond Avenue in Pasadena. To this day, Monday, Wednesday and Friday at 7 in the morning, I train in Brazilian jujitsu … Two nights a week, I have a kendo instructor come here, who’s in his 60s, and I have a kendo hall that I built in my house here.” – David Lee Roth

There’s even a video compilation of him and his kicks. But more than those stunts, he’s charismatic and he knew how to command everyone’s attention. In fact, he obviously mastered it. He gets you pumped up. How many can do that? It’s like he has this endless supply of energy to keep him running around and doing his thing.

Apart from being a commercial airline pilot, competing at fencing and creating his own beer, Bruce Dickinson also happens to be one of the greatest frontmen and vocalists in heavy metal. That voice is something else – and we don’t know what deal he made with the devil but it still sounds so darn good even after all these years.

“You’re the lead singer of Iron Maiden, and you’re going to be arrogant every now and again, because it kind of goes with the territory, yeah.” – Bruce Dickinson

He’s known for his operatic voice but more than that, his stage presence is incredible. He sounds good on recording but when you see him live, nothing compares. No one can out-sing and out-perform the guy. There’s a reason why he remains peerless up to this day.

Also, he makes life hard for other metal vocalists because really now, he became the standard to which all others are measured.

Roger Daltrey remains criminally underrated as a frontman. He has to keep up with Pete Townshend, Keith Moon and John Entwistle – and it’s safe to assume that isn’t the easiest job to do. Pete and Keith always had their wild and crazy antics – smashing guitars and setting off explosives.

But somehow, Roger Daltrey still has enough charisma to make himself the center of attention despite all that.

“I want us to stop at the top of our game when we are still really good at what we do. The quality of the music is really what this is all about.” – Roger Daltrey

He’s one of the few who can effortlessly put the audience in a trance – torn between awe and excitement. And his voice – where do we even begin? He can go from low to high notes and pretty much anything and everything in between and still pull it off flawlessly.

Sure, dude looks like a lady but we’d be lying if we say he doesn’t make us feel things. His distinctive voice and range – that alone could have landed him on this list but he’s a massively talented entertainer too. Stage presence? Check. Charisma? Check. Sexual prowess? Check.

He’s probably the only one whose screams make you choke up. There’s so much emotion in his singing and he can go from hard rock to power ballad and slay it every single time. At his peak, he could easily outperform everyone. Even today, at 69, he can put younger musicians to shame.

He’s a beast on stage and he makes singing those insanely high notes seem easy. He’s amazing live and it’s a plus that he’s a cool guy too.

Love him or hate him, Axl Rose is an excellent frontman. In between ranting about random stuff and calling out fans for wearing a Slash tshirt, he’s pretty talented in the vocal department too. Besides, with his snake dance moves and big ego, he’s bad ass and intense on stage.

He’s highly unpredictable and that’s what keeps the crowd on their feet – wondering what the heck he’s up to next.

“A majority of what’s in the press is negative. But I think that we’re also gaining more fans, people of all different ages that really like what we’re doing. There’s a really good vibe in the crowd, a warm vibe.” – Axl Rose

He’s wild, honest and unapologetic – all the things we love about rock ‘n roll. And take note, he can pull off wearing spandex, tight leather pants and plaid skirt and still look sexy. In his prime, he’s unstoppable. Oh and let’s not forget that he temporarily fronted AC/DC, another legendary band. That’s quite an accomplishment to be honest.

Mick Jagger may not be the best vocalist in rock but he certainly raised the bar for every other frontman. When he’s on stage, he owns it and always manages to snag the spotlight with every performance. He’s got the confidence and charisma to outshine whoever he’s with.

He knows how to weave magic on the audience. And incredibly so, he still has the energy he possessed in his 20s.

“I certainly don’t want to go on stage and just stand there like Scott Walker and be ever so pretentious. I can’t hardly sing, you know what I mean? I’m no Tom Jones and I couldn’t give a fuck. The whole thing is a performance of a very basic nature, it’s exciting and that’s what it should be.” – Mick Jagger

Mick’s performance is anything but boring. Even in his 70s, he still likes to do his favorite dance moves. We can only wish to be half as driven as him. And he has influenced several other frontmen after him – that says a lot.

If you only need ONE proof that Freddie Mercury is a great frontman, you have to watch Queen’s performance in Live Aid. Even Dave Grohl considers him as “the greatest frontman of all time.” The thing is, Freddie Mercury is phenomenal – he’s a prolific songwriter, multi-instrumentalist, talented singer and just a stellar performer through and through.

“That was entirely down to Freddie. The rest of us played okay, but Freddie was out there and took it to another level.” – Brian May on their Live Aid set

He could captivate the audience for hours with no theatrics or crazy antics – well, maybe exclude the time he sang while riding on Darth Vader’s shoulders. His stage presence and charisma were as legendary as the man himself. He possessed so much drive and energy that always left the crowd in awe.

He obviously loved performing and it showed. With just one song, he could connect with every single one of his fans. Freddie Mercury was a league of his own.

This man needs no introduction. Charisma, stage presence, showmanship, unique and beautiful voice – he has it all. Of course it’s a huge plus that he looks like a god – with that golden mane and oozing sex appeal. Yup, he’s the whole package.

You see, like Roger Daltrey, Robert Plant was surrounded by uber-talented musicians. From John Bonham and John Paul Jones to Jimmy Page, it takes a lot to front Led Zeppelin.

“Things just come past me. If I was a DJ on the radio, I would get all the new material I could ever wish for. Sadly I’m not, so sometimes I miss things completely. It’s a big world, music, now, and some of it gets to me and some of it doesn’t.” – Robert Plant

His performances were always intense, powerful and had that otherworldly feel to it. At the height of his career with Led Zeppelin, he was unrivaled. And he’s the only one who can pull of singing about Lord of the Rings (and Gollum!) and Greek Mythology without sounding cheesy. Yup, that’s Robert Plant for you.