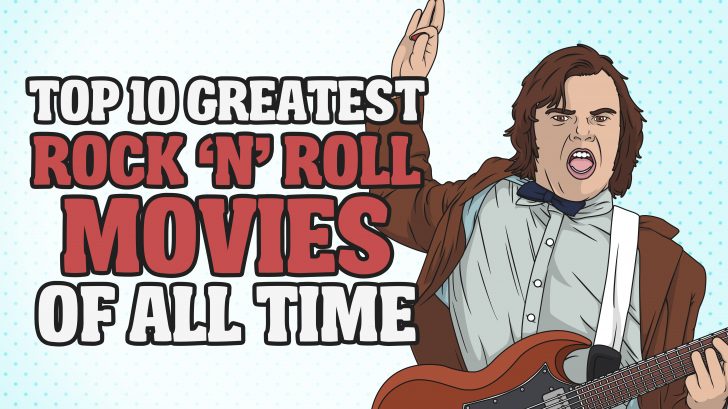 Grab some popcorn and watch these rockin’ flicks!

The movies are as much a big part of cultivating culture as it is music. Many times the best of both worlds collide and we have Rock n’ Roll movies that feature not just stellar actors and big plots but also some of the best music in history. The soundtracks of such films leave an influential impact on audiences even if they’re not into rock music fans, to begin with. Whether it’s a big blockbuster, artist documentaries, biopics, or musicals, these rock n’ roll movies have defined generation upon generation.

Rock n’ roll movies should have a genre of their own.

If you wanna see some amazingly talented kids crush some Deep Purple, then this is the film to watch. Now a major Broadway musical, 2003’s ‘School of Rock’ introduced the wonders of classic rock to the young generation of that time (now the Millenials). Starring comedian and rock enthusiast/musician Jack Black, we follow his character, Dewey Finn, a struggling rock musician who is also defined as a ‘fat loser’, wind up teaching a bunch fifth graders who happen to have impressive musical talents. He ends up signing up his class to a battle of the bands in a turn of hilarious events.

With the main character named Randall “Pink” Floyd, this film is an automatic candidate for this list. Ben Affleck stars as the high school bully that hazes freshmen, but this coming-of-age movie is basically about bored stoned teenagers celebrating the last day of high school. Isn’t that how most punk rockers start their career? The film has countless classic rock moments to watch out for.

The Commitments tells the story of a working-class soul band in Ireland and their struggles to get to the top. The movie follows the members through their ups and downs of breaking into the industry. The soundtrack features the original cast playing classics by Al Green, Aretha Franklin, Otis Redding and Mary Wells.

It’s THE Beatles movie that could’ve gone wrong but thankfully did not. The film revolves around the legendary band traveling to London from Liverpool for a TV show appearance and going through some crazy fan experiences. The screenplay was written by Alun Owen, paving the early beginnings of what seemed to be a scripted reality-type show.

Not the greatest of biopics, but it does star tweeny-bopper superstars Kristen Stewart and Dakota Fanning portraying the life of Lita Ford and Joan Jett when they were part of the punk band ‘The Runaways’ in the late ’70s. Put another dime in the jukebox!

Written by The Who’s Pete Townshend, it seemed like most of rock’s greatest people wanted to take part of the film. Eric Clapton, Elton John, and Tina Turner had supporting roles this movie about a young man named Tommy (played by Roger Daltrey) who stumbles upon a pinball machine and discovers he is a natural prodigy at the game. Bizarre moments include Ann-Margret rolling around in chocolate and champagne and getting nominated for an Oscar for the role.

Probably one of the most popular rockstar films of all time, Almost Famous certainly made an impact in the music and movie industry. Jerry Maguire director Cameron Crowe wrote and directed this film about his own time as a teenage rock journalist. Funny enough, internship applications for Rolling Stone magazine were off the charts after the film gained a following. It also turned Kate Hudson into a star, made “Tiny Dancer” one of Elton John’s most beloved songs of all time.

It’s Elvis Presley throwin’ it down as an ex-con!

It’s probably one of the earliest “mockumentaries” ever made, and at the time of its release in 1984, people still didn’t understand that concept. Ultimately, many viewers were somewhat confused and left to believe that the film was a real documentary about a real band. Ironically, Spinal Tap, though fictional, did record three legit albums in real life.