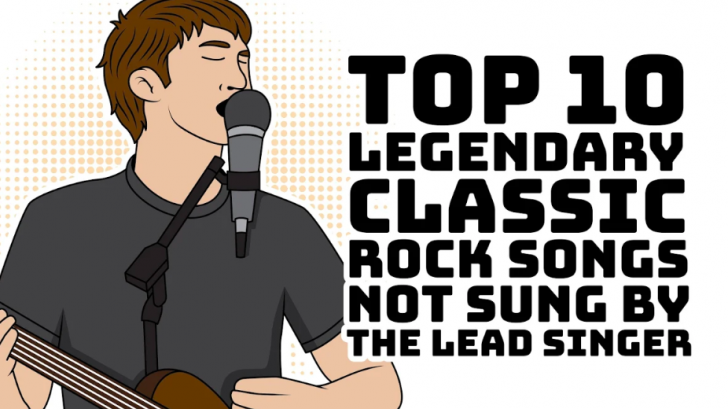 It’s something that’s not really talked about much but bands are closely associated with their lead singers. They are called frontmen and frontwomen for a reason: they are the face (and voice) of a rock group. However, there are times when a band switches things up and lets the audience know that other members of the band are equally (sometimes even more) talented, vocally. In fact, some bands’ biggest hits were NOT sung by the lead singer at all. Magic happens when the frontman or woman takes a backseat and passes the mic to somebody else.

The second track on their album Use Your Illusion II, “14 Years” was guitarist’s Izzy Stradlin’s time to shine on the microphone. Stradlin is a superb songwriter and has contributed to writing many songs for Guns N’ Roses, the band which he co-founded and recorded four studio albums in total. “14 Years” was not the only track on the album he sang lead vocals in, other tracks where Axl Rose took a backseat include “Dust N’ Bones,” “You Ain’t the First” and “Double Talkin’ Jive”. After Use Your Illusion II, Stradlin eventually quit the band. During their 2012 reunion, he sang “14 Years” again to the delight of fans worldwide.

This song was written and sung by Jimi Hendrix Experience bassist Noel Redding, the first track written for the album Axis: Bold as Love, the band’s second studio record. The song had obvious influences from The Who and it was one of the few songs Hendrix played that was written by another member of his band. Redding wrote another song called “Little Miss Strange” on their follow up album Electric Ladyland released in 1968.

The song surprisingly doesn’t feature vocals from any of the Wilson brothers, neither from Mike Love. Though Brian Wilson did co-write the song along with Ray Kennedy and Van Dyke Parks, it was South African singer Blondie Chaplain who sang lead vocals for “Sail On Sailor” from their 1973 album, Holland. Dennis Wilson did try to do the lead vocals for this track at first but it didn’t work out. Next, Carl Wilson tried it but had suggested Blondie Chaplain be featured instead. It proved to be a successful decision to let the spotlight shine on Blondie Chaplain.

Cheap Trick – “I Know What I Want”

This Velvet Underground-sounding track from Cheap Trick’s 1979 album Dream Police features not Robin Zander’s lead vocals but bass player Tom Petersson’s. And fans totally embraced the bassist’s lead vocals and can’t even get enough of it. Though it’s quite unusual for the uber-talented singer Zander to take the back seat on songs, the move to have Petersson take over the mic an inspired one. Tom Petersson’s unique sound totally worked with the song’s brutish hard rock character.

The song is from the Doors’ 1969 album The Soft Parade. “Runnin Blue” was a tribute to Otis Redding who met his demise at only age 26 due to a plane crash in 1967. The backstory being that the Doors were supposed to be scheduled to play with Redding at the Winterland Arena the same month he had died. Surprisingly, it wasn’t Morrison who sang lead vocals rather it was guitarist Robby Krieger. It is the only Doors song without Jim Morrison as the primary vocalist while he was alive. Robby Krieger went on to sing lead vocals after Morrison’s death when the band continued on between 1971 to 1978.

The Eagles – “Take It to the Limit”

This 1975 single from their album One of These Nights featured original bassist Randy Meisner on lead vocals. Meisner also takes songwriting credit for this song which reached number four on the Billboard charts and thus became one of the Eagles’ most successful singles, reaching gold status. Glenn Frey shares, “I just remember being very happy for Randy. We had tried, unsuccessfully, to get a piece of material for him — or from him — that might be a hit single … We finally succeeded with ‘Take It to the Limit.'” However, two years later when an unwell Meisner declined to perform the song on stage, him and Frey got into a big fight which led to Meisner quitting the Eagles.

It’s sort of unusual to listen to Queen without the power vocal prowess of Freddie Mercury. The band is already associated with his legendary iconic out-of-this-world vocals. “39” is a track from the band’s 1975 album A Night at the Opera and it is a song that has a rare characteristic: it was sung by guitarist Brian May. Yes, Freddie Mercury took a back seat and let Brian May lead away in this soft country song, though Mercury still sang it in concerts.

Inspired by the birth of his son Brandon with then-wife Pamela Anderson, drummer Tommy Lee penned this song to his newborn baby. He not only wrote it but sang the strings and piano acoustic track as well. He sang the lines “Your mother gave birth to you with love inside,” as a tribute to his new family back in 1997.

The Sex Pistols – “No One Is Innocent”

This song was written when the band was already breaking up with Johnyy Rotten having left the band. Still, Paul Cook and Steve Jones continued with the band, writing new songs and recording new music. They went to Brazil to write a song with Ronnie Biggs, a British criminal notorious for being part of the 1963 Great Train Robbery. Steve Jones said in an interview with Mojo Magazine, “Ronnie Biggs rated himself as a bit of a poet, and I remember sitting in the hotel room writing the music while he wrote the words. It was a big accomplishment, to write a song with an infamous train robber. That was a good move.” Biggs also sang the lead vocals on this track. The song was featured in their album The Great Rock ‘n’ Roll Swindle and reached Top 10 in the U.K. charts.