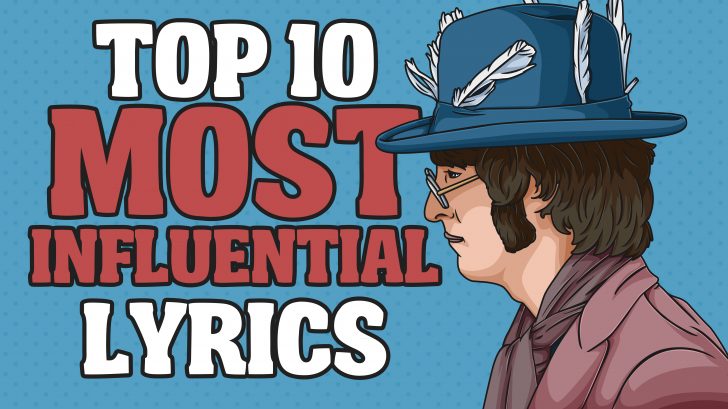 Music has always had an impact on the lives of people throughout the world. Lyrics of songs play a big part on that effect through the imagery and language it portrays. People’s brains absorb the subliminal messages song lyrics give out and even influences the way we think about certain things. The words in a song can have an empowering role to listeners and can even have a significant cultural and political impact on real-world events. Here are 10 songs that have the most influential lyrics:

The Times They Are a-Changin – Bob Dylan

This song, released in 1964, was Bob Dylan’s deliberate attempt to create an anthem of change for the moment. The lyrics speak to and inspire the frustrated youth to cause social change movements all around the world. It has influenced, throughout the decades, people’s views on politics and society. The song’s lyrics have a lasting message of change.

Let It Be – The Beatles

This song is the title track of the Beatles’ final album. It was inspired by a dream Paul McCartney had wherein his mom (“Mother Mary”) came to him to assure him everything was going to be alright. The gospel-inspired music was Macca’s way of coming to terms with the end of the Beatles. It embodies hope and comfort in finality not just in the Beatles’ lives but also serves as an encouragement to the entire world to just ‘let it be’.

And when the brokenhearted people

Living in the world agree

There will be an answer, let it be

‘Imagine’ is John Lennon’s legacy to the world. The song in itself has been controversial in the many opinions in the real meaning of its lyrics. Lennon inspires the world to incorporate their imagination in the right way to make things better for humanity. It is polarizing and unifying at the same time, that is why the words are so powerful. Lennon emphasizes empathy and open-mindedness in his lyrics to promote unity among all kinds of people. He brought out his message in the most successful way.

This masterful mammoth of a song about a man who killed someone and sold his soul to the devil and every other ridiculous thing is one Queen’s biggest song ever what with the operatic climax and cock-rock instrumental that defined it. And its music and lyrics have an undeniable cultural impact. The band has never revealed the real meaning of the song and every listen is up for different interpretations. The words tell a story in a sort of theatre play. It speaks of confusion, nonchalance, regret, judgment, anger, and resignation. Freddie Mercury’s ambitious idea became one of rock and roll’s most iconic songs.

Mama, life had just begun,
But now I’ve gone and thrown it all away

“Stairway to Heaven” is the most popular rock song of the past forty plus years. They say it’s overrated but its popularity has transcended through the decades and it remains significant even to this day. The song’s lyrics have also caused some controversy, especially with its alleged “satanic” subliminal meaning when played backwards. It is confusing to a point, as the words convey a mixture of unrelated themes but essentially, the ‘stairway’ part in the song is about trying to find happiness through material wealth. It’s a sort of journey in search of meaning. The lyrics recall Romantic poets like Keats, and the song is in constant evolution.

“Dream On” is possibly the greatest power ballad that Steven Tyler has ever written. The words speak of the power of what else dreams can accomplish. It is a celebration of life and also about “the hunger to be somebody”. It’s a very reflective song and it encourages the listener to carry on with life and not to give up on one’s dreams even though they are unable to change the past. It also acknowledges that death is inevitable and it could come at any time so, it inspires us to “live for the moment”.

This nine-minute long epic ballad is the product of when Guns N’ Roses experimented with longer material. “November Rain” would go on to become one of the most famous songs of the band’s career. It is also the oldest music video ever to achieve the billion-views mark seeing as the video came out 26 years ago in 1992. That’s 14 years before YouTube even came into existence! That just speaks of how much people want to listen to this song throughout the years. It is considered one of the most touching, emotionally-intense and well-written rock ballads. It’s a masterpiece that moves the listener through the beauty of its words. Essentially, it is about a young man seeking for reprieve as he navigates the struggle and turmoil of being in a relationship. It tells of a story of the realization that two people should find a way to be together but if it doesn’t work, it’s better for both of them to part ways.

Contrary to popular belief, this song isn’t called “Teenage Wasteland.” The line “Teenage Wasteland” doesn’t actually appear at all in the song but it came to Pete Townshend when he saw the hundreds of thousands of youth in Woodstock who were obviously wasted from all the drugs and booze. Many teenagers could probably relate to the line. Ultimately the lyrics talk about the fight for a better life. Aside from the hook of the song, it is the opening riff that remains one of the most widely recognized sounds in rock n’ roll.

One of the most legendary protest songs of all time, Sam Cooke expresses the hardships a black man goes through in 1960’s American society. It is considered one of the most lyrically powerful ballads in music. Tragically, it was released as a single only posthumously, shortly after Cooke’s untimely death. Historian Dave Marsh said that “A Change is Gonna Come” “ranks with Martin Luther King’s best speeches as a verbal encapsulation of the changes black perspective underwent in the Sixties.”

The song’s power and relevancy still resonates even 50 years on.

It’s been too hard living, but I’m afraid to die
‘Cause I don’t know what’s up there beyond the sky
It’s been a long time coming
But I know a change is gonna come, oh yes it will

“Sunday Bloody Sunday” is considered as one of U2’s most powerful songs and certainly their most outrageously political one in Northern Ireland’s history. It speaks of the troubles felt in Northern Ireland during the time when British troops brutally shot and murdered unarmed civil rights protesters and innocent bystanders one Sunday on a march against confinement. The lyrics were strongly anti-terrorism and caused some controversy and threats against the band. Because of that, the lyrics were changed to ensure the safety of the band and their families. Ultimately, the lyrics were written to promote a message of tolerance.