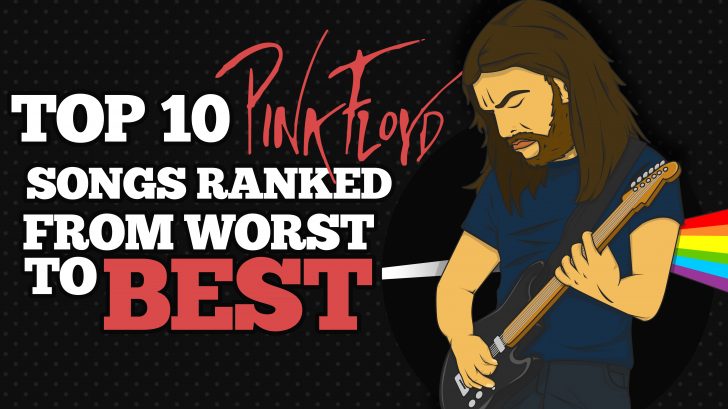 Roger ‘Syd’ Barrett, Roger Waters, Nick Mason, Richard Wright and David Gilmour, these five are one of the most well-known geniuses in their era. Pink Floyd has brought awesomeness into this world as one of the best progressive rock bands who have expressed their hearts and talents through music. The band earned their place as one of the most influential rock and roll band, next to The Beatles, The Rolling Stones, and Led Zeppelin.  Selling over 250 million worth of records! Who need drugs when you can get high with Pink Floyd’s musical experience? Sit back and relax as we go on for the list of Top 10 Pink Floyd Songs Ranked: From Worst to Best.

It appears on The Wall album (1979). The song has some intriguing meaning to it, a person who wants to connect with other people. Being isolated for so long trapping yourself into a void as you build that wall up high where no one would want to help, no one could hear you and no one listens as you lose yourself in the process.

Who could not like listening to this song, this is music indeed where you can slap meaning to it while you cope up with your problems.

As this song also appears on The Wall album (1979), it shows how lyrically genius Pink Floyd are. The song definitely talks about WWII and you can also apply it to any war that had happened in the past.

I have no idea who puts the bad idea in people’s mind, that some of these people are disliking the Floyds!

As this song talks about war, it also talks about not losing hope as we fight the war within ourselves and it’s a reminder that there will always be someone out there who will be willing to help as we pick ourselves up.

A track on their 1973 album The Dark Side of the Moon. You’re a hypocrite if you don’t like this one. Who in the right mind does not like Money??

Oh wait, are we really talking about the Benjamin here?… Well, I guess so, because the song is about Money literally that makes us realize we are all one mind when it comes to greediness and we all have that hunger for it… But the real message of this song is we have to share what we have, stop all that greediness and insanity, be fair and help those people who are in need of it…

I gotta tell you this, do yourself a favor and listen to this song with headphones as you emerge yourself into the world of pleasure of awesomeness as the guitar solo on this track will prompt you to hit the replay button over and over again.

A song, written and composed by original vocalist/guitarist Syd Barrett, was the first track featured on their debut album, The Piper at the Gates of Dawn (1967). This is really the work of a genius! Sounding like that in 1967??! That’s something, mate!

The guitar licks will get you every time…And that space talk in that transmission, incredibly genius… You just hope that no one could dislike Pink Floyd.

Just wooww!… Syd Barrett! You really wish that he never had left the band! Total brilliant! The end…

We are nothing but echoes in the universe.

Written in 1970 by all four members of the group for their album Meddle. This song will take you in another dimension and a sudden thought of your own existence. A beautiful song that will bring you tears of joy while listening to it.

The evolution of music! This song is great from beginning to end, the melody, the harmony, the music and the lyrics, just perfect… Everything about this song is mind-blowing!

As the song starts with the ping sound and as it goes on, until the melody raises up, the chills it brings will certainly make you notice that something is going on and that this song would become one of the epic Floyd’s track!

The final track featured on their 1967 debut album, The Piper at the Gates of Dawn. The song really sounds so British, and it’s really hilarious! It may be a strange one, but this song is just plainly awesome!

Every bit of Syd Barrett’s stuffs are a genius at work! Whether this song has meaning or none at all or it may be a love song or whatever the hell it is. One things for sure you will surely love that quirkiness and uniqueness of its sound.

Just shut up and take my money! I want that bike!

4. “Welcome to the Machine”

The second song on Pink Floyd’s 1975 album Wish You Were Here This one is creepy, it looks like the band is predicting something that might happen soon, like Terminator or something, that we are now consumed by technology.

You hear that sound at the beginning? That’s definitely a Machine sort of starting up. The intense strum of that acoustic guitar then the vocals, so intense.

Why is that many people don’t listen to Pink Floyd? Huh? Pink Floyd did some amazing things and this is definitely one of them.

I don’t need your brutal education!!!

It was released as a single and provided the band’s only number-one hit in the United Kingdom, the United States, West Germany and many other countries. Contrary to the song lyrics, the song really indicates that we need education and it’s essential to life… The song is more like an education reform.

But wait, what make this song as a  top 3 on our list? Well, this song comes out sounding like an anthem for “No more schooling”, like the song “School’s Out” by Alice Cooper and that blues solo of David Gilmour full of awesomeness, purity  and perfection, it  shows how genius the song is. Progressive, Disco and Blues all in one!

Which first appears on the 1979 double album The Wall. We all have felt this Numb once in our lifetime.. PF really know what’s going on in our heads, that’s why we really can connect with their songs. It’s like every song of theirs represents what we are going through in our lives…

This specific song is the reason why Pink Floyd is one of the greatest gift that music has given to us. It will give you goosebumps in just a sec, until you reach to the point where Gilmore plays the solo part and you start to realize that you don’t need all that speed and technicality to produce one of the greatest guitar solo of all time!

Wish You Were Here is their ninth studio album. A song dedicated to their late guitarist Roger Keith “Syd” Barrett. The song has made an enormous impact in the history of rock. And I guess, without Syd, Pink Floyd wouldn’t probably existed.

There’s too many to pick on which one is the very best song of Pink Floyd. But you can’t argue with this one, as this is really is their very best, you just can’t deny that.

We all have that someone that who has an impact to our lives and as they go, there is a part of as that we wish they’ve stayed. We just kind of turn this song to remind us of these same people…